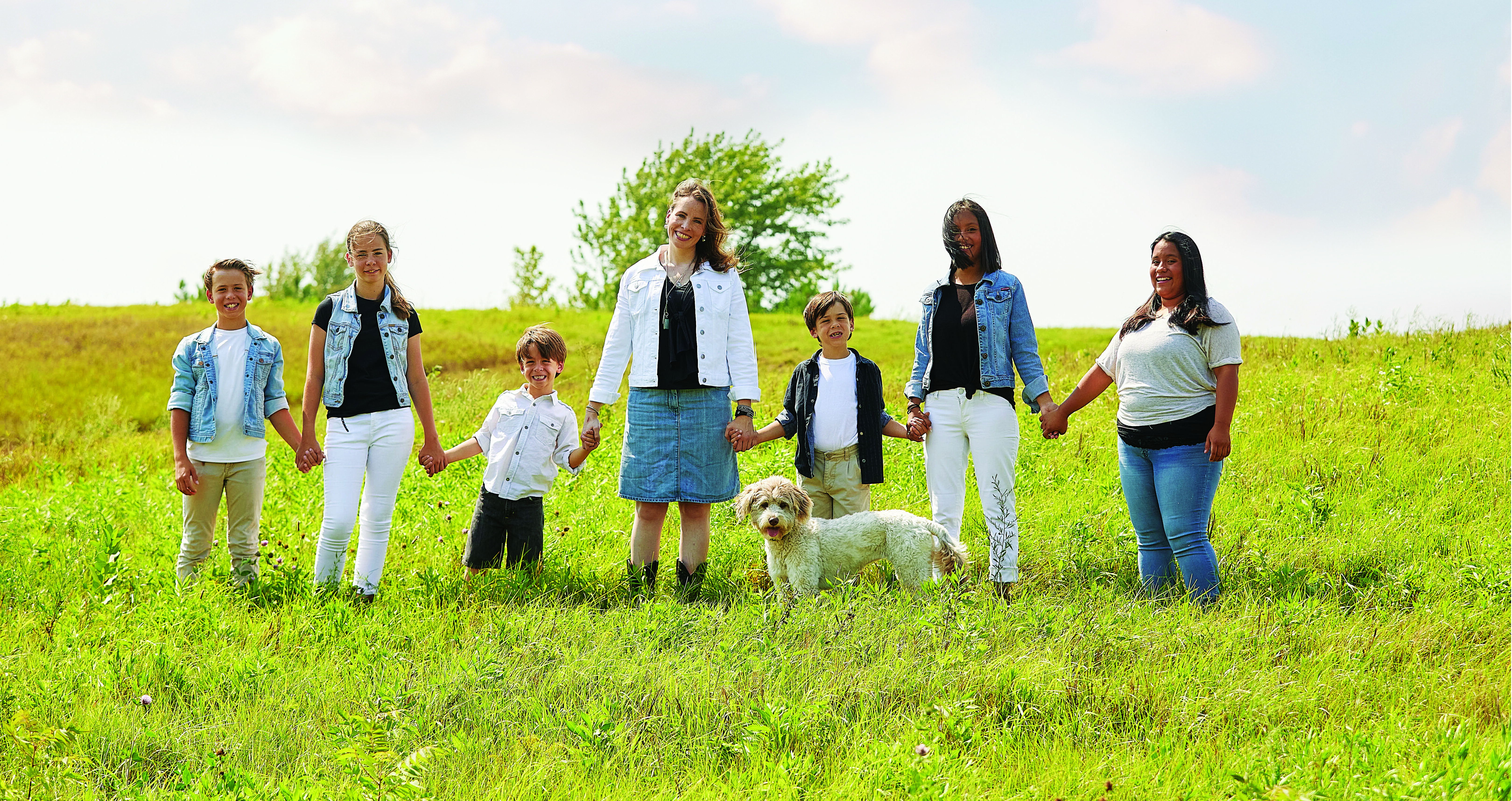 Through personal trial and physical agony, Kendra’s Faith saves her

A single mother of six, with cystic fibrosis, Kendra Behnam of River Falls knows pain and suffering. Triumph over tragedy came from the love of her family and her unwavering Faith in God.

“There can be such incredible darkness around us and such trials that we feel swallowed up,” says Kendra. “We have to hope in the Lord and trust how good He is.”

The youngest of Gary and Kathy Tapp’s four daughters, Kendra and her oldest sister, Bridget, were both diagnosed with cystic fibrosis (CF). Despite the 10-year age difference they shared an unbreakable bond.

“Every cystic fibrosis story is different. It’s so individual, even for siblings. Having Bridget to look up to, was such a blessing.” Kendra says.

According to Kendra’s Mayo Clinic pulmonologist, CF is an inherited disorder causing severe damage to the lungs, digestive system and other organs. Decreased lung function often requires a lung transplant.

“Nutritional deficiencies, along with the calories we use for coughing out the secretions, make it very difficult to have a stable healthy weight. Weight loss has always been a precursor to my hospital stays,” says Kendra. “We have a perfect environment in our lungs to grow bacteria. It’s like having an infection all the time in your lungs that you have to fight daily with treatments.”

“She had the most wonderful sense of humor. She had this exuberant faith-filled spirit that inspired me,” Kendra says. “No matter what she went through, she was smiling and found the cleverest way to  depict what she went through, making it humorous. She carried such strength even though her petite body said otherwise. She was an intelligent, selfless soul who allowed herself to be used for God’s plan.”

The sisters also shared a love of and gift for music. Bridget taught piano and flute, while Kendra sang and has taught violin.

“There was a three-day vigil where we kept watch over her,” says Kendra. “We all birthed her into heaven. It was a beautiful death, knowing she was truly being received into the arms of Jesus and Mary. Everything she suffered, she offered up. Bridget had an exemplary Faith-filled life.”

God would give me these little pebbles of hope. I would hear, ‘keep hanging on, I will heal you.’

After high school, Kendra felt the pull of both family and religious life. She discerned sisterhood with a religious order but determined God was calling her to motherhood.

At 20, Kendra married and, following a miscarriage, she and her husband decided to adopt. They brought home twin 9-month-old sisters from Guatemala, and, two years later, Kendra became pregnant with the first of four children born in the next seven years.

Kendra thrived and found joy in motherhood. Her children have been miracles of love.

Unfortunately, between CF and marital problems, family life was not ideal. The love and support of her selfless parents and sisters, Meggan (Jason) and April (Joe), provided stability.

Family also included her parish, St. Mary of Big River. Faith was Kendra’s foundation—thanks to her parents—and she is giving the same foundation to her children.

“My St. Mary’s family provided spiritual uplift, as well as meals for my kids and me, cleaning of my house and caring for my kids,” says Kendra. “They, along with Father Kevin Louis and Deacon Dan Gannon, have carried me with their prayerful loving hearts through my struggles. I am so blessed to be a part of this beautiful parish family. It is a sweet treasure in the countryside that I cherish and thank God for every day.”

In 2006, Kendra’s CF worsened, and, for the next 14 years, she would struggle with many hospitalizations, collapsed lungs, anxiety and all the complications from living with the disease. Through all the pain and fear, Kendra felt the presence of God through prayer and the reception of holy Communion.

In her pain, Kendra offered her suffering up to Jesus and felt her sister Bridget’s loving care when she needed it most.

“Turning 28 was scary because I didn’t know what to expect beyond the age my sister was when she passed. Am I going to die now? I struggled so much,” Kendra says. “My mom knew this and for my birthday, she presented me with this beautiful prayer she wrote.”

The prayer was to St. Pope John Paul II. Kendra’s strong devotion to him deepened after attending World Youth Day in Toronto at age 19. “To this day, when I see him, it brings tears to my eyes because it was life changing. He was just an incredibly holy man and you could sense it,” she says. “The prayer my Mom wrote asked for his healing intercession along with Mother Mary and my sister Bridget. Mom made prayer cards and handed them out to all our family members and parishioners. We memorized it and added to our nightly prayers.”

Prayer was also vital when Kendra discovered she was pregnant with her youngest son. Kendra and her husband had separated because of marital problems, requiring her to make the journey alone.

Throughout the pregnancy, Kendra’s CF worsened. A lung collapse and hospital stay happened at 11 weeks and again at six months.

A lung infection spurred coughing attacks so bad that one of her ribs was pulled out of place. The rib block designed to give her pain relief collapsed her lung and led to a 21-day hospital stay.

“While the doctors were figuring out what had happened to me during the procedure, it felt as though time stopped. I really felt Bridget’s presence,” Kendra says. “I remember being so calm even though I was in such extreme pain.”

Fervent prayer helped Kendra cope. “I knew the Lord was calling me to do heavy work at the time and that he was giving me the strength and grace to do it, just like he did to Bridget,” she says. “My resolve to believe in His love for me despite whatever happened, along with my Mom’s unwavering and encouraging reminders, were a consistent coping strategy.”

Her life has included joy and agony, but Kendra focuses on the joy. During the past seven years, God and Bridget reached out to help Kendra stay the course and trust.

Despite the desperate situation Kendra’s husband left her in seven years ago, she was protected. People who did not know Kendra would gift her with what she needed right when she needed it most. Her parents bought land near St. Mary Church where her dad and parishioners built a rambler house, allowing Kendra and her children to finally have their own home.

“Those are some of the many ways God would give me these little pebbles of hope,” Kendra says. “I would hear, ‘keep hanging on,
I will heal you.’”

In 2019, Kendra was losing strength. “I was excessively fatigued all the time, which didn’t allow me to be the mom I desired to be. The duties I had as a mother were often going to other people,” she says. “It made me so sad because I wanted to be more physically present with my children.
I said to God, ‘I don’t know how to be a mother to six children the way I am.’ I was literally asking the Lord to take me.”

In late summer, 2019, Kendra learned of the new CFTR modulator drug Trikafta. “I heard it was doing amazing things and my mutation of the gene was eligible,” says Kendra. “We started to pray.”

The drug was approved by the FDA early, on the eve of the feast of St. Pope John Paul II. On Jan. 17, 2020, one month after the 18th anniversary of her sister Bridget’s death and nine years after beginning prayers to St. Pope John Paul II and her sister, Kendra took her first dose of Trikafta. “Seven days after starting the drug, I completely stopped coughing,” she says.
“I could breathe.”

This miracle gave Kendra back her joy. “I could sing again. Music is my soul. I love to sing and play music for Our Lord,” says Kendra.

Kendra’s voice sang out after seven years of near silence. She led parishioners in song for Lent and Holy Week during the live-streamed Masses.

“For weeks, I would cry in gratitude,” Kendra says. “It’s been an incredible joy to be part of something so astounding. Unexpectedly, in November 2020, I became the director of the parish youth choir. It’s been a journey of so many things, with so many emotions and gifts of Faith. I have such joy and gratitude for my Faith, and the ability to finally be able to give back through the gifts that God has given to me.”

As she grows stronger, Kendra loudly sings the praises of a caring and loving God to everyone she meets, thankful for the love of family on her healing journey.