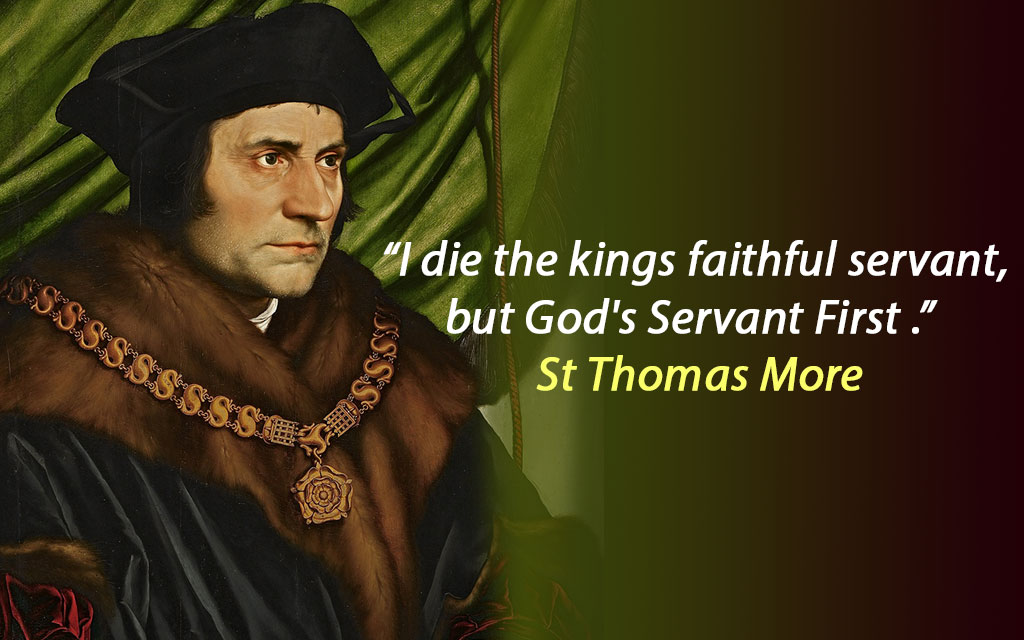 A Man for all Seasons

If you’d ever met Thomas More, you probably would have been one of his friends. By all accounts, this 16th century English saint radiated joy. He loved wordplay and jokes, but never at anyone’s expense. His home was full of pets and rare animals, for his enjoyment as well as his children’s. And he liked to collect odd and attractive objects because he delighted in the pleasure others felt when they saw and enjoyed his treasures. More’s close friend Erasmus once wrote of him, “If you want a perfect model of friendship, you will find it in no one better than in More.”

More had a happy family life, too. He was an affectionate husband and father of four children. He was deeply involved in his children’s religious, moral and intellectual education, and he and his family attended daily Mass together. He enjoyed games and fun, and encouraged everyone in his family to play a musical instrument. He had high standards, but he believed that one could aim high and still have a good time.

More studied law at Oxford, and his successful legal career led him to Parliament. It wasn’t long before this intelligent, outgoing, virtuous man caught the attention of King Henry VIII. The king appointed More to a number of high posts, ultimately naming him lord chancellor in 1529. Life couldn’t have been better for Thomas More.

But three years later, More resigned as chancellor because he could not support the king’s views on divorce and remarriage and the supremacy of the pope. When More resigned, the king stripped him of his lands and wealth; many friends deserted him. Even so, More continued to write in defense of the Church. In 1534, he and his friend, Bishop John Fisher, refused to swear allegiance to the king as the head of the Church of England and were confined to the Tower of London.

More stayed in the tower for 15 months, and his letters to his daughter, Margaret, showed his continued faithfulness and his unwavering moral stance. Through it all, he also maintained his good humor. Even when John Fisher was executed, More refused to acknowledge the king’s supremacy over the Church of England. So, he, too, was tried and convicted of treason. He told the court that he could not go against his conscience. As More went to his death, he told the crowd he was dying as “the king’s good servant—but God’s first.” More was beheaded July 6, 1635.

In 1886, together with 53 other martyrs, including Bishop John Fisher, Thomas More was beatified. Pope Pius XII canonized him and Bishop Fisher in 1935, 400 years after he was martyred. St. Thomas More is the patron saint of lawyers. In October 2000, Pope St. John Paul II named him patron saint of statesmen and politicians. His feast day is June 22.