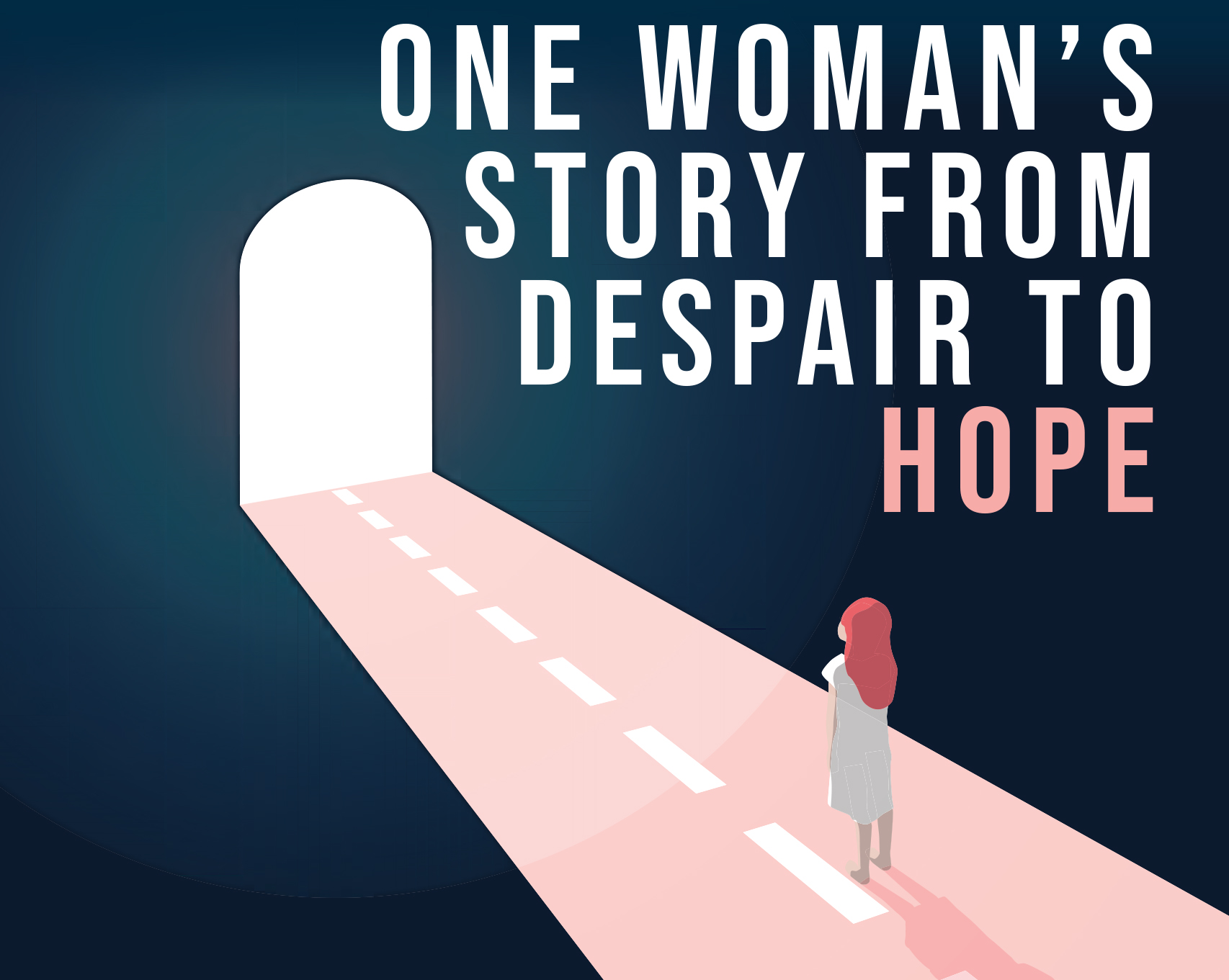 One woman’s story from despair to hope

Human dignity presents itself in many forms. As Catholics, we are called to protect and respect all human life, but what happens when physical, mental and sexual abuse is ignored? Not only are the victims trapped and feel helpless, but the abusers continue their crimes against humanity. Thankfully, local organizations exist not only to intervene during these times, but also to help in the healing process and educate those who can provide a way out.

Human trafficking can easily be thought of as occurring in foreign countries, impoverished areas or large metropolitan cities. Living in rural Wisconsin does not mean this crime is outside our concern. What follows is a true story of one woman’s heart-wrenching experience as a victim of child sex trafficking and how Fierce Freedom, an organization in Altoona, continues to help in the recovery from her childhood nightmare as she transforms her years of despair into hope.

In the late 1950s, Cheryl Voyles was born into a home where domestic violence was extreme. Her father, a supervisor at a steel mill, continually abused the women around him to prove his masculinity. “From as early as we can remember,” Cheryl says, “my brother and I were aware of how our dad would abuse our mother.”

Though no drugs or alcohol were involved, his uncontrollable rage turned towards Cheryl at an early age. “My dad touched me when I was really young,” Cheryl says. “I remember the first time he came into my bedroom in a rage. He pulled me from my bed, threw me to the ground and sexually abused me.”

Cheryl was devastated and broken. She crawled under her bed and hid there all night. “That’s the first time I remember seeing Jesus with me.” She was only 4 years old. The next morning, her parents acted as though nothing happened. “That’s how they dealt with their violent relationship,” Cheryl says.

The summer before she started kindergarten, things only got worse. Two men showed up at her parents’ house and came to the back yard where she was. “One guy knelt down so he was eye level with me,” Cheryl says. “I was looking at the ground, so he raised my chin with his hand and told me what a pretty little girl I was and that he had nice things for pretty little girls.” Cheryl’s parents had sold her to an organized crime child sex trafficking ring that operated in the Midwest.

The men returned for Cheryl and took her to a dark warehouse where about 12 children were held. Most were girls, but there were also a couple of boys. The children were as young as 5 years old and controlled by several men. “That’s when they began the breaking process,” Cheryl recalls. “They were getting us ready to be sold. I was taught that I was nothing and unloved. They did torturous things to everyone and brainwashed us.”

The group included a couple of children from Cheryl’s community and others from different areas, perhaps kidnapped or sold by their parents. The ringleader was known to the children as the stablemaster. If a child couldn’t be broken to comply with their every demand and was deemed unsuitable to be sold, the stablemaster got rid of them. “When the stablemaster told the other men to get rid of a child,” said Cheryl, “it meant to us they were going to kill them because they were useless. I saw children die.”

Cheryl spent a lot of time at the stablemaster’s home. “He and his brother would constantly abuse me. They also trafficked drugs and I grew up around a lot of men who killed people for a living.”

Some children with Cheryl suffered more than she did. “One time, a client in his sexual activity with a boy killed him. Another time, the stablemaster’s brother brought a 5-year-old girl into the warehouse and hit her enough to kill her.”

Throughout that first summer, Cheryl was broken and groomed for higher clientele. She was then returned home to attend school so she wouldn’t be reported missing. She’d spend the evenings with her parents during the school week, enduring the abuse from her father. The crime syndicate would pick her up from school on Friday and keep her for the weekend, selling her at conventions, including hotels and motels, and wherever they could make money.

“I could always feel Jesus, but I couldn’t get to Him. With His help, I began healing and God lifted the burden from me.” – Cheryl

During the summer months, they would move her and other children throughout the Cleveland, St. Louis and Chicago areas, exploiting them to men of all ages and across the economic spectrum of society, while filming many encounters of the abuse. Abusers included judges, police, clergy, well-known entertainers, politicians, teachers and others in leadership positions. The children in her trafficking ring ranged in ages from 4 to 10 years old.

Cheryl’s cry for help went unnoticed. “I approached a teacher when I was 7 years old. I liked her and she would talk to me. One day, I told her I needed help and what was happening. I believe she looked into it, but never talked to me again. The school principal was a client and I think they threatened her. He always kept an eye on me.”

In the late 1960s and early 1970s, laws didn’t exist to protect children. No one ever questioned why two men in suits would pick Cheryl up from school on Fridays. This was acceptable at the time.

“The men would drop me off at home on Sunday nights,” Cheryl says. “After not eating all day, my mother sent me to bed hungry. I’d get up in the morning, eat breakfast and the cycle would start all over again.”

Her father’s sexual abuse continued, lasting until Cheryl was 20 years old. Her mother said nothing and, at times, pushed him away from her and towards Cheryl.

“I barely graduated from high school because I was so emotionally fragmented and suicidal.” Having only known violence her entire life, Cheryl picked unwisely throughout her young adult years. She went through many bad relationships with violent, narcissistic men, resulting in two marriages, two children and two divorces. At 26, Cheryl could finally see the disassociation and started working with a counselor.

Even with her violent upbringing, Jesus never left Cheryl’s side. “I could always feel Jesus, but I couldn’t get to Him. With His help, I began healing and God lifted the burden from me.”

In 1985, she talked with the FBI. They told her they could start an investigation, but it wouldn’t take long for the group to figure out where their information came from. “The FBI told me they weren’t capable of keeping me safe and to just get on with my life.”

Cheryl’s parents deny the abuse ever happened. “I talked with my brother 15 years ago and he remembered he didn’t know where I was when the men took me. He told me it was easier for him to believe I was crazy than for him to deal with the pain.” He and Cheryl haven’t spoken since.

Cheryl continued to struggle through life, reaching out for help wherever possible. In 2008, a close friend connected her with Jenny Almquist, founder of Fierce Freedom based out of Altoona. As a mother of young children, Jenny was introduced to the crime of human trafficking when she was visiting her sister in Australia in 2007. “My sister and I went to listen to a speaker talk about human trafficking. Before listening to the speaker, I didn’t even know that was a thing. I found out it’s the fastest growing crime on the planet!”

At the time, no groups in the Altoona area were involved with anti-trafficking. She began an organization named Fierce Beauty and sold items and gave talks to raise money and awareness of the crime. From there, Fierce Freedom was born. She currently has four employees, with a mission to educate the whole community through schools, law enforcement, medical providers and students. The nonprofit is instrumental in helping those affected by human trafficking, including current victims and survivors like Cheryl.

Jenny presents to groups and Cheryl tells her story. “Cheryl’s dramatic story is difficult for many to imagine. But, because of her courage, we are able to educate people about human trafficking and also help those impacted by it.”

Cheryl’s experience is a testament that human trafficking occurs in the rural Midwest, not just in a large city or Third World country, as those unfamiliar with the issue may believe. It is real and affects innocent lives. Human trafficking is widespread in central Wisconsin. In the past several years, Fierce Freedom has worked with people ranging in ages from 3 to 62, including more than 100 women, a few men and teenage boys.

Cheryl advocates for other victims. “I want people to understand it’s all around us. When Jenny and I speak to a room full of people, there’s always at least one person in the audience that’s been affected.”

To stop human trafficking, Cheryl believes we need to change as a society. “It’s part of the baggage we’re willing to accept in our culture. The judiciary system doesn’t help victims and it’s ingrained in our society. When people’s lives are going well, they don’t want to get involved. Others don’t want to get involved, afraid they could be threatened. Advocates don’t have a lot of support.”

Unfortunately, abusers tend to prey on disadvantaged children and those not connected to society. A few signs to watch for is a dominant male where the female may not speak at all. The male handles all the transactions and will be very close to the female when walking down the street. She’ll look uneasy and may keep looking around a lot. The balance of power will be off.

“The fact that we live in a world where children are being sold is a culture we can’t change overnight,” says Cheryl. “It’s a long-term process and everyone needs to be part of the solution.”

Jenny knows Hollywood hasn’t done any justice in helping solve the problem. “Movies and television show the dramatic kidnapping and people kicking in doors to rescue people. That’s not how it works. Be a constant in a youth’s life. That’s the best thing you can do to help someone caught up in human trafficking. Teach religious classes at your church, volunteer at the Boys & Girls Club. The everyday action of taking time to look them in the eye, remember their name and show them they matter makes a difference.”

Courage, strength and faith helped Cheryl change despair into hope. However, the vulnerabilities of marginalized children continue. Thankfully, groups like Fierce Freedom are there to intercede for others.

If you are, or someone you know, a victim of human trafficking, please contact Fierce Freedom at 715.514.2890 or the National Human Trafficking Hotline at 888.373.7888. More information on how you can help can be found on Fierce Freedom’s website at Fiercefreedom.org.

Published in the January/February 2022 Issue of Catholic Life Magazine