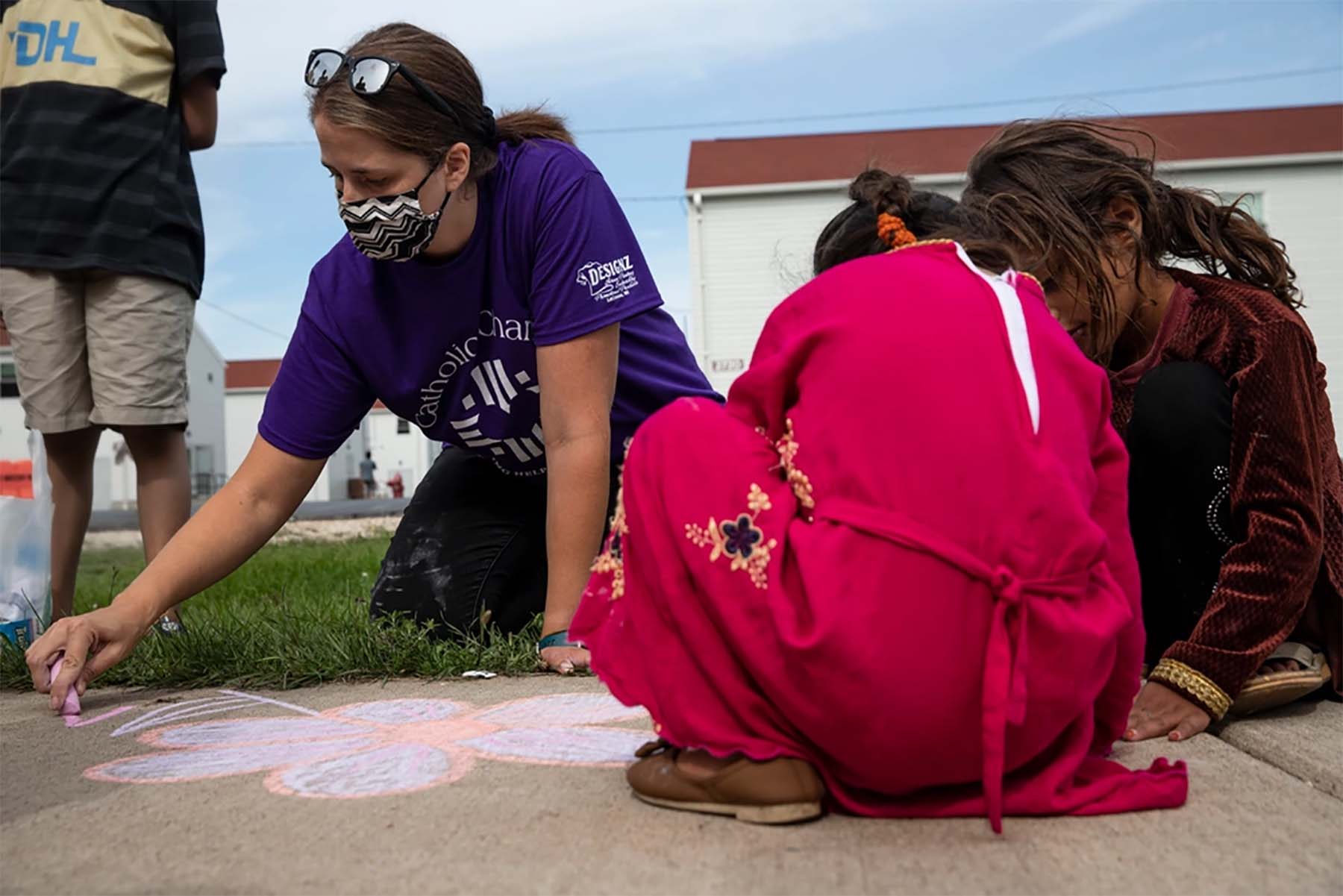 The Catholic Community of Wisconsin Provides Support for Afghan Refugees

As Christians, we take to heart the meaning of how we are to care for strangers as written in Matthew’s Gospel. “For I was hungry and you gave me food, I was thirsty and you gave me drink, a stranger and you welcomed me.” (Mt 25:35)

Monroe County, within the Diocese of La Crosse, has become a temporary home to more than 12,500 Afghans who have been displaced from their homeland as a consequence of political turmoil and unrest. For a moment, imagine what it would be like to be so far from your country. A stranger in a foreign land, where the language and customs are different, being unsure and perhaps a little fearful about what is going to happen next. Where will I go? How will I be treated?

When Afghan families and individuals, escaping from Taliban forces, started arriving in the United States, the U.S. Conference of Catholic Bishops’ (USCCB) Migration and Refugee Services team was working closely with several governmental and nongovernmental organizations to provide resettlement services. Once the refugees started coming to Wisconsin, the USCCB reached out to Catholic Charities of the Diocese of La Crosse for help. Catholic Charities of the Diocese of La Crosse, being closest to the Afghan families’ temporary housing, immediately mobilized their resources to provide for the basic needs of the new arrivals.

“By the time I got back on Monday, we had 500 people from across the state wanting to be part of this welcoming mission. It was actually the most amazing, immediate response that I have ever seen.”  -Karen Becker

“It happened so quickly,” said Karen Becker, director of marketing for Catholic Charities of the Diocese of La Crosse. “It was Thursday, Aug. 26, when Gov. Evers announced Afghan refugees would be arriving in Monroe County and, being in the heart of the Diocese of La Crosse, I knew that we would be called upon to help in some way.” Karen decided to use social media and the Catholic Charities website to ask people to sign up to help. “My phone immediately lit up. It has a direct link to our website. By the time I got back on Monday, we had 500 people from across the state wanting to be part of this welcoming mission. It was actually the most amazing, immediate response that I have ever seen.”

“Soon afterward, I realized we needed more help, so I reached out to the other Catholic Charities of Wisconsin and the support I received made real the mission of Catholic Charities.” Catholic Charities regularly provides essential services to immigrants and refugees as part of their mission as a matter of respecting human dignity.

At the same time, Archbishop Listecki of Milwaukee, Bishop Hying of Madison, Bishop Ricken of Green Bay, Bishop Callahan of La Crosse and Bishop Powers of Superior joined together to lend their monetary support to Catholic Charities of the Diocese of La Crosse and to urge Catholics to make donations to Catholic Charities or to support similar diocesan and parish collections. These monetary donations make it possible to provide socialization, wellness, recreation opportunities and legal assistance for Afghan guests as they go through the immigration process.

After the initial response, it became clear that Catholic Charities needed to set up activity centers as Afghan guests awaited the immigration process. In addition to two legal centers, Catholic Charities set up centers that focus on morale, wellness and recreation, MWR for short. One example is the creation of a sewing center for women. “One of our volunteers brought three sewing machines that she thought would be a good activity for the women,” said Karen. “It was so popular that we decided to open a sewing center and added 10 machines. Now we have two sewing centers with 60 machines and it is full every day with women sewing without patterns or measuring tapes: Just picking out fabric, sewing and, in about two hours, they have a garment to wear.”

Kathy and Gregg Hansel and Ginny Williams are three of the many volunteers who donate their time to meet with Afghans at the MWR centers. Gregg and Ginny both have backgrounds in education. Gregg works with children, while Ginny and Kathy work with both women and children. Each MWR building has two floors. The lower floor is for children and the upper is for women and small children.

Ginny has had many interesting experiences working with both the women and children. Ginny said she knew she would be comfortable with the children because of her teaching background but was unsure about working with the women because of the cultural differences. Ginny tells of the time she met a young woman who was one of the college student interpreters. “She started talking about her trip to the U.S. There was a lull in the conversation. I told her I was a teacher of young children and a school counselor. When I said that, her eyes just filled with tears and she just looked at me. And she said it just feels so good to talk to somebody. I’ve held this in for so long.”

Gregg remembers this experience. “There was a little boy who came in who couldn’t speak or hear, but he tried to make sounds. That was the day that I had blocks, cards and cups to build things with. He came over and played for an hour or two with me. The next day when his mother brought him, the little boy pointed at me and his mother waved at me and said, ‘OK.’ From that point on, anytime I was at that site, his mother would see me and nod, and so I think I gave comfort to his mother.”

Meeting the needs of such a large number of people requires many hands. A number of agencies and groups work together with Catholic Charities to provide volunteers and solicit donations of money, supplies, clothing, personal care items, etc. The biblical call to welcome the stranger or sojourner is clear: he or she should be welcomed, embraced and loved. We welcome our Afghan guests to Wisconsin and will do what we can to help them make a smooth transition.