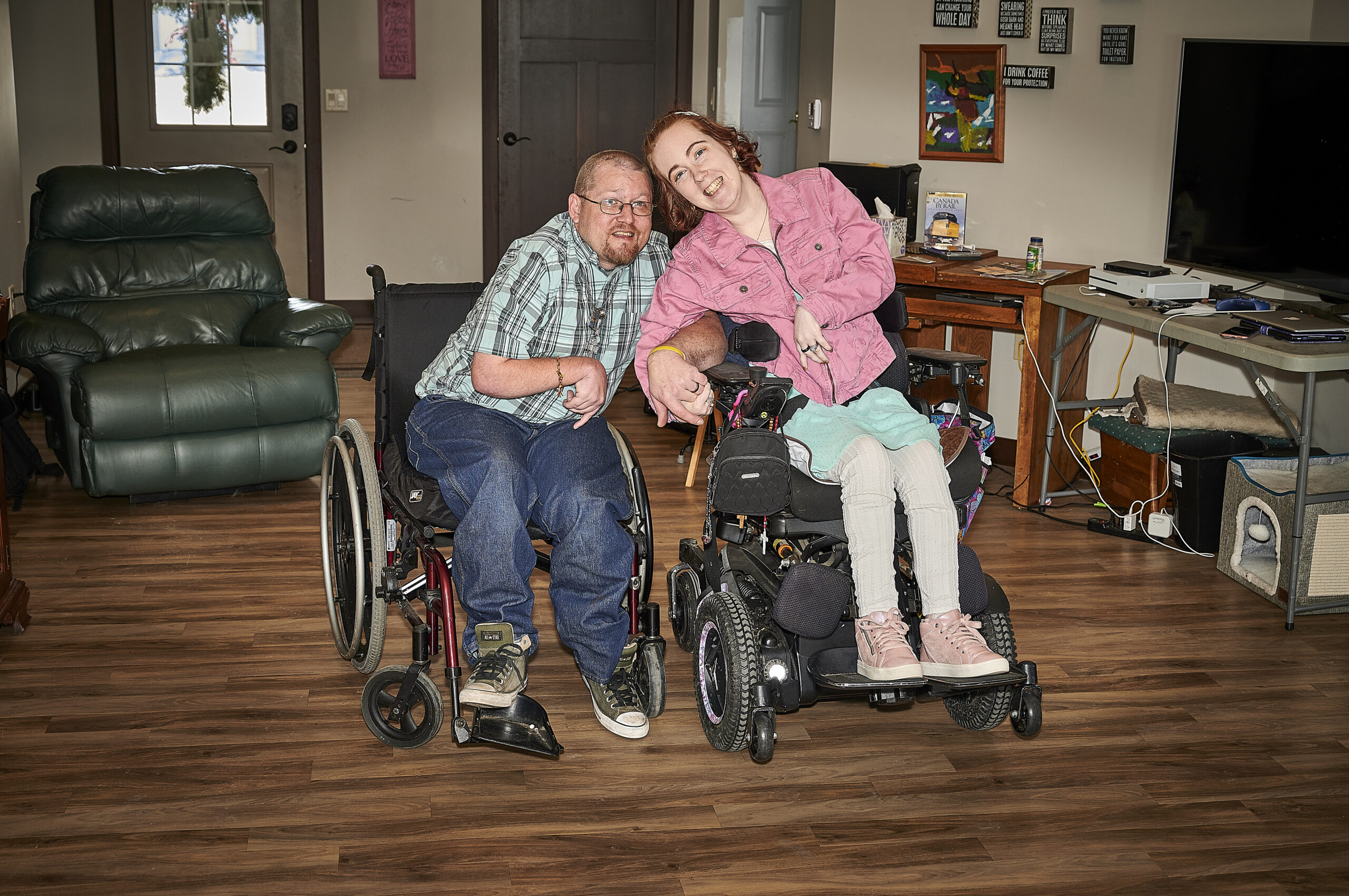 Aleka and Ben celebrate the gift of each other

Aleka and Ben Loux live in a modest, attractive twin home in Baldwin, about 30 miles east of Minneapolis/St. Paul, just off nearby Interstate 94 and about an 18-mile drive northeast of River Falls. A conspicuous and friendly welcome sign sits to the left of their front door. There is a slight delay after ringing the doorbell before Ben opens the door with a smile, a “hello” and an invitation to enter their home. A short while later, Aleka, with a smile on her face and a twinkle in her eye, and her mother, Meggan Husby, enter and join Ben in their living room. Gadget, the family cat, also decides to join the group.

Prominently displayed on the living room wall are their wedding pictures and mementos from two years ago. As Ben and Aleka glance at one another, one cannot help but notice in their eyes the love and affection they have for each other. How happy they are. How full of life they are.

As one reads this description of Ben and Aleka, it appears to be nothing out of the ordinary for recently married couples to behave in this way. However, Ben and Aleka are special people because when they both were very young, they were given a slim chance of living. The doctors said if they did survive, they would be physically handicapped, perhaps severely. Most certainly, they would face challenges in life foreign to most people.

Meggan said that Aleka was like any other baby until she was 14 months old. “She regressed from being able to walk along the furniture to being a complete ragdoll, couldn’t lift her head. She was like a noodle.” Aleka repeated, nodding her head, “Like a noodle, yup.”

The onset of Aleka’s condition happened quickly, within four weeks after receiving the IPV (inactivated polio vaccine). Polio vaccines are vaccines used to prevent poliomyelitis. Meggan said, “Aleka was hospitalized for several days and they ran all kinds of tests on her. They discovered that she was suffering from white matter disease, which we now know, that in Aleka’s case, was related to receiving the IP vaccine.” White matter is tissue in the brain composed of nerve fibers that’s covered by myelin (a type of fat). The myelin gives white matter its color. White matter disease is a wearing away of the myelin, resulting in the disruption of brain cells to send and receive messages. This leads to problems with motor skills, like walking and talking. The doctors told Meggan and Jason (Meggan’s husband) that the prognosis for Aleka was that she would not live to see her second birthday.

Naturally, they were disheartened. But they were determined “to love what was left of her life” and to help her with physical therapy, speech and various other activities to stimulate her brain. Aleka said, “In addition to my mom, Grandma Kathy worked with me. She was my first ‘care-giver.’” Meggan said, “I wanted to do the best I could. We had trust and faith in God, whatever His plan was. We just wanted to do the best job we could, believing that He was allowing this for a reason.” Aleka was their first child, and as 10 more siblings were born during the next 21 years, they were taught charity and patience at young ages, either helping Aleka, helping other siblings or waiting for mom while she facilitated Aleka.

Aleka is the biggest inspiration in my life.” – Ben

Ben suffered a traumatic brain injury resulting from an automobile accident when he was 15 months old. He was in a car driven by his adoptive mother. There was a collision with another vehicle and he was thrown headfirst through the windshield of the car and landed in the back of a pickup truck. Miraculously, he was alive. He spent the next six months in a coma. He said, “When I came into the emergency room of the hospital, the doctors gave me a 10 percent chance of living. They said if I survived, I would be nothing more than a vegetable.” Ben did survive and came out of the coma, but not without physical challenges that to this day affect his walking and speech.

As an only child of adoptive parents, Ben grew up on a hobby farm in Baldwin and attended school in town. “I grew up thinking I was an only child,” Ben said. “However, in 2019, I met my birth mother and happily discovered that I have a sister and a brother.” Ben did confess that until recently he did not know what to do with his life. He was searching for direction.

A pivotal moment in the lives of Ben and Aleka came when they first really met each other. Aleka would be attending, for the second time, National Wheelchair Sports Camp, which is held every year in Stewartville, Minn., at Ironwood Springs Christian Ranch, located just south of Rochester. Aleka knew of Ben from the prior year and learned through Facebook he lived close. “I found out Ben needed a ride to the camp,” said Aleka, “And I asked my mom if he could ride with us. She said, ‘OK.’”

It was a day or so into the camp that they began to talk to each other. In fact, Ben told Aleka, “I like someone at this camp.” It took her a bit after he wheeled away to realize he meant her! They spent a lot of time together over the week, even holding hands, which did not go unnoticed by the other campers. However, Ben and Aleka consider the time they spent at an archery tournament at camp to be their first date. After Aleka returned from camp, she said to her mother, “That guy is cute,” referring to Ben.

Aleka and Ben tell a funny story of a pillow that Ben brought to camp that he never got to use because when the van was unloaded it got taken to Aleka’s room. “The whole week, Mom was wondering whose pillow it was,” says Aleka. “At the end of the week, we packed up and Mom was going to leave the pillow, but I contacted Ben, who was picked up earlier, and lo and behold the pillow with the pink case was his and he had wondered where it was all week.” Meggan joked that this was done so that Aleka could see Ben again. The pillow was returned, and they continued dating.

Ben and Aleka were married in 2020 at The Nativity of the Blessed Virgin Mary Parish in Big River on the exact date they met two years earlier. It was also aired live for all Wheelchair Sportscamp attendees to take part. Ben was not Catholic before meeting Aleka, but he decided to join the Church before he would ask her to marry him. Ben said, “Aleka is the biggest inspiration in my life.”

He attended the RCIA program, where he met Father Kevin Louis, pastor of St. Mary’s Parish and a good friend of Aleka. He joined the Catholic Church in 2019. Ben’s dad passed away before Ben ever met Aleka. Ben recalled the day he received his first holy Communion and was confirmed: “My mom attended the service and Father Louis had just finished the blessing. At that moment, my mom’s phone went off and it started playing a song. It was my dad’s favorite song. I think my dad was there confirming I was doing the right thing.” Aleka provides the meaning and purpose for life Ben was looking for.

Faith plays an important part in Aleka’s, and now Ben’s, positive outlook on life. They both rely on and complement each other. Alexa’s Faith is rooted in her family, especially her great-grandmother. Meggan said, “I think I had a special connection with my grandmother, Rosemary, and she had a very strong Faith. I spent a lot of time with her. My mother also was very faithful. We would pray the rosary every night as a family when I was growing up. I remember my mother always telling us that there is nothing that prayer can’t fix. I always think, well, that’s the answer then, every time. The answer is prayer. And whether God was going to grant us a miracle of her [Aleka] healing, an answer that Jason and I wanted, or if not, it was what God wanted, and then I had to be happy with God’s plan.” Aleka added, “Ben and I pray the rosary every day.”

Aleka and Ben have several interests. They enjoy being outside (when the weather cooperates). They like to go for walks and be together to enjoy nature. They both play guitar, and Aleka plays the piano. They especially like to dance together. Ben has an art studio in their home where he paints. Aleka is fond of reading and keeps a diary of her daily activities. They are a couple in love. They are a couple who enjoys life.

We all have challenges in life we must deal with. Most do not have to cope with the kind of challenges the Louxs face. When asked if they are resentful or blame God for their physical disabilities, it seemed to be a thought they had never considered before. However, in reply, they said, “It is really simple: We are alive. We have been given the gift of life. We thank God for that.”