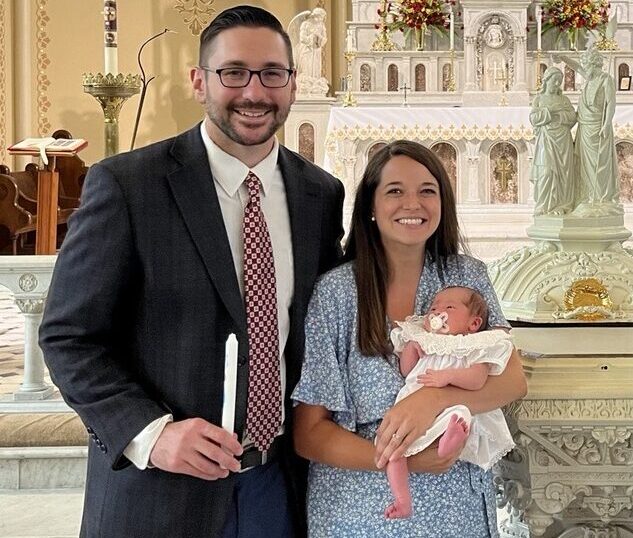 Marcus finds his way when he finds relationship with Christ

Marcus Schoch grew up near Chippewa Falls. He went to Catholic grade and high schools and decided to go to a Catholic college. He has a sincere smile and a soft but deep voice. Now, his mannerisms hearken to the quiet contemplation of the saints. His journey begins in a typical fashion, but what started as a simple decision to transfer colleges ended with a career in evangelization. He is now the area director for the East Coast territory for the Fellowship of Catholic University Students (FOCUS) and is married to Kelsie and the father of their six children.

Marcus went to St. Peter Elementary School in Tilden and then McDonell High School in Chippewa Falls. On the outside, he was doing everything right. He went to Catholic schools, he frequented the sacraments, but something felt off. “I just didn’t have a heart for Jesus, but I wanted to,” said Marcus. “We are so lucky in this diocese to have the wonderful and holy priests that we do, and to have sites like the Shrine of Our Lady of Guadalupe, where we can really dive deeper and grow in our Faith. Those were some deeply formative elements. My family was also close with Father Sam Martin. He’s an amazing priest. Even though I had all those resources and holy people around me, I still felt like something was missing. I knew the facts about why Catholicism was right, but I didn’t feel it. In my heart, I needed to feel that God was good and when I went away to college, it only showed me more of that gap.”

After graduation, Marcus went to a small Catholic college and played football there. It was in college when he really started to follow the secular path. In fact, 80 percent of Catholics lose their Faith in college. “I dove into partying and drinking,” said Marcus. “It was like I was living the parable of the Prodigal Son.

I was living this high life, and it was supposed to make me happy, but the more I got into it, the lonelier and unhappier I became.

I was living this high life, and it was supposed to make me happy, but the more I got into it, the lonelier and unhappier I became. I really was squandering my inheritance, and running away from God. One night, I finally hit rock bottom. I laid awake, unable to sleep because my sin weighed heavy on my heart. I just felt this question keep popping up, ‘What is the purpose of my life?’ I knew that this sin I was living in was not the right way and it would catch up to me. When I realized that, I went to confession the next day. In Romans 6 it says, ‘For the wages of sin is death,’ and when I realized that, it was an immediate weight off my shoulders.”

Though Marcus experienced this dramatic feeling of relief after absolution, it did not mean his problems were solved. “It took months and months of me falling and returning to the sacrament of reconciliation again and again before it became a lifestyle change. One day, I was sitting in the chapel and I had what I can only describe as a ‘come home moment.’ I realized that I continued to fall back into sin not because I was a bad person at my core, but because this was about a relationship. I was not in a relationship with Jesus at that time. I talked to Him, and I prayed to Him, but I didn’t listen to Him.” Marcus kept trying, but continued to fail. He finally persevered and realized he was not going to succeed in his current environment.

After just one semester, Marcus transferred to another school and left the football field behind. “I’ve never looked back. Benedictine University changed the entire trajectory of my life.” Even after transferring schools, temptations were still there. He looked around and saw how his new friends, many of whom were not following Christ, were deeply unhappy. Determined not to repeat the pattern, he joined a FOCUS Bible study and started going to daily Mass. It was here where he would finally enter deeper into his relationship with God that he was so desperately seeking. It was here where Marcus would connect with Kelsie, who was one year younger and, coincidentally, went to the same high school.

Kelsie and he started dating during his sophomore year of college. The two were able to grow in their Faith together. They had the privilege of going on a pilgrimage to Italy and this cemented Marcus’ reversion. “Seeing all the martyrs, and especially Assisi, was so powerful. You walk where the saints walked and you can almost feel their presence with you. It made it all real for me. I felt so inspired to be a part of this story and inspired to pursue holiness like they did.” The two continued to discern marriage and when they were on another pilgrimage to Fatima, Marcus asked Kelsie to marry him.

The pair graduated from Benedictine in 2011 and immediately became FOCUS missionaries. Six children later, Kelsie is a wonderful, full-time mother. Marcus began as a missionary, but after a few stops, he is now an area director. “You know, hope can be found anywhere and it all comes down to this—having hope for your life. I got involved with FOCUS as a student in Bible studies, but now it’s my job to help spread the good news to others. If I can prevent even one student from falling down the path I did, it will all have been worth it.”