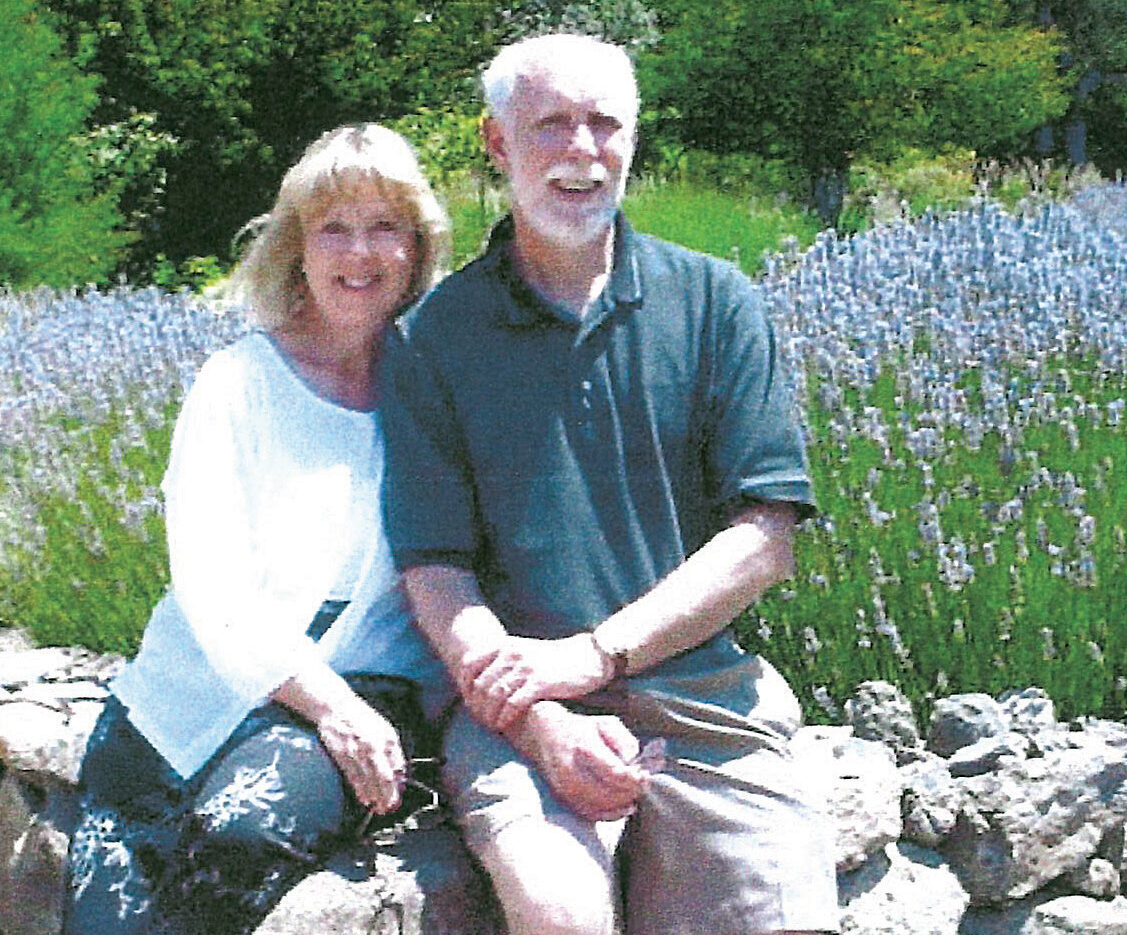 The Nolls create a legacy of teaching and learning

For teachers Paula and Allen Noll of St. Joseph Parish in Menomonie, nothing, not even sickness or the grief of loss, could keep them from fulfilling their God-given vocation to educate. They took on the task, often together, to live out their teaching legacy through all the opportunities life brought their way. On May 12, 2020, Allen Noll’s earthly life ended after several years battling Alzheimer’s disease. Although his death leaves an enormous hole in his family and community, it was certainly not the end of all he had to impart. His lessons and accomplishments live on through his wife, daughters, grandchildren, the rest of his family and all those he worked with and served through his life.

Paula and Allen both grew up in Racine, in faithful Catholic families. They attended their parish schools. Paula participated in the choir and Allen as a server. Paula shares, “When I think back today, and having been a teacher, I think our lives were just so rich in so many ways. We had that typical family in the ’50s that was just full of love and joy. Yes, we had our heartbreaks; it wasn’t always easy, but I think of kids now having to struggle.”

Paula and Allen did not meet until after finishing their parochial education and heading to the public high school, where they had English and social studies classes together their sophomore year. When they were assigned to attend a showing of the newly released movie “Romeo and Juliet” for English class, Allen took the opportunity to ask Paula to accompany him, along with a group of other couples. They had a great time together and soon after began dating. Allen gave Paula his class ring to signify “going steady” and they enjoyed their high school years as a couple.

Both Allen and Paula were very serious about starting their post-secondary education. Paula’s mom would always tell her, “A woman’s education is her life insurance policy.” This is advice she took to heart and has served her well. Allen registered at UW-Parkside in Racine, while, following in her family’s footsteps, Paula went to UW-Stout in Menomonie. The distance was difficult for the couple and they separated until their second year, when Allen transferred to Stout. There they continued their relationship and were active at the local Newman Center, participating in the newly available liturgical ministries for laity. The summer before their senior year, Allen and Paula were married. They finished out their education and then made a cross-country move to Great Mills, Md., where Allen worked in the high school. Paula became a first-grade teacher after Allen’s friend and mentor encouraged her.

It was so sad to see someone so brilliant change so much, but I always prayed for him to find peace.” – Paula

Great Mills was a bit of a culture shock for the Nolls. Their new hometown in rural Chesapeake Bay was home to people who raised hogs, farmed oysters or were crab fishermen. Their eyes were opened at Mass to a very different kind of music. “It was more Gospel-oriented,” Paula shares. “The walls would shake when they sang.” They enjoyed the experience of seeing how other Catholics celebrated the liturgy and how people lived in a different part of the country.

After three years, the couple decided to make the move back to Menomonie, where Allen was to start graduate school. There, they had three daughters: Aimee, Jodi and Rachel. All three are married and, between them, have shared with their parents the joy of 10 beloved grandchildren.

As their young family grew, Paula spent some years at home. But when her daughters were all in school, she spent many decades more in the classroom, teaching mostly kindergarten, as well as eight years of CCD at their parish. Allen spent most of his career as a staff member in the Vocational Rehabilitation Department at UW-Stout, where he taught, supervised students, wrote articles and participated in the writing of textbooks for education in the field of special education. Allen coached the girls’ sports and was committed to attend all of their events. He served on many boards and committees in his professional and volunteer pursuits. Allen also became a “Big Brother” to Logan, one of Paula’s beloved kindergarten students whose father was not a part of his life and whose mother died of cancer when he was just 3 1/2. Allen became a part of Logan’s life and encouraged him in all of his scholastic, musical and athletic endeavors and finally cheered him on as he graduated from Notre Dame and began his career.

As years passed and Allen became the director of the transition partnership between the Menomonie Public Schools and Stout Vocational Rehabilitation Institute, Paula watched him pour the efforts of his heart into the meticulous paperwork of his job. She began to notice little signs that something was changing. His once-neat office became disorganized piles and he would sometimes struggle to remember details or pay invoices. What once seemed so easy for him started to look laborious. She spoke with Allen about her observations and together they mentioned it to their doctor and requested neurological testing. For two years, even after several more episodes, the doctor continued to brush off their concerns as the natural process of aging. Finally, after a trip to the grocery store where Allen had a short episode of not recognizing his wife, the couple insisted on the testing.

After an MRI and a PET scan, Allen was given the difficult diagnosis of Alzheimer’s. The couple cried together there in the hospital room, but when they caught their breath, Allen was quick to ask about the possibility of being involved in clinical studies. Both Allen and his doctor did their research and found a study at Mayo Clinic in Rochester, Minn. It was a big commitment with monthly trips to Rochester. Paula and Allen were both a part of the study. But the Nolls were willing to accept the adventure, because, as Allen said in the midst of his health struggles, “I’m still going to teach. People are still going to learn from me.” The studies continued for three and a half years, at which time it ended abruptly, leaving the couple scrambling for support through the progression of the illness, which had been a big benefit of the study from the beginning.

The couple was very realistic and overall prepared for the progression of the disease, as they had watched Paula’s mother care for her father and aunt when they battled Alzheimer’s. On the home front, there were many changes. The Nolls sold their large home where they had raised their family and bought a smaller home very near a nursing home. Once an avid and award-winning sportsman, Allen packed up his guns and fly-tying gear and found new homes for them when he was unable to take part in those activities he loved. Allen was very outspoken and transparent about what he was going through and had a good sense of humor about his shortcomings as his disease progressed. He didn’t stigmatize it and instead helped those around him understand it. Allen’s daughters, in particular, were in awe of how their dad handled his situation, admitting to them when he couldn’t tackle projects or tasks that once came so easily.

After many years of full-time care-giving, the day came when Paula and her girls finally had to make the difficult decision to move Allen into the assisted living facility. “His physical needs were more than I could do by myself,” Paula shared. “He was not recognizing me on a regular basis, and he was not sleeping and wandered the house during the night.” While Allen resided at the nursing home near their home, Paula and their dog made the three-block daily walks to be with him—to play cribbage, watch TV, talk, listen, pet the dog and just hold hands. “It was so sad to see someone so brilliant change so much,” Paula said, “but I always prayed for him to find peace. I knew he wasn’t at peace, but when it was his time, I knew he was ready to go. He’s home now. He’s where we all want to be.” And Paula and her family are confident that Allen’s lessons live on through all those he’s touched along the way.

Around the same time Paula lost Allen, two dear friends—Sandy and Irma Jean—also lost their husbands. The two have been invaluable support to Paula. “We have been going through this together,” she said. “We understand the deep, sad feeling one gets when you lose a spouse. We can listen, share tears and eventually lift each other up during those odd moments of despair. Grief doesn’t end, it just softens a bit.”

These days, Paula finds time for her passion: gardening. She also has taken up quilting and is a part of two local quilt guilds. She takes part in and volunteers for many parish events and activities throughout the year, substitute teaches for the parish school and is one of the chairs of the living rosary, which she credits to her mother. “My mother was faithful to the rosary. If Mom was saying her rosary, we knew never to bother her, so I knew how special it was to her. And as I got older, I started praying the rosary as a part of my morning meditation. It just sets my day. For me, the rosary is my go-to if ever I’m confused or frustrated.”

In February 2021, as Paula was coming up on the first anniversary of Allen’s death, she shared: “My grief had so far been manageable, but I was getting to a point where I was just sad.” It became difficult for her to take up even her favorite hobbies, and while she continued saying her prayers, they began to feel hollow. “I was at a dark place at that point,” she admitted, “but God knew just what I needed and he sent me a very special request. ‘Would I be willing to take on the role of “substitute principal” at the school for a few months while their principal was out on maternity leave?’” She could think of plenty of reasons not to, and called her daughters and mother-in-law saying, “You’ve got to talk me out of this.” But instead, they told her to go for it! So, she did. She answered the call. “And it was the best thing I ever did. It was the most wonderful experience,” Paula beamed. Her time in the school interacting with all of the kids and teachers and families was “a gift” that got her through a very difficult time.

While life continues to roll on for Paula, facing new challenges and transitions, she is surrounded by the love of her family, her parish, close friends and the memories of her beloved husband who even unto death had lessons to impart. Paula too continues her role as teacher in many ways through her community and parish involvement. For it is often said, “Once a teacher, always a teacher.” For the Nolls, this couldn’t have been more true!

Related Items:Featured
Share
Tweet
Share
Share
Email
The Beauty of Love: Lessons Learned from My Dying Mother
A Sacrament of Healing: Anointing of the Sick and the Preparation for the Journey Home
To Top