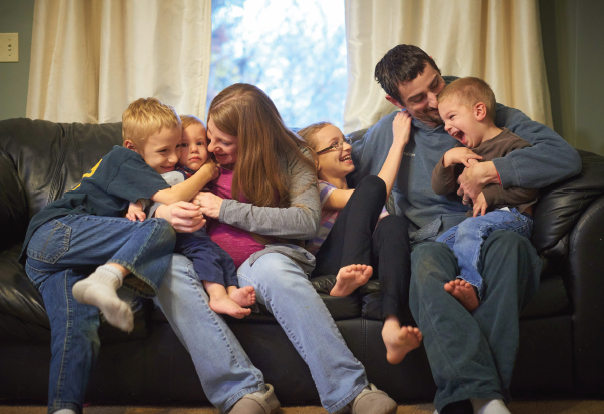 God was part of the Freyblers’ life, but attending Mass was missing from the young family’s world.

“Going to church was something we had talked about on and off over the years,” says Stephanie Freybler. “I was raised kind of Catholic. I was baptized and had my first Communion. I always felt the connection to the faith even when I wasn’t practicing.”

Her husband, Jordan, was raised Lutheran. Their three children at the time, Adeline, Jackson and Benjamin, had not been baptized.

“We saw baptism as making a promise,” Stephanie says. “We weren’t willing to break a promise to God.”

Still, there was a definite pull to put Christ in the center of their life. “We had always talked about God and we prayed before meals even before we started attending Mass. One week we said, ‘We should go to Mass this Sunday,’” Stephanie says. “We went to St. James the Less in La Crosse.”

The connection was made and the Freyblers immediately felt at home in the parish. The children never questioned the change in the family’s Sunday routine.

“I think they felt how Mass connected our family,” says Stephanie.

After coming to Mass every week for a couple of months, the family was ready to take the next step. It wasn’t enough to be in the pew, the Freyblers wanted to be part of the St. James the Less family.

“We did a one-on-one RCIA with Father Schaller,” Stephanie says. “It was a real blessing.”

Although the RCIA process normally takes about six months, with candidates coming into the parish at the Easter Vigil, the Freyblers’ intense study with Father Schaller got them through the process more quickly. 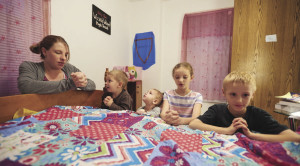 In November 2013, the three children were baptized. Stephanie and Jordan, along with Adeline, who was 7, celebrated the sacraments. “We had quite a few sacraments going on that day,” says Stephanie.

Jackson, now 7, will celebrate reconciliation this school year, and make his first Communion next year. When Theodore was born in November 2014, he was baptized right away, as was the latest addition to the family born in early November.

There was a noticeable change once the Freyblers were officially part of the Church and participating in the sacraments. “In our family, there is a closeness and more peace,” Stephanie says. “It’s nice to have the connection as to why things happen and where things come from. It’s comforting to have faith. There are a lot of younger families that belong to our parish. We’ve made quite a few wonderful friends. St. James the Less is a great family parish.”

Joining the Church has been a tangible reminder that God is always with their family. The sense of belonging and being loved is both an earthly feeling through their parish, as well as a direct connection with God.

“Every night we pray as a family before the kids go to bed,” says Stephanie. “We always incorporate the guardian angel prayer. It really helps the kids feel safe at night. It’s a reminder that they are not alone.”

The Church provides guidance and support for Stephanie and Jordan, too. As a busy stay-at-home mom, Stephanie looks to Mary.

“During good times and bad times, I turn to the Blessed Mother for inspiration,” she says. “Her life puts things in perspective for me. What Mary dealt with as Jesus’ mother is so much more than I deal with as a mother. Her faith and her willingness to trust God are an inspiration. Mary’s example is something that I strive for, and a good reminder of how trivial the things we go through on a daily basis truly are.”

Sharing their new faith has strengthened Jordan and Stephanie’s marriage. Before coming into the Church, the couple had been married for eight years. Joining the Church has given them a platform for discussion and understanding, with each other and with their children.

“We often do have conversations about different things with our faith. One of the cool things about coming into the Church, sometimes the kids come up with these questions and we talk about it with them as well as with ourselves,” says Stephanie. “Going to Mass together helps us to connect even if we are watching the kids or doing other things. We always go as an entire family. It’s a journey together. Often I feel so grateful that we both felt the call at the same time. We haven’t had any disagreements about how we want to carry out the faith in our home.”

The busy life Jordan and Stephanie have with their family and Jordan’s career do not leave them with an abundance of time to spend alone. Despite the limited time they have as a couple, they work hard to make Christ the center of their marriage, and use their faith as a connection to each other.

Learning the history and theology of the Catholic faith is interesting to the couple. Catholic tradition is something Jordan and Stephanie have enjoyed exploring together.

“Discovering the Latin Mass has been a beautiful thing for us,” Stephanie says. “Una Voce La Crosse put on a special event, which was a date night for Jordan and me. We have attended the Latin Mass at Our Lady of Guadalupe Shrine as a family, too.”

The Freyblers focus on keeping daily life simple in a world that emphasizes acquiring things and de-emphasizes the importance of family. It was how the family lived before converting to the faith, and finding other young families with the same focus has been a blessing.

“We didn’t get our children everything they wanted and then stop when we joined the Church,” Stephanie says. “The biggest obstacle with the secular world is for the kids because they see other kids who do get everything. Still, our kids don’t even ask for that stuff because they realize there are more important things in life. The kids are very understanding. It does help that we are able to talk about the blessings in our life. When they look at the big picture of the world they see we have what we really need.”

Stephanie appreciates how it isn’t necessary for her to guide their children to spend time together. The four kids prefer playing with each other to doing their own things.

“It’s so neat to watch the kids interact because they want to play together,” she says. “We do have things so easy. It’s wonderful how the faith has impacted our family.”