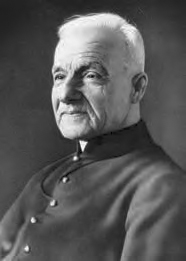 St. André was born Alfred Bessette in Quebec in 1845. Orphaned by the age of 12, he was a sickly child. He entered the Holy Cross Brothers, but, even at the age of 25, he could not read and write. Although he was almost sent away, the bishop permitted him to stay and receive his vows. He was sent to Notre Dame College in Montreal after he took his vows to act as messenger and doorkeeper. He stayed in this post for 40 years, ministering to the sick.

St. André is known for praying with the sick who came to him, through the intercession of St. Joseph. Many credit their healing to the prayers of St. André. His great devotion to St. Joseph inspired him to build a chapel to his honor on Mt. Royal in Montreal. Although the chapel, known as St. Joseph’s oratory, grew slowly, pilgrims flocked to it and many were cured. The walls there are lined with crutches.

St. André is buried in the oratory, although he did not live to see it completed. His love for St. Joseph, his dedication and perseverance in humble acts and his unwavering trust in God led Pope Benedict XVI to say, at his canonization, that St. André “lived the beatitude of the pure of heart.”

By the numbers:
80,000 – Number of letters St. André received each year

2010 – Year he was canonized by Pope Benedict XVI

2 million Number of pilgrims who visit the oratory every year