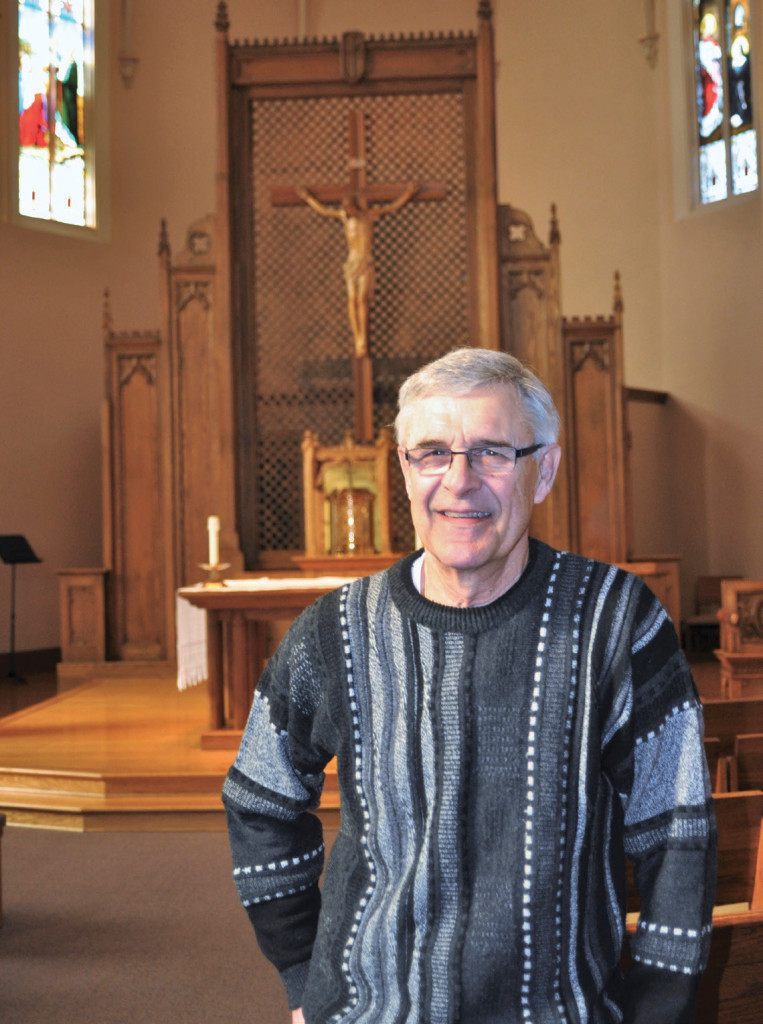 MIKE HARRIS ATTENDS MASS DAILY AT ST. PATRICK PARISH IN SPARTA, he leads the rosary every Thursday, he teaches CCD and helps teach RCIA and he is a walking encyclopedia of Catholic information. His devotion is so palpable that it could only come from what must be a lifetime of practice. You wouldn’t know it, but, at age 72, Mike has only been a Catholic for 12 years.

Mike grew up in Rothschild and lived without religion. It wasn’t until he married Jayne that he set foot in a Catholic Church as a believer.

“I didn’t grow up with any religious upbringing,” Mike shared. “My parents were good people, and my mother did try, but they were tavern owners and I grew up in that environment.”

Later on in life, he began to try a few different churches, but none grasped him quite like the Catholic Church. He realized he loved the ceremony and worship of the Episcopal Church, but when he moved to Sparta, he decided to attend the Catholic service with his wife.

“My wife introduced me to Catholicism and I was hooked. I was just in awe of the fullness of this Church,” he said. “When I came here, I really felt the difference. There was something missing before and I finally found it.”

When he decided to become Catholic, he jumped in with both feet and an open heart and was not afraid to ask questions.

“The trouble with me is, when I set my mind to something, I don’t stop, I want to know everything – and that’s what I did when I went through RCIA. I can’t read enough of it or talk about it too much,” he said.

He said his conversion moment didn’t happen in a spectacular flash of light or at a low point in his life, but his dedication to the Church happened in little steps and small gestures.

For him, it was someone asking him to lead the rosary, and now he misses it if he doesn’t do it once a week.

“That’s how you do it. That’s the evangelization part. Get people involved here and there in little things around the parish and pretty soon it just grows like the mustard seed.”

Another “little step” for Mike was deciding to teach CCD. He has taught seventh- and eighth-graders and he encourages the kids to talk about the faith.

“I love it when a student can ask me a question I don’t know an answer to. I do know a lot, but I always say, “Well, I don’t know the answer yet, but I’ll get back to you.’ And then I do. It’s important to answer those questions.”

Now Mike is helping with the RCIA class and he loves being able to help new converts. He says it can actually help lifelong Catholics to be around those who are newer to the faith.

“I think converts are the worst kind of Catholic, because they’re always telling Catholics what they believe,” he jokes. “But really, you can’t know the answer to everything; the word ‘mystery’ is there for a reason and that’s where faith comes from.”

Mike’s advice to those considering conversion is to do as Nike says and “Just do it.”

“I say just do it and don’t be afraid of it. If it weren’t for going with my wife and the help of so many others at St. Patrick’s, it could have gotten overwhelming fast,” he said. “Then I realized what the Church actually is, it’s a living, breathing thing and it just fills you up.”