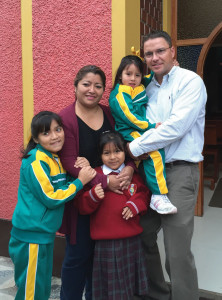 PROVIDENCE. That was the word that Jack Felsheim used to describe the chance meeting we had that eventually led to me joining nine other diocesan members on a pilgrimage to Peru to follow in the footsteps of Father Joseph Walijewski.

In January of 2015, I was traveling to Phoenix for business. While waiting at my gate in the La Crosse Airport, I noticed two men conversing about a book on Pope Francis. At that time, I was somewhat of a newly minted Catholic, having been confirmed, baptized and received my first Eucharist the Easter prior (joining my wife and three daughters in the faith). One of the gentlemen looked familiar to me, but I couldn’t quite place the name with the face. With the help of my smartphone and Google, I determined that one of the gentlemen was none other than our bishop, William Callahan. Excited for the opportunity to meet the bishop, I introduced myself.

As it turns out, Bishop Callahan and Jack were traveling to Lima, Peru, to conduct some work for the cause of Father Joe. Having spent three years in Latin America, I offered to them that if I could be of service, I would be happy to help. Before they left, they invited me to pray and reflect to understand God’s intentions for me to get involved.

I was somewhat familiar with Casa Hogar due to the connection between St. Patrick’s Elementary and Jhon, one of the orphans there. As I learned more about the good work that Father Joe had done, and which continues today under Monsignor Hirsch, I made the decision to participate in the pilgrimage in August of 2015.

To say the experience was life-changing would be a significant understatement. Casa Hogar receives 64 children from the area, who are divided among eight families, each with its own parent-teacher couple who act as a surrogate family for the children, who range from infancy to 17 years old. They have an organized development program, modeled after Boys Town, which greatly influenced Father Joe in his youth and became the basis of his desire to help the impoverished to have at least a chance of living a better life than their biological families could provide. 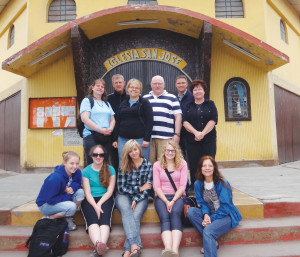 The most powerful experiences for me were the times spent with the families at Casa Hogar, knowing that the spirit of Father Joe permeated the facility and the determination of his ambition was visible all around.

The children at Casa are happy knowing that they are loved. Monsignor Hirsch is the rock of the orphanage and brings a zest for life while he patiently cares for his flock, both at Casa and around the area.

It was indeed Providence that led Father Joe to be ordained in the La Crosse Diocese, move to South America and to establish the safe places where the poor and desperate can find hope and faith. I believe that it also called me to Lurin, Peru, last year. And by God’s continued Providence, and the support of our Catholic family, the good work there will continue.