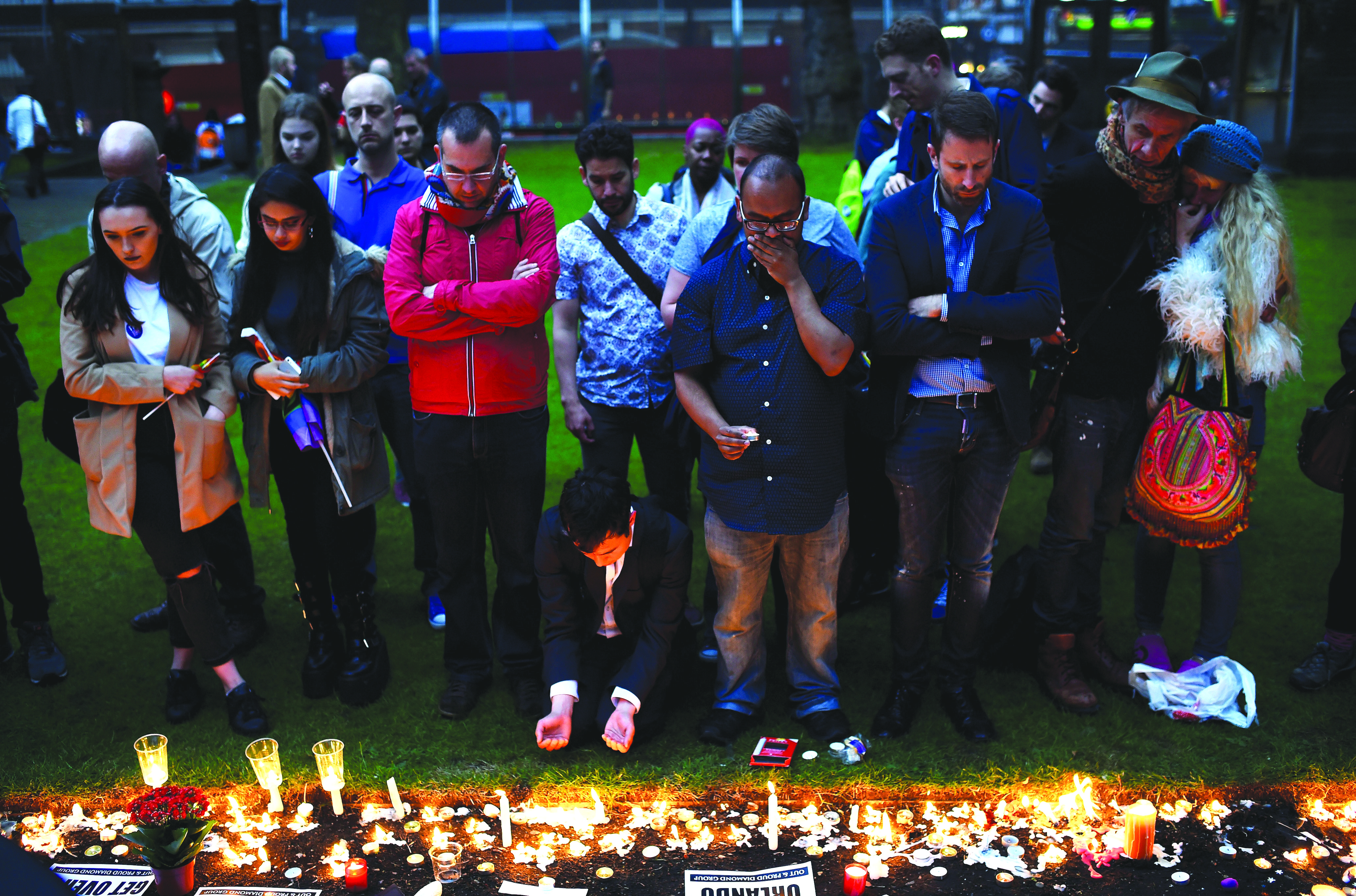 A headline in the local paper read, “Make It Stop.” That phrase sums up the feeling of helplessness that Americans feel at the latest terror rampage that took place in Orlando on June 12. In the early morning hours of June 12, a gunman entered a nightclub in Orlando and opened fire, killing 49 people as of this writing, and injuring more than 50.

Pope Francis joined bishops and clergy across the U.S. in condemning this attack on innocent civilians, calling the violence an act of “senseless hatred.” A statement from the Vatican read:

The terrible massacre that has taken place in Orlando, with its dreadfully high number of innocent victims, has caused in Pope Francis, and in all of us, the deepest feelings of horror and condemnation, of pain and turmoil before this new manifestation of homicidal folly and senseless hatred. Pope Francis joins the families of the victims and all of the injured in prayer and in compassion. Sharing in their indescribable suffering he entrusts them to the Lord so they may find comfort. We all hope that ways may be found, as soon as possible, to effectively identify and contrast the causes of such terrible and absurd violence which so deeply upsets the desire for peace of the American people and of the whole of humanity.

Bishops throughout the country expressed their condolences and offered prayers of healing for the victims, their families, the community and the country. Archbishop Joseph E. Kurtz of Louisville, president of the United States Conference of Catholic Bishops, issued this statement:

Waking up to the unspeakable violence in Orlando reminds us of how precious human life is. Our prayers are with the victims, their families and all those affected by this terrible act. The merciful love of Christ calls us to solidarity with the suffering and to ever greater resolve in protecting the life and dignity of every person.

On Sunday, June 12, Bishop John Noonan of the Diocese of Orlando, offered the statement below. The diocese held an ecumenical prayer service on Monday, June 13 at St. James Cathedral in downtown Orlando.

A sword has pierced the heart of our city. Since learning of the tragedy this morning, I have urged all to pray for the victims, the families and first responders. I pray that the Lord’s mercy will be upon us during this time of sadness, shock and confusion. I urge people of faith to turn their hearts and souls to the great physician, our Lord Jesus Christ, who consoles and carries us through suffering with mercy and tenderness. The healing power of Jesus goes beyond our physical wounds but touches every level of our humanity: physical, emotional, social, spiritual. Jesus calls us to remain fervent in our protection of life and human dignity and to pray unceasingly for peace in our world.

Priests, deacons and counselors from the Diocese of Orlando and Catholic Charities of Central Florida are serving at the Aid Center established by the City of Orlando. They are on site helping victims and families on the front lines of this tragedy. Throughout the day, they are offering God’s love and mercy to those who are facing unimaginable sorrow. They will remain vigilant and responsive to the needs of our hurting brothers and sisters.

I have asked all of our parishes to include prayer intentions during the celebration of Sunday Mass today where close to 400,000 registered Catholics participate in nine counties of Central Florida. At our 91 parishes and missions, today’s prayers have been offered for victims of violence and acts of terror…for their families and friends…and all those affected by such acts against God’s love. We pray for the people of the city of Orlando that God’s mercy and love will be upon us as we seek healing and consolation.

Cardinal Seán O’Malley, archbishop of Boston, issued a statement that read, in part:

“As our society faces the massive and violent assault on human life in Orlando on Sunday, the Archdiocese of Boston offers and encourages prayers on behalf of those who were killed in the attack, those who were injured, and all their families and friends. At this time our prayers are also with Bishop Noonan and the Diocese of Orlando, with the wider community of Orlando, and for our country, once again confronted by the face of hatred expressed through gun violence.”

Cardinal O’Malley went on to say:

“The United States proudly upholds its long-standing tradition of being open and welcoming to those in need of a safe haven. Our country greatly benefits from human creativity and achievement cultivated without distinction of race, ethnicity, religion, nationality or any other differentiating characteristic. From a multitude of differences we have sought unity. We must meet the challenges of combining freedom, pluralism and unity in our increasingly diverse society if the United States is to continue to be a beacon of hope to the world.

Achieving the unity which promotes peaceful coexistence means addressing those deeper forces which threaten our well-being. In all aspects of our lives, including our government, the private sector, our faith communities and our schools, we must be aware of and reflect on how we think and speak about those who are different from us. And we cannot allow ourselves to be defeated by the worst instincts in human nature, by efforts to divide us based on our differences or by an immobilizing fear.”