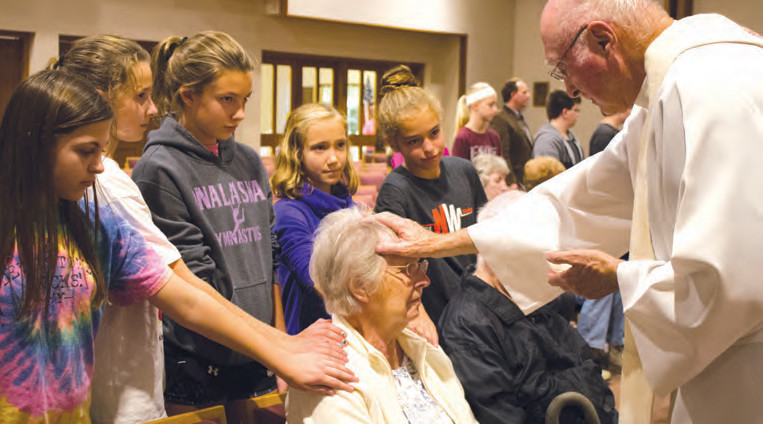 The 7th graders at St. Elizabeth Ann Parish in Holmen host Anointing of the Sick service

This Jubilee Year of Mercy has been a wonderful opportunity for God to work through us in new and fulfilling ways that maybe we haven’t tried before, but it has also been a chance to celebrate and recognize the works of mercy we already practice.

The 7th grade faith formation class at St. Elizabeth Ann Seton in Holmen is doing just that as they host an Anointing of the Sick prayer service and welcome gathering again this year for the ill and elderly parishioners in the community. They have held the event every year since the parish’s founding in 1985 and it has only gotten stronger.

Pat Brueggen, Faith formation director and youth director at St. Elizabeth Ann Seton, said the service fits right in with the 7th graders’ faith formation lessons where they learn even more about the sacraments and especially anointing of the sick.

“I think anointing of the sick is the one that’s most misunderstood sacraments, so to have the 7th graders be the organizers of an event like this makes it even more real for them,” he said. “We prepare them by talking about the anointing about 2 weeks prior, and the week before, the kids are given the names of the elderly within the parish and then they invite them to come up for the evening. They’re really hands on throughout the whole thing.”

Pat said every year they do phone calls to anyone who is 68 years and older and along with the kids, they go through the list of people and highlight anyone who may be in need of the sacrament.

When the event starts, the kids are ready and waiting at the entrance to greet the parishioners at the door and offer to help them to their seats.

Pat said it’s a great bonding moment for the younger and the older parishioners to get to know each other and both sides are greatly affected by the relationship.

“The older parishioners absolutely love it and the program gets many, many thank you’s. The interaction between the young and the old is a powerful healer,” he said. “The kids are always awesome and they still talk about it years later.”

Pat said it even gets parents involved because they will offer to help drive people in who don’t have the means to get here. The kids also bring in food but then are encouraged to sit amongst the parishioners and learn more about them.

“At each table we have spots and the 7th graders disperse amongst the elderly. We actually give them starter questions like what was your confirmation name or when was the biggest snowfall you can remember, and it just gets some fun conversations going and they love it,” he said.

Pat said he hopes this event continues to grow and wants to take away some of the uneasy feelings some may feel about coming to the event.

“I think there’s a stigma about anointing of the sick, like when we call sometimes they say ‘well I’m not dying,’ so they don’t need it,” he said. “But you don’t have to be dying to be anointed and there’s a lot of illness that don’t automatically mean death like injuries or mental illness, not just physical, and I think having an event like this can really help people to better understand this sacrament and work of mercy.”

Story and photography by Monica Organ