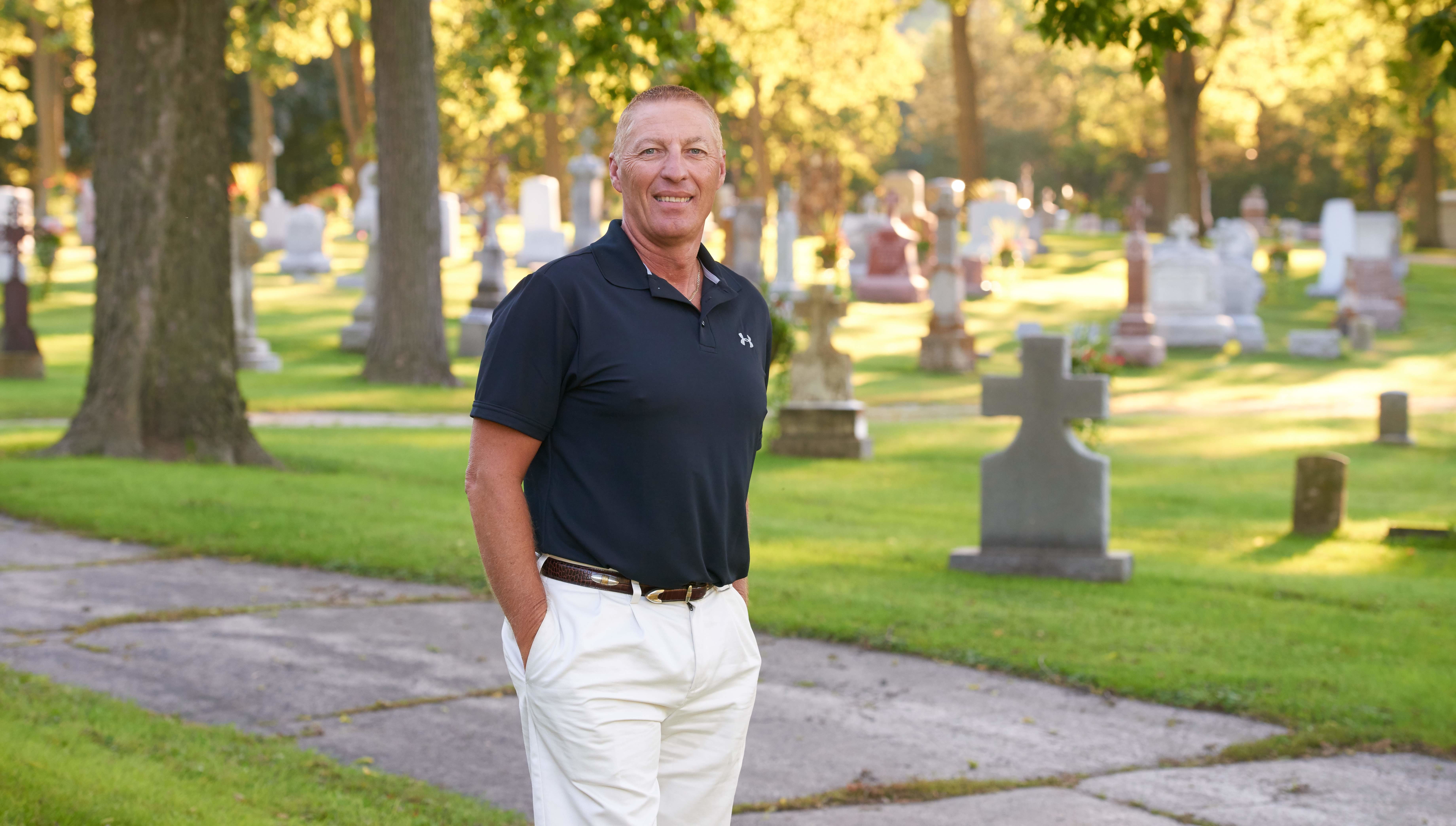 A job that could easily be seen as sad or uncomfortable or even scary, Jeff takes on as an act of love. He knows that with every family helped and every blade of grass cut, he and his team are working through the greater love of God.

“The work of mercy of praying for the living and the dead, a lot of times, is for the survivors as much as it is for the person who has passed away,” he said. “And as part of that, we take care of the cemeteries for the people buried here, but also for their family members, who can leave knowing their loved one is being taken care of and respected.” 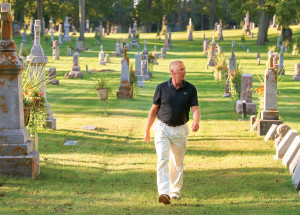 Jeff takes his job personally, especially since he has been connected to Catholic cemeteries in the diocese all his life.

“I have worked for Catholic cemeteries for the last 39 years and have run it as director for the last 22 years. I grew up with it, and my dad was actually the superintendent here before me; he worked here for 43 years. When he retired, I took over as superintendent, and I absolutely love what I do,” he said. “I actually grew up in the house on the cemetery land on Losey Boulevard here in La Crosse, and my kids grew up here, too.”

He remembers as a kid how it was a little hard for some of his friends to get past their fears and come over to his house.

“I used to have friends come over and I’d say we were going to camp in the front yard. They would be too scared and say, ‘Sleep in a cemetery, no way!’, he shared. “But eventually, they got used to it. It was just normal for me and I’ve always been comfortable around death and funerals.”

Because he grew up in the Catholic Church and has been around death all his life, he lives his life knowing that God has a plan for everyone.

“I’m definitely not disconnected with the death part; I understand it wholeheartedly, “he said. “I’ve lived my whole life knowing that I could walk out the door and God could take me any time, and I’m all right with that because that means he’s got a better plan for me. There’s a reason that everyone dies, and I believe that.”

With his years of working with families in every kind of situation, Jeff said he wants them to see him as a steady resource they can turn to.

“When I’m working with a family, I’m very respectful and I can grieve and cry with them, and I have. I have done it for so long and I know families need that sturdy person to rely on in that moment,” he said. “If you’re not respectful to them, you’re not being respectful to the one who is buried here.”

Part of what Jeff does on a daily basis is help families arrange a burial of a loved one or to set up pre-need arrangements, which is something he highly recommends when possible.

“I’m noticing more families are doing pre-need arrangements so they’re not leaving their family members to make the decisions for them. It happens all the time where they make an appointment after talking to their kids and it’s just peace of mind for both sides,” he said. “It’s one of the last things for families to worry about after a death and then the family knows for sure that this is what their loved one really wanted.”

Making burial arrangements are solemn occasions after a death, but Jeff finds that when making pre-need arrangements, the atmosphere can be lighter and the process has less pressure.

“I love to help the families, that’s why I like my job so much, and I want to make this difficult time as easy as possible, but when they’re in here pre-need, we can laugh and be more at ease. You can have laughter at the right period of time,” he said. “But a lot of times when arrangements are made after a death, a loved one will sit across from me at my desk and they’ll look like they’re listening, but they’re staring right through me. In those cases, you really have to be careful; often they come back later and don’t remember details because there is, and understandably so, a lot more on their minds.”

In addition to helping families make burial arrangements, Jeff works to serve the families and their loved ones by keeping the cemetery grounds pristine and well-kept, which he feels is a big part of his calling to share the mercy of God.

“That’s one of my pride and joys; I want the cemeteries to look as good as anyone’s yard. You want it to be welcoming to anyone coming in, especially to the families. You need to be able to have a place for them to come and to want to come,” he said. “I’ve been at ones that are not well taken care of. There are parish cemeteries that just don’t have the money to even cut the grass continually, and that’s what I do as director; I try to help these underfunded cemeteries find the means to take care of the cemeteries as they deserve to be.”

Jeff is always willing to lend an ear to anyone who needs to talk, and he encourages his employees to do the same.

“Part of helping people through the process when someone does pass away is that you have to be here for them and you have to be a great listener. Someone may come in here and tell you the same story weeks, months or even years after they’re gone, but they need to do that, that’s their grieving process, so I happily listen to it because it helps them,” he said. “I’ve even been told to watch over people as they come to visit a grave because maybe he’s struggling or may be suicidal, so I definitely take that personally and I take on that responsibility. I try to greet people, and I ask my employees to interact with them and encourage them to take a couple minutes to help them.”

Jeff knows that visiting a cemetery is not something that everyone wants to do or even can bring themselves to do, but he wants them to be assured that there is no judgement if the last visit to the cemetery was at the funeral. 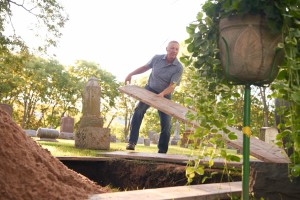 “I really want to take away some of the stigma around cemeteries and I don’t want people to feel guilty for not visiting for long periods of time,” he said. “You can pray for them in church, you don’t need to go to the cemetery, so I never fault anyone who can’t remember where their family is located and I am happy to show them.”

Catholic cemeteries are more than plots and headstones; they are consecrated, holy grounds that respect the teachings of the Catholic faith about death and resurrection. Jeff believes and encourages others to consider that choosing a Catholic burial means allowing God to care for you in death as He did in life.

Why a Catholic burial?
The Church encourages the burial of Catholics in a Catholic cemetery because it is a long-standing sign of the Church’s reverence for the human body. Appropriately, the ground in a Catholic cemetery is consecrated to receive sacred remains. Burial in a Catholic cemetery, or even in a cemetery where the plot has been consecrated, recognizes baptismal commitment and gives witness, even in death, to our belief in the resurrection.
Whether buried or placed in a mausoleum, being laid to rest in a Catholic cemetery allows you, as in life, to be surrounded by a community of Catholics, awaiting the day when God will raise their mortal bodies to glory.
Cremations
There are many misconceptions about cremation in the Catholic faith. While burial of the body is still preferred, in that it more fully witnesses to our belief in the final resurrection, cremation is now an option. However, when choosing cremation over a traditional burial, there are some things to keep in mind. “When the choice has been made to cremate a body, it is recommended that the cremation take place after the Funeral Liturgy,” according to the Order of Christian Funerals, which was approved by the US Bishops Conference in 1997. It is also expected that families are to seek an appropriate final resting place for the remains. Remains are not to be separated, scattered or kept in a family members home, for instance, as the ashes should be given the same respect and treatment as you would for a traditional burial.

Pre-need arrangements
Being able to plan a burial and funeral ahead of time is a blessing not only for those planning, but for their families as well. The decisions made now will be your own. This gives you peace of mind that your wishes will be known and followed, and helps your loved ones have peace of mind later because they will know they are doing what you wanted. A pre-need burial selection may be made calmly and responsibly, and relieves your family of the burden later on.