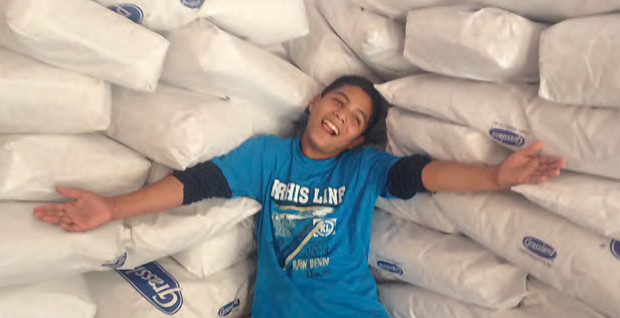 After a robbery, the need for milk is more important than ever

An effort has been under way for more than 30 years to ensure an ongoing supply of milk is available to the orphans of Casa Hogar Juan Pablo II, an orphanage sponsored by the Diocese of La Crosse. Since 1984, the Diocese of La Crosse has supplied more than 500 tons of powdered milk to orphans through Project Milk, a program of the Diocesan Rural Life Committee. It costs about $85 to buy and ship one 50lb bag of powdered milk to Peru. All funds have come from donations within the diocese.

It was only fitting that in the Year of Mercy, Project Milk expanded to help supply powdered milk to not only the orphans at Casa Hogar, but to more than 20 institutions in the Lima area impacting thousands.

However, this rapid growth experienced a rather shocking setback: a robbery of almost half of the 800 bags. According to Executive Director Msgr. Joseph Hirsch, “I spoke with Bishop Carlos about the milk shipment. He said that a group of people with a large truck and apparently some guns came during the night to make the steal. They also stole the tabernacle with all the hosts, but apparently this bothered their conscience and they returned the tabernacle and hosts. So we have at least thieves who believe in God and divine justice.”

Since the time of that devastating loss, much deliberation has resulted in a plan to ensure this will not happen again. “Moving forward, the bishop of Lurin will be more involved in the process and assures us that there is a facility that is safer and more secure. All institutions receiving milk will pick up their portion within two days of arrival,” noted Jordan Zoroufy, development director of Casa Hogar Juan Pablo II. With new and improved security measures in place, plans are under way to send another shipment, which might arrive before Christmas. The current low milk prices, while not good for dairy farmers, make it possible to purchase and ship more milk powder to the orphans – which is desperately needed according to Msgr. Hirsch: “I (was) at a meeting (in September) of diocesan priests in Lurin and have already been asked about the milk because they received very little as a result of the robbery. The needs here are infinite and so any quantity can be effectively utilized.”

To learn how to help put a milk mustache on the face of an orphan or for questions concerning Project Milk, contact Dan Kitzhaber, bishop’s liaison to the Rural Life Committee, at 715.384.4989.