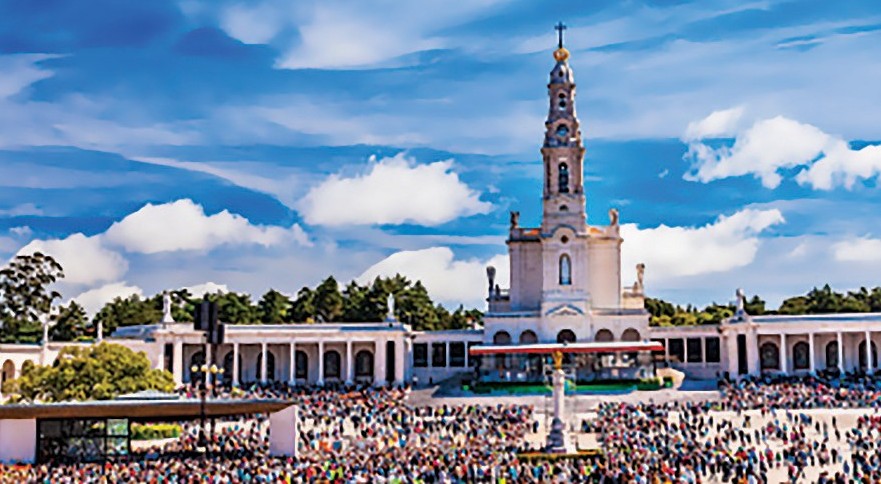 This year marks the 100th anniversary of the appearance of Mary to three young visionaries in the town of Fatima in Portugal. This report is excerpted from Fatima, 100 years of grace by the World Apostolate of Fatima, U.S.A. – Our Lady’s Blue Army. If you would like to read an in-depth account of the miracle, its history and the lives of the children, accompanied by historical photography, visit giftshop.wafusa.org. 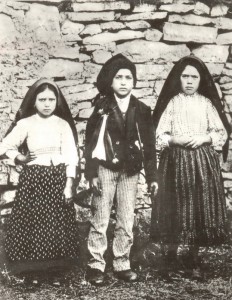 During World War I, Pope Benedict XV made repeated, but forlorn, pleas for peace. Finally, in May 1917, he made a direct appeal to the Blessed Mother to intercede for peace in the world. Just over a week later, Our Lady began to appear at Fatima, Portugal, to three shepherd children: Lucia dos Santos, age 10, and her cousins Francisco and Jacinta Marto, ages 9 and 7. However, it was in the previous year, 1916, that the children had their first supernatural encounters with an Angel as a means of preparing them to receive the Queen of Heaven.

The Angel of Portugal

In the spring of 1916, as the three shepherd children tended their sheep in a property called Old Chousa, a drizzling rain began to fall, so they climbed the hill to find shelter in the crevices of a rock. Suddenly a strong wind began to shake the trees. They looked up and saw coming toward them a dazzlingly beautiful young man, seemingly made of light, who told them, “Do not be afraid. I am the Angel of Peace. Pray with me.”

Kneeling on the ground, he bowed down until his forehead touched the ground and had them repeat three times: “My God, I believe, I adore, I hope and I love you. I ask pardon for those who do not believe, do not adore, do not hope and do not love you.”
Then, rising, he said, “Pray thus. The Hearts of Jesus and Mary are attentive to the voice of your supplications.” Leaving them absorbed in a supernatural atmosphere, the angel disappeared.

The angel appeared to them again later in the summer and in the fall, encouraging them to pray and to make sacrifices for the reparation of sin.

The first apparition of Mary

On May 13, the three children took their flocks out to pasture in the area known as the Cova da Iria. After lunch and the rosary, they suddenly saw a bright flash of light, followed quickly by another flash in the clear blue sky.

They looked up to see, in Lucia’s words, “A lady, clothed in white, brighter than the sun, radiating a light more clear and intense than a crystal cup filled with sparkling water lit by burning sunlight.” She said, “Do not be afraid, I will not harm you. I come from heaven.” She asked them to come to the Cova for six months on the 13th day of the same hour.
She ended the visit by saying, “Say the rosary every day to obtain peace for the world and the end of the war,” and began to rise serenely towards the east until she disappeared.

Mary continued to appear to the children throughout the months, and encouraged the children to pray the rosary for the reparation of sins and the conversion of Communist Russia. As word spread, large crowds gathered to witness and pray.

The children said they had been told a three-part secret. Lucia wrote down the third part of the secret at the order of her bishop, but it was not divulged until 2000, just after the beatification of Jacinta and Francisco. 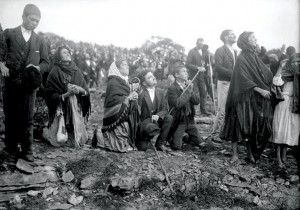 The Miracle of the Sun – during the October apparition

The greatest miracle to occur since the resurrection is also the only miracle ever precisely predicted as to date, time of day and location. It is popularly known as “The Miracle of the Sun” and October 13, 1917 has come to be known as “The Day the Sun Danced.” The miracle was viewed by 70,000 or more people at the Cova that day, and is reported to have been seen from as far as 25 miles away. Doubters and skeptics had become believers. Even the secular newspaper O Seculo’s chief reporter, Avelino de Almeida, who had written satirically before, now reported affirmatively, and stood by his story later on in spite of harsh criticism.

Events at the Shrine of Our Lady of Guadalupe:
May 13: Our Lady of Fatima – Relevant Radio’s Marian Day of Reflection with a procession and May crowning
October 13: The Miracle of the Sun – Candlelight procession