In the history of the modern American civil rights movement, three iconic moments are typically cited.

May 17, 1954: The U.S. Supreme Court hands down its decision in Brown v. Board of Education of Topeka, declaring segregated – “separate but equal” – public schools unconstitutional.

August 28, 1963: Two hundred thousand Americans participate in the March on Washington and hear Martin Luther King, Jr., proclaim his dream of a country in which his children will be judged by the content of their character rather than the color of their skin; ten months later, Congress enacts the 1964 Civil Rights Act.

These were noble moments, worth remembering; I certainly cherish my memories of encounters with Bayard Rustin, who organized the March that made Dr. King a national eminence. Yet I also believe there was a fourth iconic moment in America’s journey from a land fouled by segregation to the most racially egalitarian nation on the planet. The man at the center of that fourth dramatic moment was an American legend whose accomplishments should rank as high as anyone’s in the pantheon of civil rights heroes.

On April 15, 1947, the Brooklyn Dodgers opened their National League season against the Boston Braves at Ebbets Field. The Dodger first baseman that day was Jackie Robinson: the first African-American to play in a major league game since the infamous “color line” was drawn in the 1880s. At UCLA in 1939-41, Robinson was perhaps the greatest amateur athlete in the country, a star in track-and-field, football, and basketball. After service as an Army officer in World War II, he was playing shortstop for the Kansas City Monarchs of the Negro American League when he was signed to a minor league contract by “The Mahatma,” Branch Rickey, a cigar-chomping Methodist and the Dodgers’ general manager. Rickey was determined to break the color line, and he deliberately chose Jack Roosevelt Robinson to do so.

And not because Jackie Robinson was a mild-mannered wallflower. But precisely because he was a warrior who, in the words of Leo Durocher, “didn’t just come to play, he come to shove the [expletive deleted] bat…” (I’ll leave the rest of the quote to your imagination). Robinson was to be a warrior with a difference, however: Rickey, an adept psychologist who believed in the essential fairness of the American people, wanted a man with the courage not to fight back against the racist slurs, beanballs, and spikings that were sure to come his way – except by giving an unforgettable performance on the field.

Which is what Jackie Robinson, the immortal Number 42, delivered. Grainy black-and-white videos today remind us of a truth the baseball world learned seventy years ago this month: there has never been anything more exciting in baseball, including the majestic home run and the overpowering no-hitter, than 42 stealing a base, especially home. Rather than hollering back at bigots during his rookie year, Robinson beat them with a slashing, attacking style of baseball that helped lift the Dodgers to the National League pennant and brought them within one game of a World Series victory over the lordly Yankees (who didn’t sign an African-American player until Elston Howard in 1955).

It was a performance for the ages. And it changed America.

In this entertainment-saturated twenty-first century, it may be hard to recall the grip baseball had on the national emotions and imagination in 1947. But as the late Columbia University cultural historian Jacques Barzun (an immigrant from France) used to say, whoever wants to understand the heart and mind of America had better understand baseball. On April 14, 1947, that nation-defining pastime still embodied the nation’s original sin. The next day, Jackie Robinson began to accelerate a change in America’s heart and mind. That change made possible Brown v. Board of Education, the Civil Rights Act, and the Voting Rights Act.

On the sapphire jubilee of his first game in the majors, America owes 42 an enormous round of applause and a prayer for the repose of a noble soul. 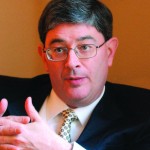 By George Weigel
The Catholic Difference