Sister Sarah Hennessy, of the Franciscan Sisters of Perpetual Adoration in La Crosse, is well versed in the ways of Eucharistic Adoration, but there was a time not so long ago that she didn’t even know what the Eucharist was.

Raised a Quaker, Sr. Sarah was not familiar with the Catholic Church, but a chance meeting with two FSPA sisters in Mexico started her on a path to her calling. 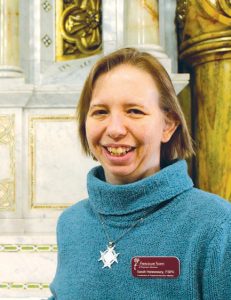 “I didn’t grow up as a Catholic but I met some of our sisters in Mexico. The FSPA has a program called GATE or Global Awareness Through Experience that allows people to go to developing countries to have an immersion and to really understand poverty,” she said. “At the time I met the sisters, I was a Quaker, in college, I even had a boyfriend and everything. But, two days after meeting me, a sister approached me and said ‘Do you think God has a call on your life?” and I said I don’t think I know what that means.”

Sr. Sarah didn’t know what the sister meant but it ignited something in her that she couldn’t shake.

“I wasn’t sure what she meant but when I went to bed that night I felt this fire in my heart and after that I started writing her letters and in my first letter I asked her all these questions about being a sister and I also asked her to explain the Eucharist,” she said. “We didn’t have the Eucharist in Quakerism, but that relationship started a seven year journey of discernment.”

She said discernment is a lot like dating, in that you are constantly looking for that feeling of being home and accepted. As she discerned, she lived with other sisters and went to RCIA and after going through the program, she decided she wasn’t yet ready to enter the Church.

“I returned to a Quaker community and taught at a Quaker school but then I started going to a Spanish Mass and that’s when I finally felt that God was calling me through the Eucharist and Our Lady of Guadalupe, I had a great devotion to her since I had a great connection to Mexico,” she said.

Sr. Sarah entered the Church in 2000 and knew then that she had felt a call to religious life, but she wasn’t sure yet where God would lead her.

“At the time I had checked out maybe five to 10 communities and initially thought I wanted to join a mission congregation and they actually told me ‘we think you need to go to La Crosse one more time,’” she said. “So I went back to La Crosse and I went into the adoration chapel. As I was praying, all of a sudden I just knew I was home and I knew I was with Christ and I was ready to give my whole life to Him. I already knew I was in love with Jesus and in love with the people of God and that was confirmed in the adoration chapel that day.”

“We put adoration into action by our efforts to live in continuous praise and thanksgiving for the wonders God works in us, in our congregation and in the world.”

Discernment and getting your call can be a confusing and sometimes scary time, especially once you recognize the call.

“I left the chapel and called a friend and said ‘am I crazy?’ She said to me ‘No, it sounds like you found your place.’ When you get that sense of clarity, it’s like ‘wow, where did that come from?’” she said. “But there are so many stories of people finding Christ in our adoration chapel. I was giving a tour one day and there was a young high school student, who immediately got on his knees and just started praying. He was going to court that day but he came to me and said he has to go to church now. There is a tangible presence of Christ in the chapel.”

“The sisters at the time were so poor that they couldn’t even afford candles but they made a candle out of lard and paper. After Mass, other sisters heard Mother Antonia make a promise as she placed the lard light on the altar. ‘Dear Lord, if you bless this small band of sisters, we will establish perpetual adoration and we will build a chapel as beautiful as our means will allow,’” she said. “Now, we feel her promise it has been fulfilled 100 times over and so every year we make a lard light and I also made a lard light when I made my final vows.” 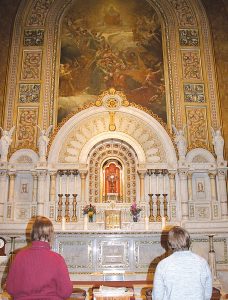 Sisters Sarah Hennessey and Julia Walsh pray before the Blessed Sacrament in the Adoration Chapel at St. Rose Convent, the mother house of the FSPA in La Crosse

“What I think is kind of audacious,” Sr. Sarah said, “was that five years later the sisters decided to rename themselves. They changed their name from Sisters of St. Francis to the Franciscan Sisters of Perpetual Adoration because they were just so positive that this is who they would be forever.”

Sr. Sarah knows that adoration is at the heart of their congregation, but what’s more important than going to adoration is taking the presence of Christ with them and bringing it out into the world.

“When we’re in that presence we feel our own emptiness and when we pray we feel we’re in the communion with the body of Christ,” she said. “There’s a direct connection between adoration and service and spreading that sense of presence. For us we say we live, loving presence. In our constitutions it says, ‘we put adoration into action by our efforts to live in continuous praise and thanksgiving for the wonders God works in us, in our congregation and in the world.’ I believe that’s what guides all of us, whether it’s as a teacher or a nurse or a spiritual director we’re all living the loving presence of Christ.”

Sr. Sarah is one of the adoration coordinators for the FSPA at St. Rose Convent and her main duty is coordinating the 32,000 prayer requests from over 88 countries that they receive every year.

“We compile those prayers and the sisters pray for them every hour by name,” she said. “We receive prayers by phone, text, on our website and by mail. Usually I do over 500 a week but sometimes, especially when a new story goes out, I’ll get 500 a day.”

During exposition, which means the Eucharist is in a monstrance and cannot be left alone at any time, those praying practice a contemplative adoration where they sit in silence in the presence of the Lord.

“We have two people in adoration every hour. Today we have about 90 sisters who do adoration and they do about 2/3rds of the hours but we also have 150 prayer partners from the wider community who have a scheduled hour usually once a week,” she said. “A prayer partner must make a covenant at a Mass and go through training but we also have open adoration to anyone in the community from 7 a.m. – 7 p.m. We asked the prayer partners once why they do it and almost all say it’s their favorite hour of the whole week, to have some quiet and be in the presence of Christ.”

Sr. Sarah knows adoration can seem intimidating or people may have misconceptions about what to do or experience when in adoration, but she just says that going is the first step to Christ becoming the center of your life.

“Boredom or getting distracted or even falling asleep is totally normal and not everyone will feel a great lightning bolt, but Pope Francis says if you fall asleep, you can let Jesus hold you,” she said. “People will ask me, why do you pray, God already knows everything? The reason we pray is not to let Him know what we need but to allow God to change our hearts. God gives us freedom and in that freedom we are transformed. I think people who pray in adoration regularly really experience that.

To learn more about how to become a Prayer Partner or to submit prayer requests, please visit fspa.org, call 608-782-5610.