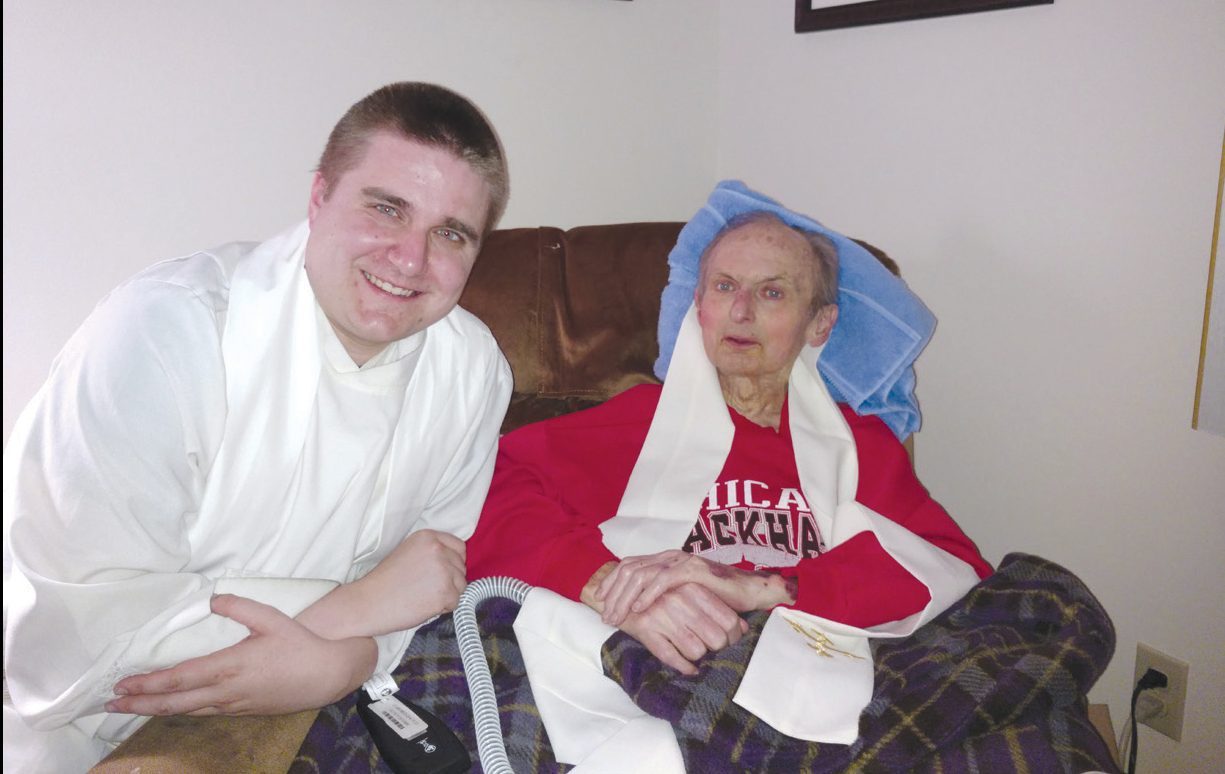 An account of the last chapter in a priest’s life

As a priest, we promise obedience and fidelity to the bishop and the church. Father Al Jakubowski couldn’t plan his own life or know the impact he would make, just that he was called to live as Christ for others.

Father Al was ordained on May 25, 1975. One of the defining traits of his ministry was his own walk with Christ as he suffered due to many health issues. It began with a heart attack at the age of 36. Having been a priest for less than 10 years, this gave him a heart for those suffering in the hospital. He wanted to dedicate his life to hospital ministry, but often was needed to take parishes instead.

This led him around the diocese until, while serving in Stevens Point, he came down with pancreatic cancer in 2007. He was very blessed that it was caught early, which led him to surviving a disease that claims most. This is when I came to know Father Al. We were brought together by a common hobby, model trains. This began a deep friendship between a newly ordained priest and a veteran pastor. Father Al would tell me many inspiring near death stories of surviving illnesses and his love for the priesthood.

Years later, I would receive a phone call in which Father Al told me he had just had a stroke that morning, but praise God the medicine was working. He was assigned to smaller parishes, and, for two days, I helped him pack. He showed me what obedience to God looks like, never complaining once. He was happy to put his plans aside as he recognized God was calling him elsewhere. A year later, Father Al had congestive heart failure, which led to other complications. Not only was the possibility of returning to active ministry gone, but his life was very much on the line. Two days later, I found myself at his bedside on Dec. 23, 2013. There was my friend, mentor and brother priest. We celebrated Christmas Mass together early, which is a Mass that could have been his last. How he saw that Mass was as his greatest Christmas gift that year! 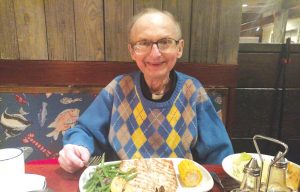 Father Al, in his favorite sweater, enjoys a meal with Father Tim.

He would continue to have health issues over the years, but he was always true to his promises as a priest despite the odds. I was amazed how he kept fighting and the patience he had with all the medical staff and his own body. We celebrated Mass regularly at his bedside and talked about trains and life. He had said for years he did not want to live his life hooked up to machines without ministry. In prayer, I heard the Lord tell me that he wanted me to care for him in my rectory. I heard that we would be living the psalm, “How shall I make a return to the Lord for all the good he has done for me?” Father Al also believed the Lord was calling him to this next chapter of priesthood, a ministry of prayer and presence to others, so he accepted.

He moved into the rectory in Dorchester in early September. Our weeks were governed by the rhythm of prayer, dialysis and doctor visits. He called us the “odd couple,” joking how different we were and often remarked in jest that he felt like he was back in seminary formation. For a bit, it seemed he was gaining ground, but no matter how much I cooked, or how much he ate, he kept losing weight. In January, after many tests it was clear that the infections had re-activated his pancreatic cancer. The doctor gave him four to six months to live.

We sat at home that night, silent, stunned but not surprised. Out of our tears, we started speaking of what his last wishes were, how he wanted to spend his last months of priesthood. They were to have a last Mass and supper with his family; to speak about suffering; and to celebrate the wedding of his sister.

Over the next months, we lived those goals. Each trip cost him more and more. He did not mind nor care as he lived how he ended each talk with St. Francis, “It is in giving that we receive.” He received hundreds of cards over these months from all over the diocese. As a young priest, these memories have formed and shaped how I see the priesthood. It was an honor to be able to plan and make these dreams a reality with him.

The psalm reading for that Mass was Psalm 116, “How shall I make a return to the Lord for all the good he has
done for me?” We both knew it was time to look for Jesus.

It was beautiful to celebrate Holy Week with Father Al. He was not going to miss any of it. He joined me for the bilingual celebration in Abbotsford. Our Hispanic Young Adult group did a Passion play and, while he did not understand the language, he cried during the whole Passion. That Holy Week he showed us Jesus, he allowed us to walk with him during his Calvary. A week later, we were making the last trip to see his family. His strength was almost used up. I remember encouraging him to stay strong, that everyone remembers the last word, not the second to last one. He cried and thanked me, calling me his guide, coach and cheerleader, as he had done many times before. In reality, it was the other way around. After the trip, he started to fade fast. His strength began to halve each day and on Friday, May 5, the bishop came and gave him the last rites. Father Al was so thankful. The next day, we celebrated his last Mass. He was only conscious for 20 seconds at a time. He prayed so diligently, his weak voice giving it everything that was left. The psalm reading for that Mass was Psalm 116, “How shall I make a return to the Lord for all the good he has done for me?” We both knew it was time to look for Jesus.

The cancer caused a lot of confusion those nights. All I had to say was, “ Father Al, its Tim, it’s OK” and he would calm down. He lost consciousness that Monday morning. I read many prayers to him and spoke of my love and how proud I was to know him, what a difference he made these past months. Tuesday morning, May 9, it was just the two of us in the rectory. I told him I was going to work on the trains a bit in the next room and would be back. Fifteen minutes later, I noticed he was not breathing and rushed into his room. He was at peace exhaling his last, a priest, in his rectory, faithful to the last breath and not being a bother. I prayed over him, wearing the stole he had worn two days earlier at Mass. Two hours later, when we came to transport his body, his face had changed. He had that goofy grin on his face that he always had. He died smiling after so much suffering and sacrifice.

I had asked Father Al what he wanted me to preach about at his funeral. He was less then helpful, except that he wanted to remind everyone that “it is in giving that we receive.” Father Al gave so much, and by his trust in me and openness about his life he showed me what priesthood is.

Each day is precious; each day is to be cherished, and shared generously and completely with others. His last words were not words, they were a smile of a priest who had given everything. He held nothing back and never once did he complain or count the cost. He had a privilege that few get in this life: He was able to express his love to his family and friends and say goodbye. He was never afraid of death and accepted it just like the many transfers of assignment. Only this time, he did not have to pack. He had already given it all away.