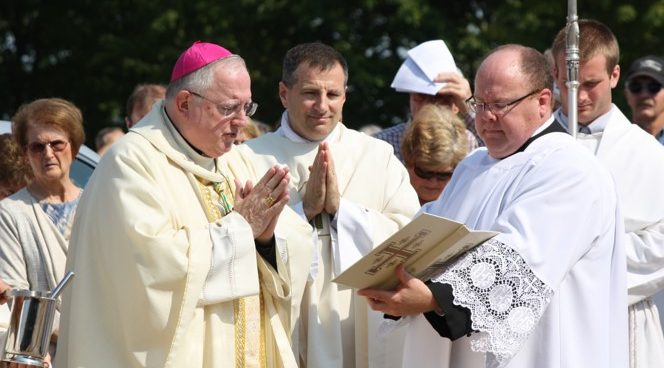 Recognizing farms from the Wausau Deanery

The 37th annual Diocesan Rural Life Day celebration was hosted September 14 on the farm of Mike and Sue Fischer of St. Florian Parish in Hatley.  This event is held each year, rotated between deaneries within the Diocese, to celebrate our connection to rural life and honor those who have made significant contributions.

Hosting the event is no small task and the parishioners of St. Florian Parish rose to the occasion to meet the needs of the more than 350 in attendance on a beautiful, Indian summer day.

The celebration began with Mass in the farm’s massive epair shop.  With the large doors open on each end, one could see crops, woods, cattle, machinery … elements of rural life upon which we depend for our food.  Bishop William Patrick Callahan said that while he was a city kid, he is very committed to supporting and promoting awareness of the importance of agriculture and rural life.

Following Mass, awards were given to individuals from the Wausau deanery.  Charlie and Dorothy Lang from Edgar were recognized for the Strangers and Guests Award, which honors an outstanding farm family both in the management of their farm as well as living their Catholic faith. The name of this award is taken from Leviticus, Chapter 25, where God says to the Jewish people, “The Land belongs to me, and to me you are only strangers and guests.”

Farms in the Wausau deanery, which have maintained active ownership in the same family for 100 or more years were given Century Farm awards.  There were eleven such awards given by Bishop Callahan this year.

Many people make significant contributions to rural life without actually farming.  The Friend of Rural Life award, recognizes individuals who are not farmers but are involved with and/or promote rural life as well as living their Catholic faith.  This year’s recipient was Yia Lo Lee, who is also recognized as the matriarch of the Hmong community in Wausau.  The produce and chickens she has raised go to local Farmer Markets and are freely given for the needs of the community.  In fact, when she was informed of receiving the award, her first question was, “What food could I bring?”

It was very fitting to honor Yia Lo Lee this year as she is an immigrant.  Mike Fischer, a man of few words, while sharing his gratitude to all who helped and those in attendance, reminded everyone that agriculture today relies on immigrant workers.  Which ironically, is not much different than when the century farms that were honored were being established – often by a recent immigrant of the time.

Next year, the celebration will be held in the La Crosse deanery on the farm of Dr. Ann Elwing from St. Charles Borromeo Parish in Genoa.