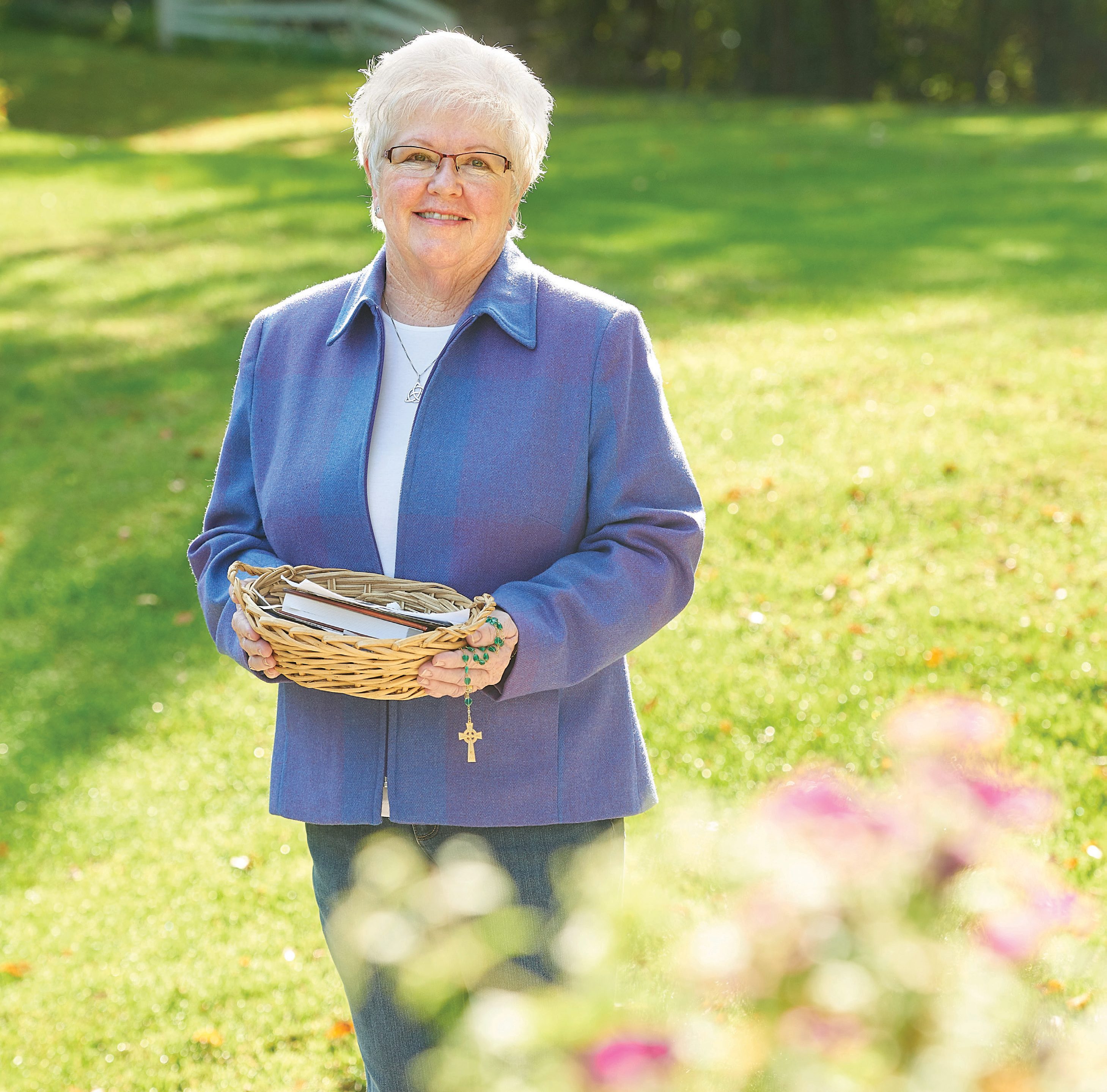 A month before she received a diagnosis of pancreatic cancer, Mary Murray Woods felt the presence of death in her mind. A parishioner of Guardian Angels Parish in Melrose, she spoke with Father Bob Streveler about her thoughts.

“I had gone to an advent retreat at St. Anthony Spirituality Center in Marathon, Wis., in December 2015. Prior to going, every day and every night, dying was on my mind. I don’t know what prompted these thoughts,” Mary says. “I said, ‘Father Bob, I need to talk to you. I keep dreaming, I keep feeling like I am dying.’” He replied that perhaps the death of her brother a little over a year ago came into play. He died a month after being diagnosed with pancreatic cancer.

Sharing her thoughts with Father Bob, though, gave her peace. Then, on Jan. 29, 2016, Mary and her husband, Curt, were given a diagnosis of her pancreatic cancer by Dr. Kelley Bahr at Gundersen Health System, La Crosse.

Mary had a premonition five years before while working in the Black River Falls Public Library-Jackson County History Room. “I wondered what age I would be when someone filled out my obituary card, and 87 popped into my mind,” she says. “Even when my doctor told me I had cancer, I didn’t think I would die from it because I’m supposed to live to be 87.”

After the shock of the diagnosis, Mary underwent eight chemotherapy treatments in hopes of being a candidate for surgery. Tests showed the cancer had not metastasized, which was a blessing.

During this time, Mary had people from all different faiths praying for her recovery. “I worked in an environment where my co-workers were strong in their faith,” she says. “Most of them were church-goers. They had a true faith. It was important to have that kind of work environment. Faith was always around me. Along with Father Bob, there was Msgr. Malin, Father Paar, Sister Bridget, and Deacon Ludick of St. Elizabeth Ann Seton Parish in Holmen there for me. There was such goodness in people. The cards, phone calls and the financial support were overwhelming. I don’t know if people realize how good they are.”

She kept a basket with all the prayers and prayer cards people gave her. The basket of prayers is key, Mary believes, to what happened next. 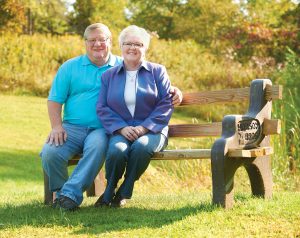 Mary and her husband Curt sit on a bench on their spacious property in Melrose. Reflecting back,the prayers of Mary and her family, friends and acquaintances had been answered with a miracle. She doesn’t know why God blessed her, but suspects it is because he has a task for her.

“I had gone through two or three chemo treatments,” says Mary. “One night, I was in my dining room and something happened to me. It was like a surge of energy went through my body. I thought, ‘My goodness, what was that all about?’”

A month later, she got another surprise during a CT scan. There was a significant response to the chemo, as the pancreatic mass had decreased in size almost to the point of being invisible. Mary finished eight chemo treatments and, after successful testing, underwent surgery on Oct. 3, 2016, at UW Health in Madison.

“When I went to Madison, they couldn’t find the tumor,” Mary says. “Every test they took was negative. It was kind of a miracle.”

The surgeon told Mary that some may question why she performed surgery, based on test results. Three-quarters of her pancreas, her spleen and gall bladder were removed. In 48 tissue biopsies, no cancer cells were found.

The prayers of Mary and her family, friends and acquaintances had been answered with a miracle. She doesn’t know why God blessed her, but suspects it is because He has a task for her.

“He hasn’t told me yet what He wants me to do,” says Mary. “I believe so strongly we are all given talents. We are put on earth to use and, more than that, to share those talents.”

One thing she does know is the prayers shared with her and said for her helped create a miracle. “People prayed for me all over, whether it was Catholics, Methodists, Lutherans or other faiths. I had a friend in Ireland who went to one of the holy wells and said the rosary for me,” Mary says. “I was on prayer chains all over the country. I still carry my basket of prayers with me; it has become part of my life.”

I would never question as to why I’m alive. God will let me know,” SAYS MARY. “I have a goal for myself. When I was lying in the hospital bed, I thought I had to do something to mark my blessings.

Her life after surgery has not been much different than before — Mary works, is active in her parish and enjoys time with her family, which includes her two children, Murray and Emalea, their spouses, Nikki and Kenny, and her four grandchildren: Jack, Cael, Adelyn and Brynn.

She is writing a book, Coincidences of Cancer, about her unique experiences.“I would never question as to why I’m alive. God will let me know,” says Mary. “I have a goal for myself. When I was in the hospital bed, I thought I had to do something to mark my blessings.” Her goal is to travel to Ireland next May and participate in the Famine Memorial Walk in County Mayo. The walk commemorates the deaths of hundreds of starving people on March 31, 1849, who traveled more than 10 miles on Doolough Pass in hopes of getting food during the Great Famine. Mary wants to use her walk to raise money to battle local hunger.

On a daily basis, Mary continues to use prayer for inspiration. She says the rosary every day on her way to work “As I drive to work, I notice the beauty of the changing seasons,” she says. “God has put so much beauty in our lives. I’m just so overwhelmingly thankful.”