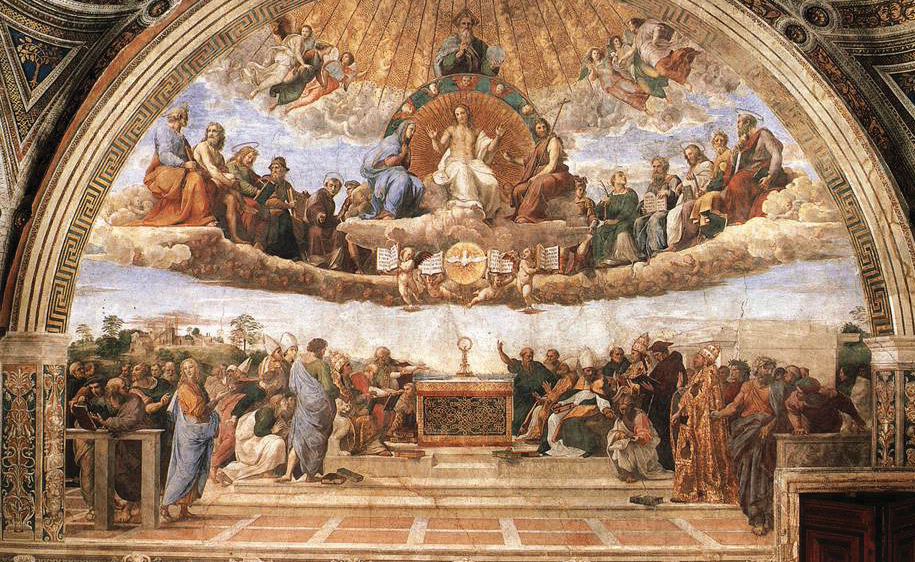 During November, the Catholic Church draws our attention to the doctrine of the Communion of Saints in a very special way. On Nov. 1, we, the Church Militant, who are involved in our earthly pilgrimage, celebrate the Solemnity of All Saints, known as the the Church Triumphant. On Nov. 2, we celebrate All Souls’ Day, a commemoration of the Church Suffering who have finished their earthly pilgrimage, but whose souls are in a state of purification in the afterlife.

The doctrine of the Communion of Saints reminds us that the Catholic Church is always a family; it is a communion, which takes on a visible form in “the community of faith, hope, and charity through which Christ communicates truth and grace to all men.” (Catechism of the Catholic Church, paragraph 771)

The Church Militant is on pilgrimage, striving for virtue, the defeat of evil and yearning to be united with God, the Blessed Virgin, the angels and the saints in heaven. The Church Suffering reminds us that since nothing defiled can enter heaven, the souls of those who die in a state of venial sin or who have not fully atoned for any remnants of temporal punishment owing to their sins must enter a temporary state in their passage to heaven, called purgatory, where they are subsequently cleansed. Souls in purgatory cannot help themselves, thus they rely on the prayers, Masses, sacrifices and indulgences offered and gained by the Church Militant, and, of course, on the prayers and intercession of the Church Triumphant. There is a tradition in the Catholic Church that the souls in purgatory, however, can assist the souls on earth (the church militant) by offering their sufferings for them. The Church Triumphant is the immersion into the beatific vision, the final goal of both the Church Militant and the Church Suffering.

Prior to the liturgical reform of Vatican Council II, the sanctuaries in Catholic Churches were built in such a way as to remind the faithful of the Communion of Saints. Three steps were incorporated into the floor plan. The priest offering the holy sacrifice of the Mass had to ascend those three steps before he stood before the high altar to offer worship and praise to God on behalf of the living community and for their needs (Church Militant), for the deceased (Church Suffering) and in joyful remembrance of the holy ones in heaven (the Church Triumphant). A Catholic was thus always at least implicitly reminded that the church was a family, whether in life or in death or in heaven. The doctrine of the Communion of Saints — the bond that exists among all the faithful, whether living, deceased or triumphant in heaven — is, indeed, a consoling doctrine. We are a family, and we remain a family.

During November, as the current civil year is almost finished and the Church once again looks forward to the new Church year of Advent, Catholics are reminded of the awesome fact that the Catholic faith is always a community. That is why the faithful, the living on earth (the Church Militant), take seriously the other two phases of the Communion of Saints, the Church Suffering and the Church Triumphant, in their liturgical and private devotional life.