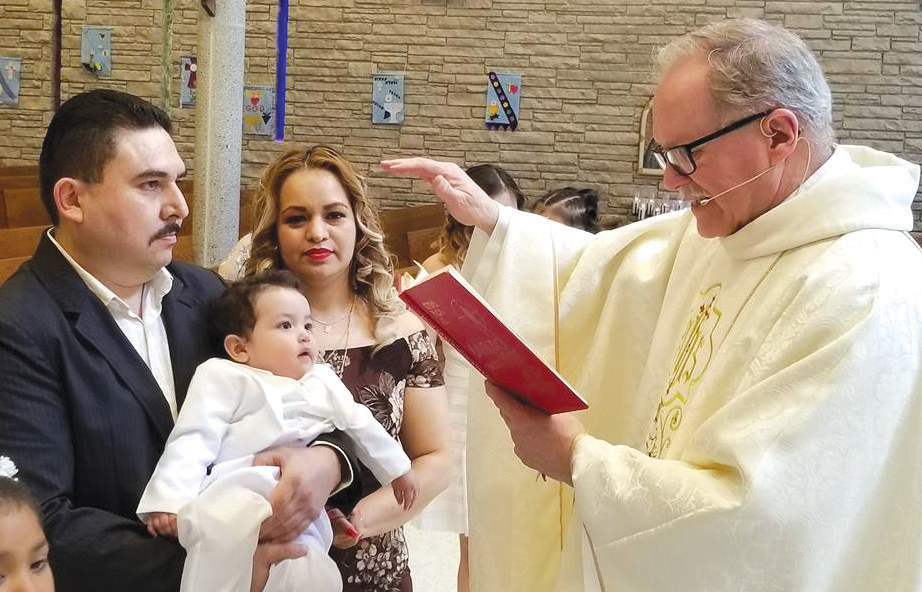 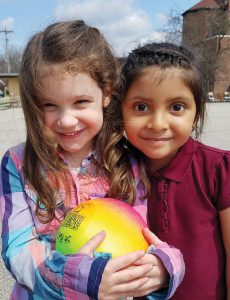 Jesus’ heart burns with desire for all mankind to be “one flock,” with “one Shepherd” (Jn 10:16). Throughout her 150 years of existence, the Diocese of La Crosse has sought to respond to this desire, taking shape first from Native Americans and later on from the waves of European immigrants. The sheepfold continues to expand today, welcoming people of Hmong and Hispanic descent.

Today, the Hispanic community counts more than 20,000 members throughout the Diocese of La Crosse. Mass, sacraments and pastoral care are provided by 8 Spanish-speaking priests at parishes in Abbottsford, Alma Center, Altoona, Arcadia, Sparta, and Wausau. In addition, Mass, confession, pilgrimages and special events are also offered at the Shrine of Our Lady of Guadalupe in La Crosse. Other forms of outreach are provided through Immigration Services of Catholic Charities.

A welcoming priest serving the Hispanic population in the Thorp deanery is Father Tim Oudenhoven, who has worked with Hispanics at St. Bernard Parish in Abbottsford for the past four years. ﷯Father Tim says, “The vision of the diocese is to have Hispanic religious centers accessible within a 40-mile radius of the majority of Hispanic Catholics living in the diocese.” When asked about the prominence of the Hispanic influence in the Abbottsford area, Father Tim replied, “It is thriving. We have 350 to 550 Hispanic Catholics attending Sunday Mass.”

“The Feast of the Holy Cross on September 14 was an all-day party. There are native dances. People dress up in the customs of the home town of their origin. There is special food and cookies, made only for this feast in Mexico.”

Father Tim noted a particular aspect of Hispanic spirituality. “Hispanics are very devotional,” he said. “You go into their homes, and there are pictures of Mary, the Saints, and the Last Supper. There will be an altar in the corner and statues. The families regularly pray the rosary or other devotions together.”

Feast Days are big in the Hispanic culture; Holy Week, Christmas, Epiphany, Day of the Dead (All Souls) and of course Our Lady of Guadalupe. Father Tim said, “The Feast of the Holy Cross on September 14 is an all-day party. There are native dances. People dress up in the customs of the home town of their origin. There is special food and cookies, made only for this feast in Mexico.” Father continued, “Corpus Christi was huge this year. Police closed off a few roads and there was a five-mile procession. When people die there is a novena of rosaries for 8 days with 40 or 50 people gathered in a home. The funeral is very hands-on, with a walking procession with the casket carried on shoulders.”

There are many special devotions for children. In addition to baptism, forty days after birth, the baby is beautifully dressed and brought to the Church for a special blessing by the Priest. Three-year-olds have the Presentation, which is a prayer whereby the parents ask God to help them raise their child to fulfill his will for their lives. It is a commemoration of Jesus’ Presentation in the Temple and it signifies, “This is a child of God.” The young girls are beautifully dressed and the boys don a suit coat, white shirt, new shoes, and a small sombrero hat. Abbotsford has 30-40 of these each year.

At age 15, girls celebrate the Quinceañera, a Mass of Consecration that celebrates their transition from childhood to womanhood. Begun in Spanish villages centuries ago, it is a coming of age rite which signifies chastity and living with dignity. It is conducted with great ceremony and each girl is beautifully dressed. “We do 9 or 10 of these each summer,” Father Tim said.

Father Tim explained that full integration of Hispanic and English-speaking communities requires time and patience. “We want the English and Hispanic communities to come together. What will it take for this to happen? We must teach a bilingual faith. You can’t force these things. It may take a decade or more for that to happen.”

Father Tim noted that it will take diplomacy and compromise on the part of both communities. “It’s not racism,” he said. “People tend to drift to where they feel most comfortable. We want them to come together with more trust and collaboration. Both need the same outlook, the same goals. The faithful must walk both sides. It’s like a marriage.” This process is not new in the Catholic community. Father Tim alluded to former times when German and Polish immigrants, in the same town, built their own churches, often blocks from each other.

We are one Church. At the heart of her mission lies respect for human dignity and a shepherd’s care for souls. The good news is that the Catholic Hispanic community in the Thorp deanery — and in the diocese — is thriving and enriching us all. It is the hope of Father Tim and the other priests serving our Hispanic brothers and sisters that, with mutual love and respect, we may become ever more “one flock, with one Shepherd.”
By Larry Scheckel
Photography submitted by Father Keith Kitzhaber and Joy Orozoco