On June 30 at 10 a.m., Deacon Kyle Laylan and Deacon Barry Saylor were ordained into the priesthood of Jesus Christ. The Cathedral of St. Joseph the Workman in La Crosse was filled with family, friends, classmates and educators ready to celebrate the gift of ministry accepted by these two men.

Despite entering the sacrament of Holy Orders at different times in their lives, Father Kyle and Father Barry are joyful to enter God’s service as shepherds of His people. 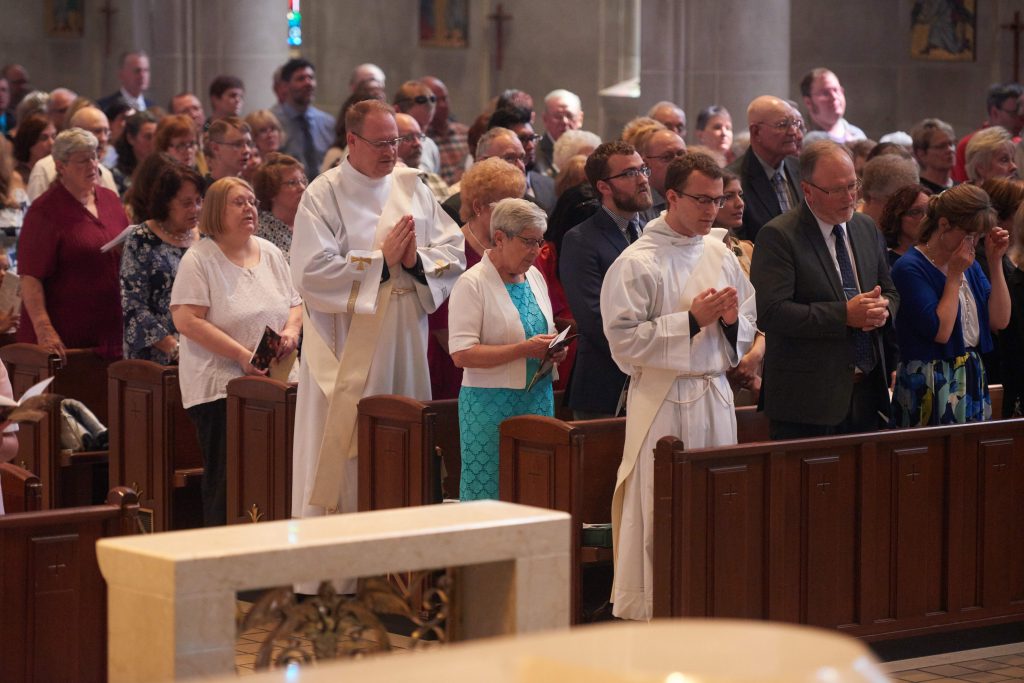 Father Barry Saylor
Father Barry made a major life change to answer his call to the priesthood. “It’s really been hard for me. I’ll be ordained at 51,” he says with a laugh. “Starting this whole process later in life is not easy.”

He first heard the call in the seventh grade. “I actually called the seminary in Fond du Lac to talk to the priest there, unbeknownst to my mother. I said I really want to come there next year. I made an appointment for him to come to Wisconsin Rapids,” Father Barry says. “There was this knock on the door and my mom said, ‘There’s a priest out there.’ I said, ‘Oh, I forgot to tell you.’”

St. Lawrence Seminary was too far and he was too young for his mother to agree. “So, I kind of put that on the back burner,” he says.
After attending public high school in Wisconsin Rapids, Father Barry joined the Army and was stationed in San Antonio, Texas, where he lived for 25 years. His second call came in the Army during a Catholic missionary’s presentation.

Inspired, Father Barry contacted the archdiocese’s vocations director, but did not hear back, even after his follow-up. “So, I just put it out of my head. I got out of the Army, stayed in San Antonio and started working,” says Father Barry.

After leaving the Army, he began a career with the car company, Saturn. Once he had nights and weekends off, Father Barry got more active in his parish, Ss. Peter and Paul. He was a minister for the homebound, joined the Knights of Columbus and was a fifth- and sixth-grade CCD teacher.

“It was really nice to be active in a church,” Father Barry said. “The parish was a close-knit family. It just was a beautiful experience.”
Becoming involved with the Adoration Community Theology and Service (ACTS) retreat, sponsored by the Knights of Columbus, drew Father Barry closer to the priesthood.

After participating in a retreat, he decided to work the next retreat.

“As names start coming in, you start praying for people going on retreat. One of the seminarians from that parish was going to be on that retreat,” says Father Barry. “Right away, I started praying, ‘Don’t put him at my table. I don’t want to hear his story, I don’t want to talk to him. I’m too old at this point.’ I was in my 40s. Sure enough, I get to the retreat, flip over the name and there is Jason Martini. So, we talked a lot. His story was similar to mine. He was an older vocation.”

At this point in his life, Father Barry was financially comfortable and found himself reluctant to change. Martini recommended Barry meet with his spiritual director, an Oblate.

“We talked for two-and-a-half hours the day after I got back from retreat. I fully expected him to say, ‘You’re too old.’ But he didn’t,” Father Barry says. “We met for a year and during that year, he gave me the application and said, ‘It’s time. You need to apply for seminary.’”

He studied pre-theology in the Archdiocese of San Antonio. During his last year of pre-theology, Father Barry felt called to be home with family in Wisconsin.

Through seminary formation at St. Francis, Father Barry kept thinking about how to answer why he wanted to be a priest. It was more than helping people. Finally, he discovered the answer.

“I want to help people see Christ,” says Father Barry. “A priest is the image of Christ. He’s not there for fame himself, he’s not there for recognition, he’s there as the face of Christ. That’s how I’ve moved through seminary, that’s been my big focus, ‘Am I doing something that is pleasing to Christ and are people seeing that in me?’” 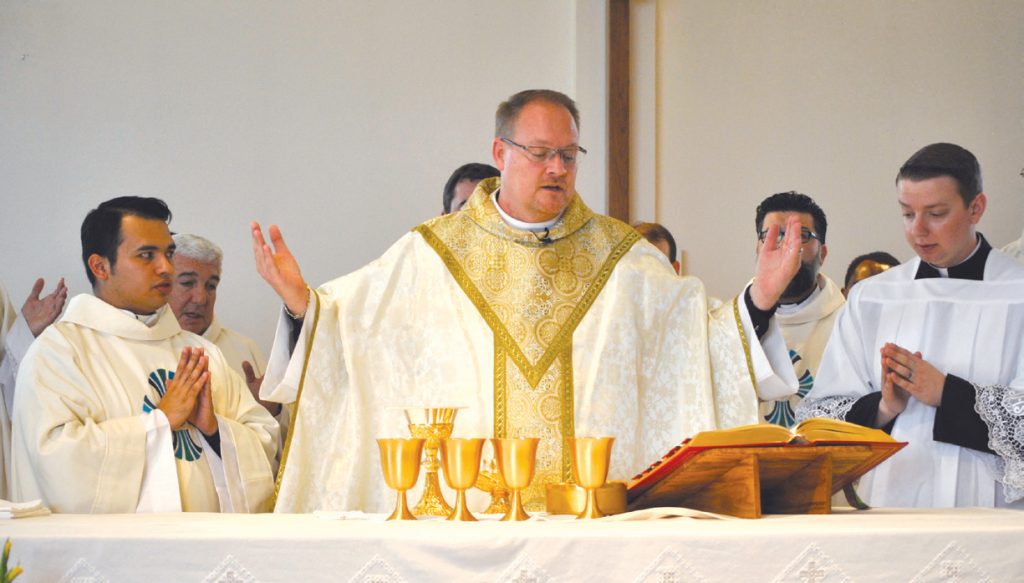 Father Barry celebrations his first Mass at St. John the Baptist in Marshfield.

Hospital ministry was both a challenge and validation for Father Barry. “My first overnight I had three deaths in the first hour, and one was an 8-month-old baby,” he says. “I went to the chapel and said, ‘I am here for these families, but who is here for me?’ A loud voice came back and said, ‘I am.’”

For older men discerning how God is calling, Father Barry says, “Just ask. God is always calling us to do something. It could be anything. We just have to listen. Prayer is more listening than asking. God never gives up. No matter how far off the line you go, he always draws you back.” 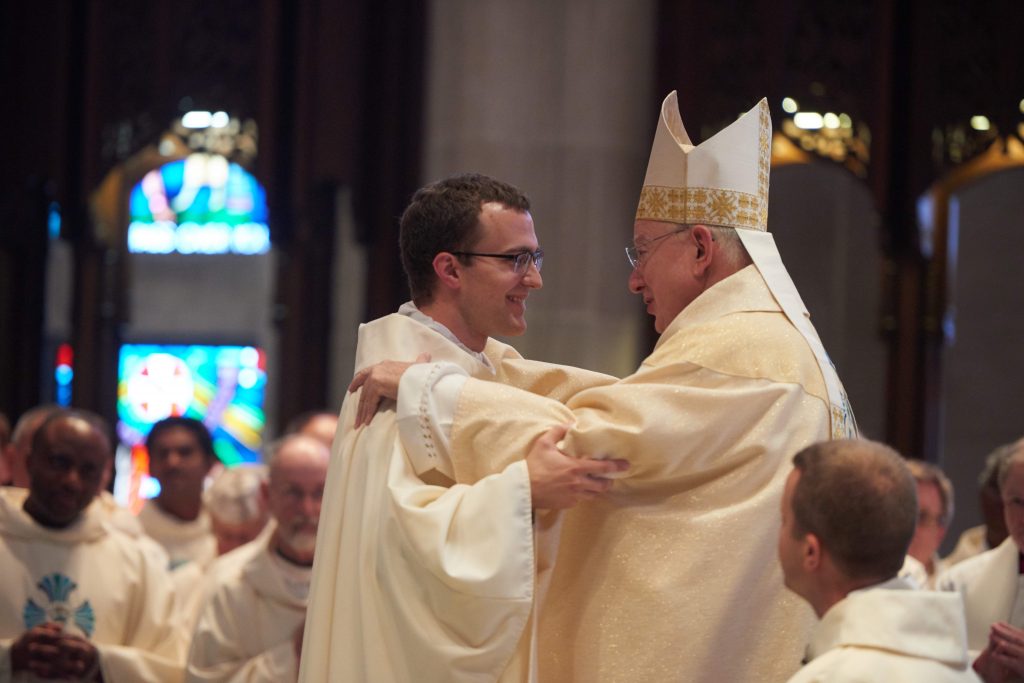 His parents own and operate a restaurant in Tomah, and all five boys worked in the restaurant while they were growing up. Serving others was part of Father Kyle’s life from the beginning.

In adulthood, Father Kyle’s call to serve took him in a different direction. “My vocation goes back to when I was very young. Somewhere between 7 and 10 years old it was planted,” Father Kyle says. “I always knew in the back of my mind I was going to be a priest one day. While there were times when I wasn’t so attracted to it and I didn’t totally have the courage to say yes to it, the feeling was still there. I knew I would be a priest.”

After graduating from high school, Father Kyle was not ready for the seminary. Instead he went to University of Wisconsin-Eau Claire and began studying social work. “I knew I wanted to help people,” he says. 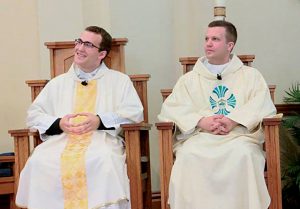 Father Kyle celebrates his first Mass at Queen of the Apostles Parish in Tomah.

He was destined to help people, but not in social work, as God made clear to him. “For me it comes down to one moment when I felt God speak to me,” says Father Kyle. “It was pretty random. I was at a restaurant, Applebee’s in Eau Claire, and I felt God say to me, ‘Go to seminary.’ Call me crazy, but I was convicted, and the next day I called Msgr. Hirsch, vocations director at that time. I feel like God, through that experience, was just confirming what I had known, saying, ‘OK, Kyle, it’s time.’”

During the next three years at University of St. Thomas Catholic College Seminary, Father Kyle majored in philosophy and Catholic studies. Next up was St. Francis Seminary in Milwaukee and Sacred Heart Seminary in Oneida to earn his master’s degree in divinity and prepare for ordination to the priesthood.

“The seminary process has been a process of diving deeper into my faith and my own personal conversion. I can’t believe that seven years have passed,” Father Kyle says. “One of the areas which I’ve grown in and come to see more clearly is the situation of the people. I’ve come to understand people on a deeper level and myself on a deeper level.”

The growth in understanding of the human condition provided insight to Father Kyle about how much Christ is needed in this world. “I’ve become more and more convicted about how important the priesthood is for our world,” he says.

Hospital ministry had a big impact on Father Kyle. The opportunity to share faith and God’s love and mercy with people during their most difficult times was eye-opening. He deeply appreciated the occasions to pray with them, comfort them and just be at the side of those who were dying.

“We have been presented with opportunities that stretch us,” says Father Kyle. “There are privileged moments. On the flip side, there have been some very joyful moments. I have done baptisms. Those were awesome experiences.”

Some of his life-changing moments happened outside of the seminary, and, in fact, outside of the country. “Another experience that really impacted me was going to Bolivia. I went there twice,” Father Kyle says. “I helped out at a hospital for AIDS patients, and I also helped out at a Catholic school there. All those relationships I formed with people in Bolivia greatly impacted me and gave me a deeper insight into what people are going through.”

As a priest, Father Kyle sees himself bringing Christ to the people, a role of priests since the beginning of the Catholic Church, even though the methods have changed over time. “The way to engage people may be different than it was 50 or 200 years ago,” says Father Kyle. “I really have no idea what God is going to do in my life. It’s pretty exciting.”

He believes the key to success is found in release. “I feel an invitation from God to surrender more, to say ‘I’m your instrument, I’m not going to control or manipulate my life to make sure it goes a certain way.’”