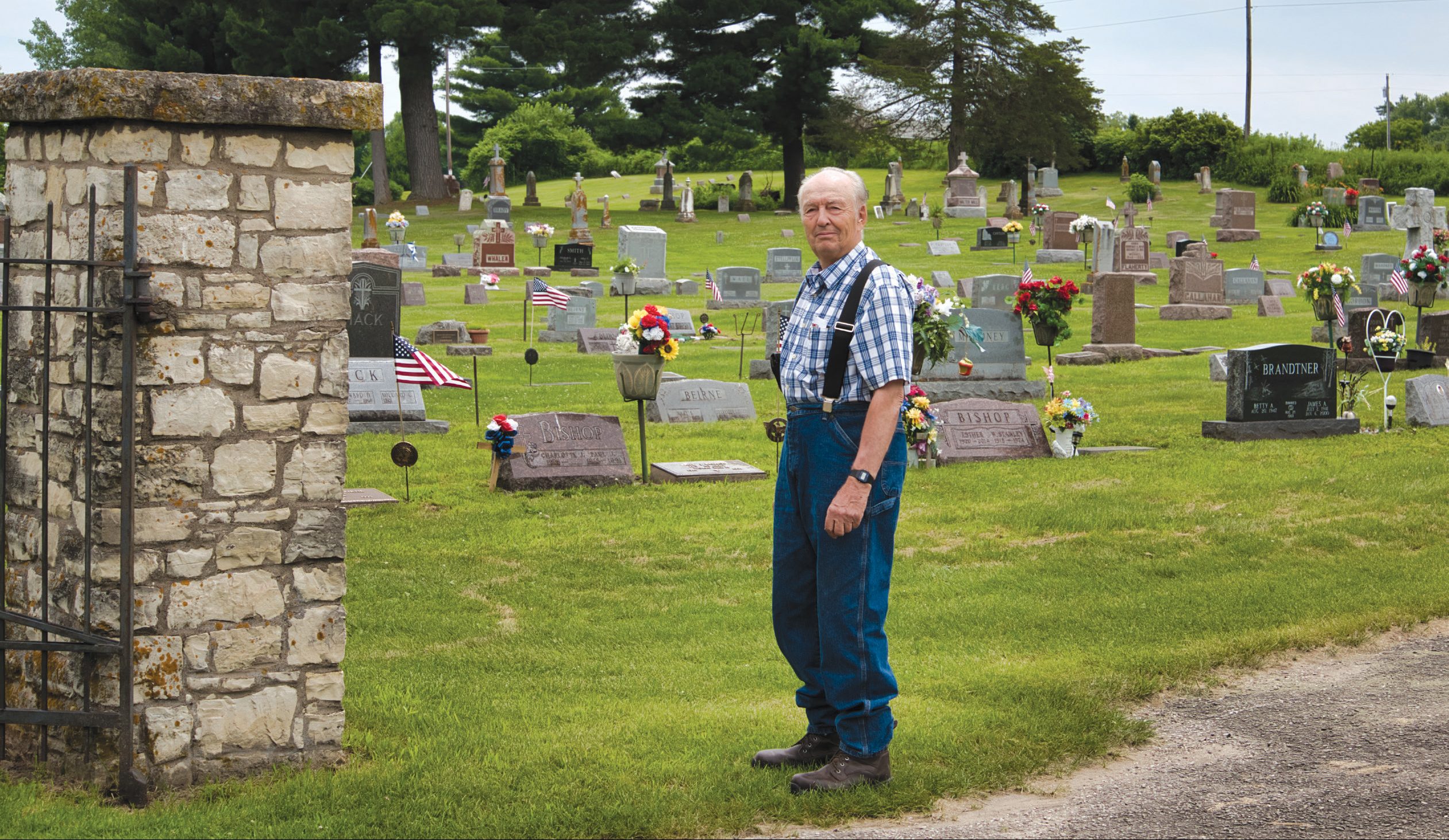 William (Bill) Crogan is the person one contacts when something needs to be fixed, maintained, modified or constructed at St. Bridget Parish in Ettrick. He would rather repair something than replace it with new. Bill adopted an attitude from his grandfather, who had a saying: “Fix it up and make it do.” Bill is St. Bridget’s director of maintenance. 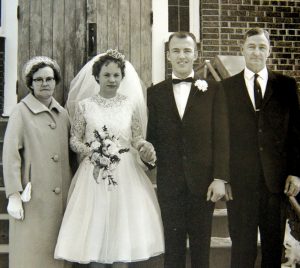 Bill was born in 1940 at St. Charles, Minn., to Vilas and Ida Crogan. At that time, Bill’s father worked as a traveling farmhand and would go to Iowa to pick corn — by hand! Bill says, “His dad told him that a good person picking corn by hand would have three ears in the air at once: one before it hit the bang board (high side on the horse-drawn double-box wagon), one in mid-flight and one leaving the hand.”
Six years after Bill was born, he and his parents moved back to Ettrick to rejoin the rest of the Crogan family, who settled in the hills and valleys of this part of western Wisconsin known as the “Coulee” (from the French for “flow”) region. “Our family originally came to the States from Ireland in the mid-1800s and settled in Bloomfield, N.J., where they ran mills making men’s felt hats. [Subsequently,] one of the sons traveled to Ettrick to farm [upon hearing that there was farmland available in Wisconsin].”

Bill was in high school when he got his first “real” job. “It was in 1956 pushing a mower [by hand] on the grounds of the [St. Bridget Catholic] cemetery. I got 85 cents an hour. It took me two days to do the mowing,” he says. Bill was hired by his father, Vilas, who was the sexton of St. Bridget at that time. Vilas and several others assisted Father Murphy in organizing the cemetery, which dates back to 1862, and building the first maintenance building. “In the early days, a lot of the monuments were made of wood. There was no mowing – that was a modern invention. After a while, the wood would rot and disappear. Steam engines [working in adjacent fields] would come down the hill by the cemetery, sending sparks into the grass, which would catch on fire burning the wooden monuments,” Bill explains. Eventually, stone monuments replaced wooden ones. Bill’s father took on the responsibility of selling lots and maintaining the clean-cut look of the cemetery and its records, a role that Bill’s brother, Donald, fills today. Most recently, Bill designed and built the cemetery maintenance building using funds donated by the Walter Wall family.

“He adopted an attitude from his grandfather who had a saying: ‘Fix it up and make it do.’”

Following high school, Bill enrolled in DeVry University in Chicago, where he earned an associate degree in applied science and industrial electronics. He went to work for General Dynamics, which was building Atlas missile sites. After that project was complete, Bill went to work for Boeing, which was constructing the Minuteman missile systems. It was during the time he was working in North Dakota that he met his future wife, Evelyn. Originally from Vermont, she traveled with another Boeing family, caring for their children. Bill and Evelyn briefly came back to Ettrick to be married in St. Bridget Church in 1964. Then the couple traveled all over the United States while Bill worked on the Boeing project – about 1,000 Minuteman sites in all in more than 17 years.

After the Minuteman project ended, Bill and Evelyn returned to the family farm in Ettrick, where Bill went to work with the local telephone company: General Telephone at first, then GTE and now CenturyLink: Bill retired from that job in 2006 after 20 years.

Bill said, “A lot of people dream of traveling to this place or that place. Well, we got a chance to travel from coast to coast and I got paid to do it. Now I don’t need to travel anymore. Ettrick is the best place to live. You just feel free.” 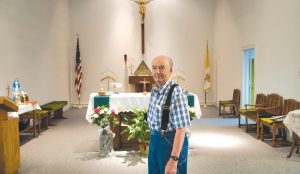 Bill Crogan stands in front of the altar area of St. Bridget Church.

Despite an early absence from Ettrick and the St. Bridget Parish community, the strong bond that Bill and Evelyn formed with the Crogan family and the extended St. Bridget Catholic family was not broken, and eventually brought them back home to enjoy neighbors and the tranquil countryside of the Coulee hills and valleys where life is more relaxing and tends to be less stressful than that found in urban areas. Bill and his brother, Donald, continue the legacy of their father by caring for St. Bridget Church and Cemetery, overseeing repairs and records. As a youth, he served for Mass, reciting the prayers in Latin. Today, he pulls on the rope that rings the bell that calls people to worship on Sundays.

St. Bridget parishioners of Ettrick can rest easy knowing Bill is on the job directing the maintenance of their church. Bill’s family is one of about 90 families that take enormous pride in St. Bridget Church and help maintain it as a special holy place to honor our Lord.

St. Teresa of Calcutta once said, “Faith in action is love, and love in action is service. By transforming that faith into living acts of love, we put ourselves in contact with God Himself, with Jesus our Lord.” Bill Crogan lives his faith in this way and offers this observation, “I could see early on that the Church, although spiritual in nature, also had physical needs to survive and flourish. I have just tried to provide a wee bit of time, talent and treasure when able to fulfill the needs as they may arise. The Lord helps those that help others!”