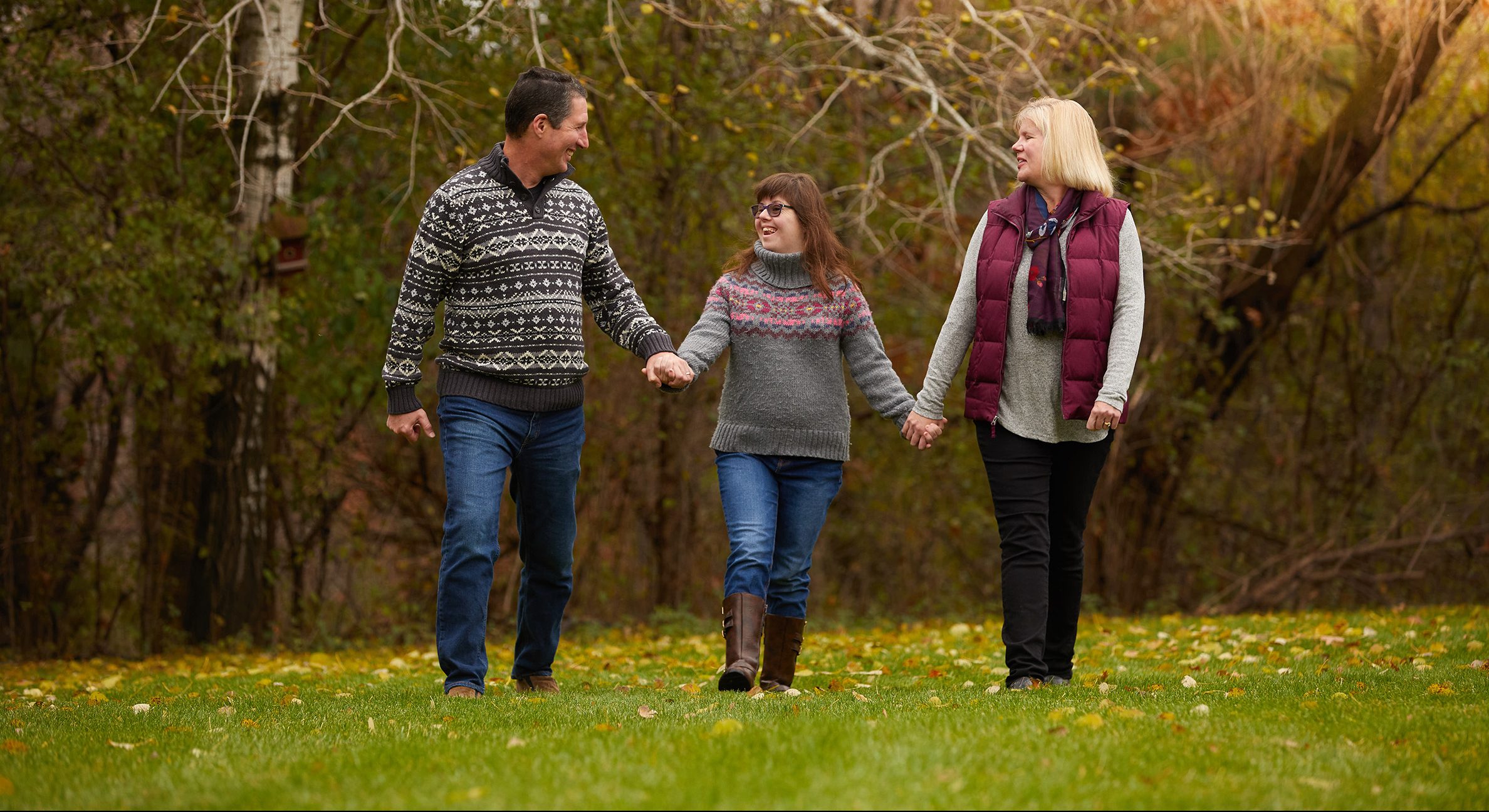 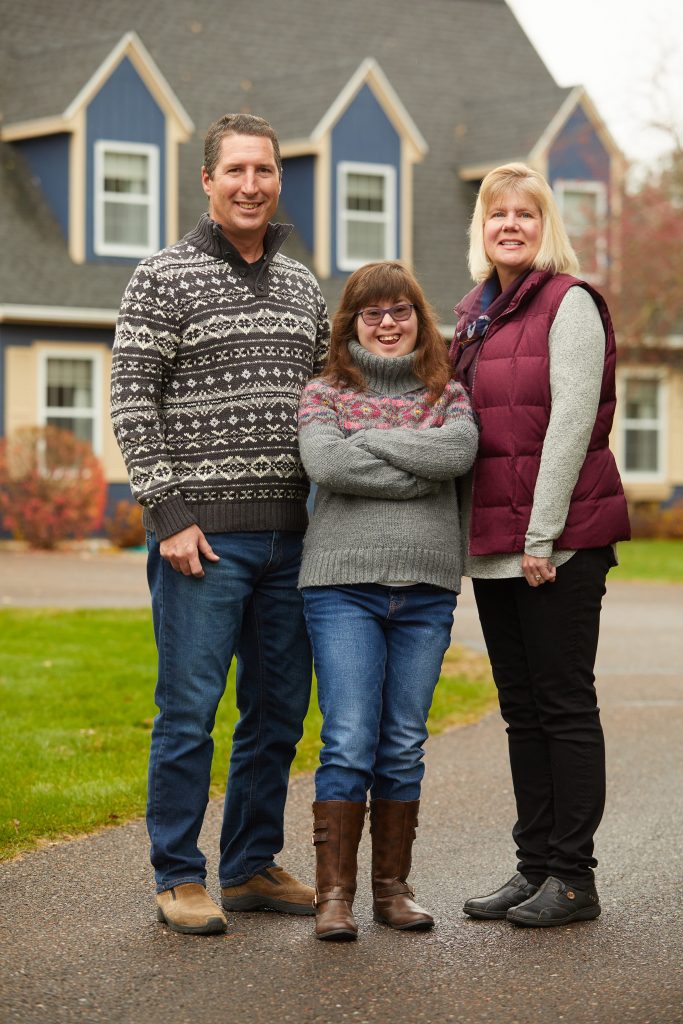 St. Joseph parishioners Brian and Carla Kieffer of Menomonie have three kids they adore. God is at the heart of their family, and His support and guidance have led the Kieffers through the ups and downs of life.

Megan, 23, is studying optometry at Ohio State University, Matthew, 19, is a chemical engineering student at Iowa State University. Their middle child, Meredith, 22, is an enthusiastic employee of Applebee’s. All through their lives, Brian and Carla have focused on sharing the love of God and their love of the Catholic Faith with Megan, Meredith and Matthew. Brian and Carla know life will not always go as expected for their children, but if the three young adults trust in God’s guidance they can navigate the unexpected.

For Brian and Carla, the unexpected happened on Thanksgiving Day in 1996, just after their middle child Meredith was born. “They told us they thought she had Down Syndrome,” says Brian. “We didn’t know anything about Down Syndrome at the time.”

“Meredith having Down Syndrome completely blindsided us,” Carla says.

The doctor eased their concerns right away, predicting Meredith would have a full and active life. “We took her home and have been learning as we go,” says Carla. “We prayed a lot that somehow God would give us the tools to guide her.”

“There was a lot of fear of what she was capable of, but we just treated her as one of our other children,” Brian says. “Us treating her like our other children helps expose people to children with Down Syndrome and takes the unknown away. There is so much happiness she brings to our family.” Because they didn’t hesitate to share Meredith with the community, there have been positive connections made in every part of their lives. Whenever support was needed, God sent the Kieffers just what, or who, they needed. 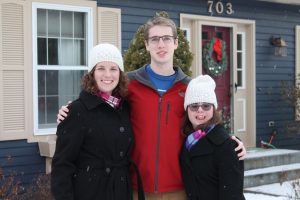 With the love the family has for each other, most of the support has come from within. Brian and Carla quickly understood Meredith would have the same basic needs and desires as her older sister and younger brother. They worked hard to help Meredith achieve all her goals.

Megan and Matthew have always included their beloved sister in their lives, acting as protectors of her in school, and sharing their friends with her.

“They knew Meredith wanted to be one of the regular kids, and included her in what they were doing,” says Brian.

“Meredith definitely has benefited from having an older sister and a younger brother,” Carla says. “They had to learn to be compassionate and inclusive. I give them a lot of credit for her success. Megan and Matthew have done a fantastic job.”

Meredith has always had a knack for opening hearts and doors to opportunities, thanks to her extroverted nature and self-confidence. “She’s been a blessing to a lot of people,” says Carla. “You won’t forget her once you meet her.”

“Teachers who were hesitant to have Meredith in class very soon became her cheerleaders,” Brian remembers. “She’s changed a lot of attitudes in the school system,” he says. “I think Meredith has changed a lot of people’s opinions of what people with disabilities can do.

As for things Meredith and her parents were told she would never do, Meredith has proved the prediction﷯s wrong. She can read, has a job and does many things on her own.

“Meredith has given a face to what people fear, and breaks down barriers wherever she goes,” says Carla.

Meredith is very active within the parish. Every week after Mass she helps with hospitality – making sure no one goes without a doughnut.

She works Monday through Friday at Applebee’s as a prep cook. “The restaurant has been wonderful to work with,” Carla says. “They have welcomed her and made her part of the Applebee’s family.”

The hardest thing for Meredith right now is having her sister and brother away at college. “She has not adapted to being the only child,” says Carla with a laugh. “She loves having people around.” 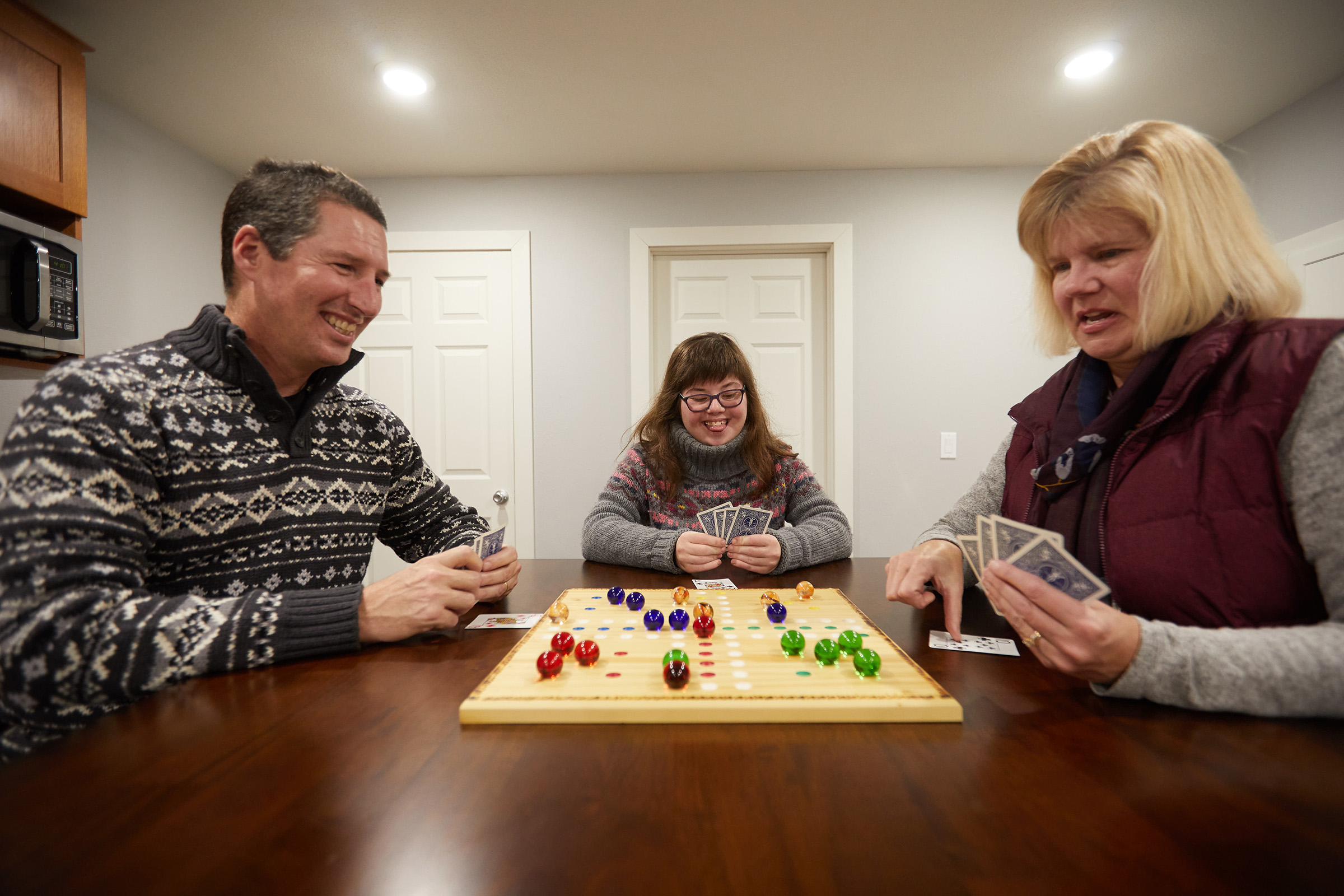 If Meredith has her way, she will soon move into her own home. Brian and Carla support this goal, even though they love sharing a home with her.

“She wants to have a place of her own. We are working on that,” Carla says. “It will definitely be hard for me. She is just fun to have around.”

Over the years, it became very clear to Brian and Carla that all children have the same hopes and dreams. As parents, they help Megan, Meredith and Matthew to achieve their dreams while navigating difficulties.

“When you have a struggle, that’s just a place for opportunity,” says Carla.
She believes the Kieffer children can succeed because of love – the love of their parents and of their heavenly Father. “One of the best gifts you can give your kids is a good marriage,” she says. “God has provided us with the tools and inspiration for 26 years. That’s how you create a good family.”

They know Meredith may seem different, but believe there’s nothing wrong with being different. “Children are a gift from God no matter what package they come in,” says Carla. “That’s how we were raised. We are going to take whatever gift He sends us. He hasn’t let us down, that’s for sure. There are things that we cannot control and if we don’t trust God, I don’t know what happens. He is going to see us through and He will see our kids through. Family isn’t just something, family is everything.”

Being active in Special Olympics has helped the Kieffers understand while there may be differences, drive and desire are in the heart of every person. “Every one of those kids in Special Olympics, they will eventually get out what they want,” Brian says. “They have the same thoughts and feelings as everyone else.”

“What I’ve learned is navigating Down Syndrome is not as difficult as you think it would be,” Brian says. “It was a scary thing at first. I look back now and think, ‘What was I so scared about?’”