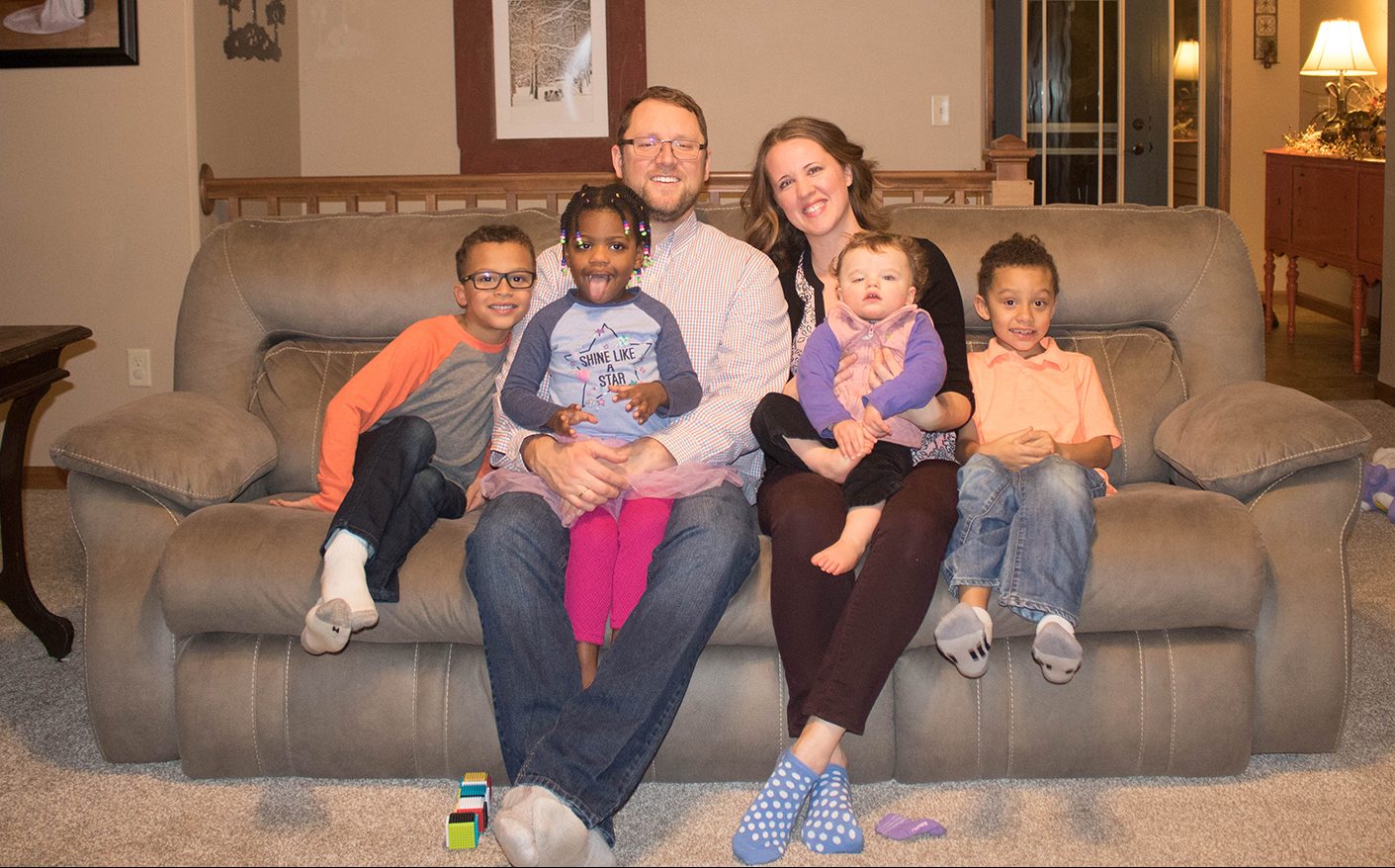 Brian and Natasha Hanneman and their children, from left, Anthony, Rayla, Savina, and Samuel
Natasha plays with twins Anthony and Samuel

The Hanneman family’s story is one of patience, perseverance and selfless devotion, anchored in Faith and unyielding trust in God’s plan for their family. Brian and Natasha Hanneman of St. Matthew Parish in Wausau have four children – twins Anthony and Samuel, 6, Rayla, 3, and one-year old Savina.

Brian and Natasha met when they were both traveling as chaperones for the 2005 World Youth Day in Cologne, Germany. “It was so funny because he was from Marshfield and I was from Wausau﷯,” Natasha says. My parents were so happy when they found out he was from Wisconsin. When we got back, we found out that both of our families had been praying for us to meet someone.” Those prayers paid off and two years later they were married and ready to start their family. 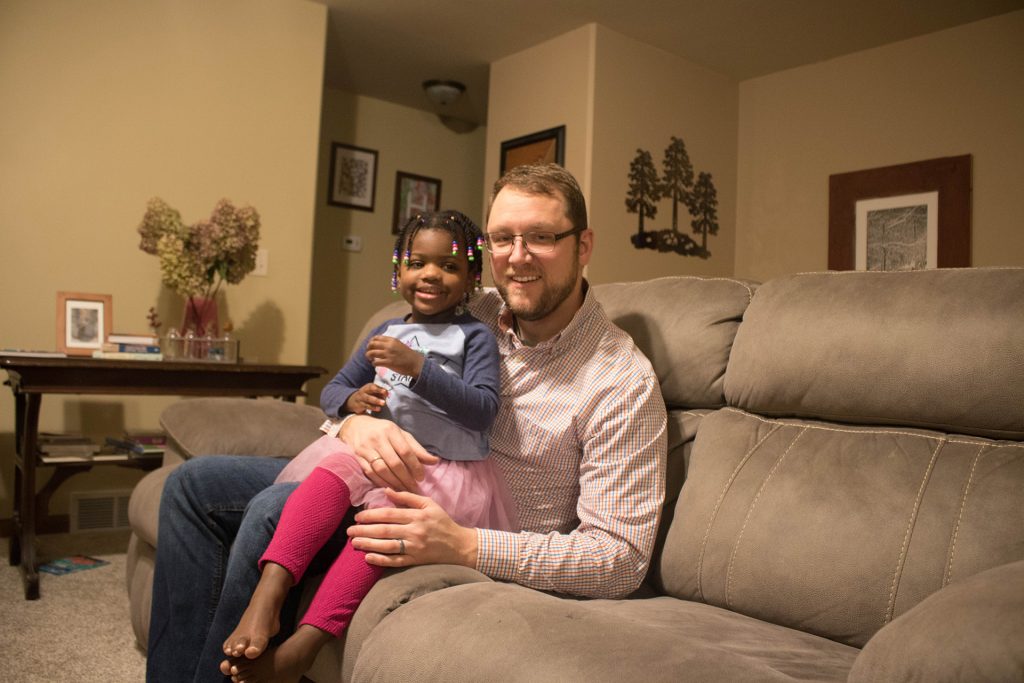 Although Natasha and Brian had a general idea of how their family would grow when they got married, God’s plan for them was different. “Initially I just thought kind of like what I was used to, like two or three kids,” Natasha begins. “We spent the first five years of our marriage trying to have a biological child.” As time went on, Natasha and Brian tried various fertility treatments without success, and the reality of their situation began to weigh them down. “It just got hard, sad, and difficult. There were moments of anger, but I think because we had a base of Faith, even if there were moments when we were angry or had a hard time and were angry with God, or didn’t understand why, we always had our Faith and each other. We knew God had us, even though we weren’t getting outcomes we wanted. You always expect to grow your family in a certain way, so we had to grieve losing the idea of how we thought we were going to grow our family.”

Brian worked hard to focus on God’s will and the Holy Mother during the most difficult times, “I prayed the rosary and really in my mind got rid of all the worldly stuff. You know, the world is saying you should do X, Y, or Z and we were just saying, ‘Okay Lord, I’m trying to use this opportunity to figure out what you want me to do.’” 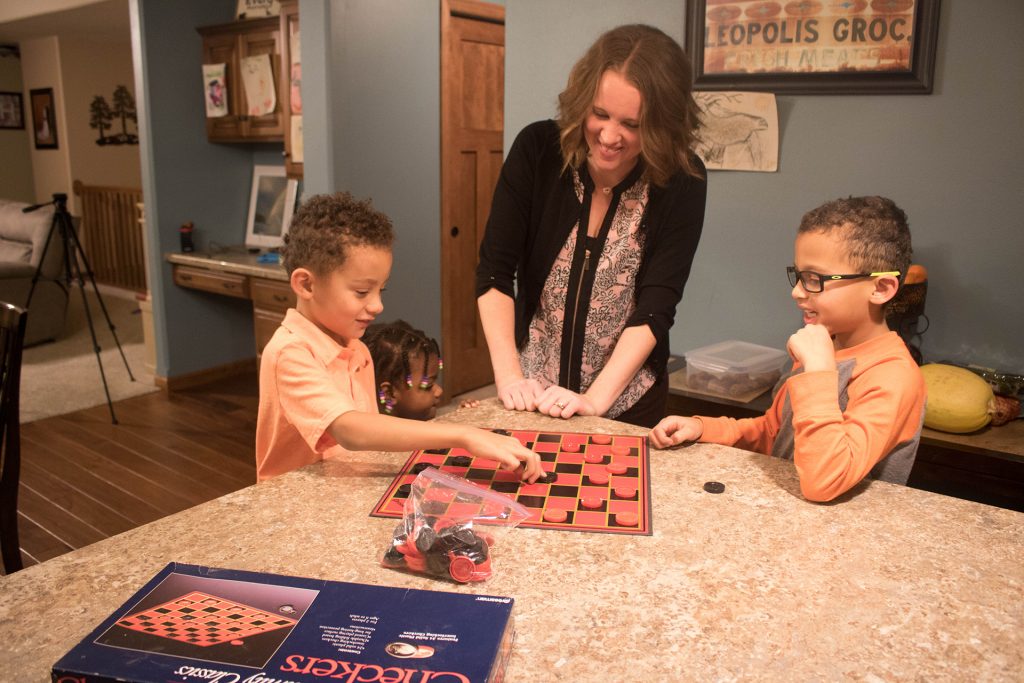 Thankfully, that sorrow would begin to transform into graces over the years as God’s will for them unfolded. Natasha sums up the dominating element of the circumstances that would take them from a family of two to a family of six: “Every time you think you made your decision, it is like God says, ‘Okay, you’ve finally settled down enough for me to do my work.’” God’s work would be evident soon.

“One day we ended up at an adoption workshop,” Natasha begins, “I remember we went in broken, sad, and really not into it. But we went and learned all about adoption. I will never forget going back to our car, looking at each other and saying ‘are you feeling what I’m feeling? We’re called to this aren’t we.’ We just left that day with a weight off our shoulders and this hope. We thought, ‘Sorry Lord, we haven’t been listening, but this is what you called us to.’ When we look back, there were some really dark, difficult times. You never know when you are in the weeds of it. But when we look back on it now, I would go through it again in a heartbeat if it meant I got these little people here because they are family and meant to be with us.”

That day, they decided to begin the adoption process and eventually it was more rewarding than they expected. “I get the call while shopping for my sister’s baby shower,” Natasha begins. “They tell me our sons were just born and they are healthy and ready for you (us) to come get them. First, I’m shocked…but did you say sons?! Then I think, this is God at work because I’m getting twin boys a month before my sister is due with twin boys. It was just amazing.”

“One day we ended up at an adoption workshop,” Natasha begins, “I remember we went in broken, sad, and really not into it. But we went and learned all about adoption. I will never forget going back to our car, looking at each other and saying ‘are you feeling what I’m feeling? We’re called to this aren’t we.’”

After bringing home their twins, Anthony and Samuel, Natasha and Brian continued to pray, looking out for what God had planned for them, always staying open to any life God brought close to them. “With every situation that came to us, whether it was a sibling group or older kids or kids with possible disabilities, I felt like we always asked, ‘Are these our kids, Lord’? We really prayed on it and tried to figure it out,” Natasha describes. Then a month before their adoption eligibility expired, along came another call; the one that would bring Rayla into their lives.

After they adopted Rayla, Natasha and Brian did not plan to adopt again. That’s when they found out God had another surprise in store for them. After years of infertility and two adoptions, Natasha was pregnant. Natasha describes, “We felt our family was a little incomplete yet, then after we adopted Rayla I knew we weren’t going to do adoption anymore. So, our family is complete now. I feel like we both still had a little yearning in our heart, but I’ve never been able to get pregnant so that would be crazy – then wham! Savina.”

Now, with four little ones, Natasha and Brian have taken on parenthood with joy and enthusiasm and continue to be open to whatever lives God may bring to them. Natasha says that during her most difficult times, “I prayed to St. Gianna and St. Gerard and (asked for) their intercession, constantly thinking that it didn’t seem to be working. But I just kept praying and now when I look back, it totally wasn’t working in the way I thought it should work. It was working in the way it was supposed to work. And that is how it is with so many things in life. It’s not going your way so you think God’s not hearing you, but of course He is. He’s just directing you on the right path.”

Story and Photography by Ben Williams