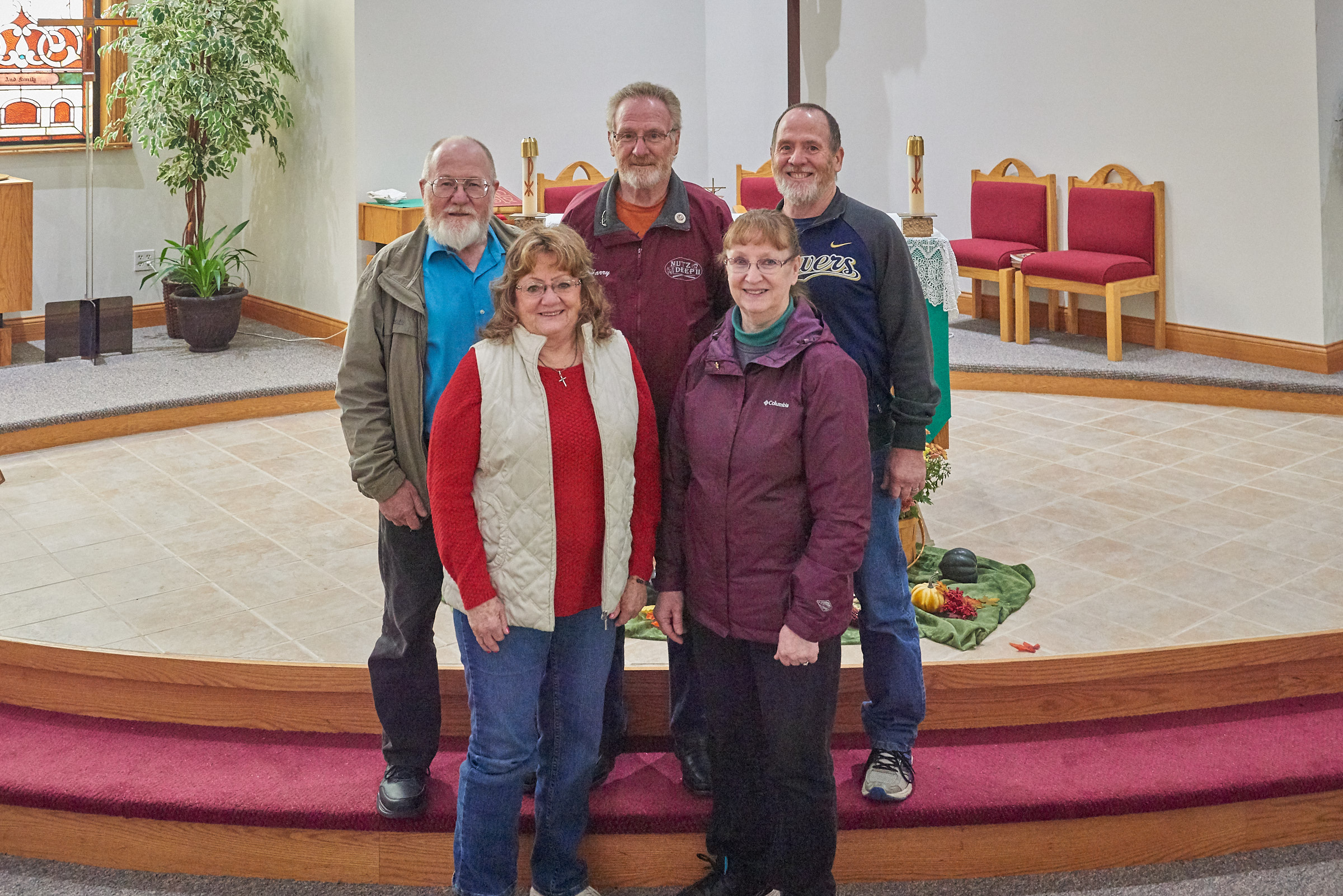 The Jonases: in front from left, Beatrice and Liz; in the rear from the left, Mike, Harry and Ray pose in front of the altar inside Corpus Christi Church.

The Jonas family of Bakerville and One’s Inner Voice

Irene and John Jonas raised five children — Mike, Ray, Harry, Liz and Beatrice — in the tiny hamlet of Bakerville near Marshfield. Their home was across the street from Corpus Christi Church, which stands like a sentinel on top a hill overlooking the farming countryside at the intersection of county highways B and BB. They understood, appreciated, and were thankful for being a part of a parish community that gathered in that church, that sacred place, to celebrate the Eucharist and all the Sacraments. 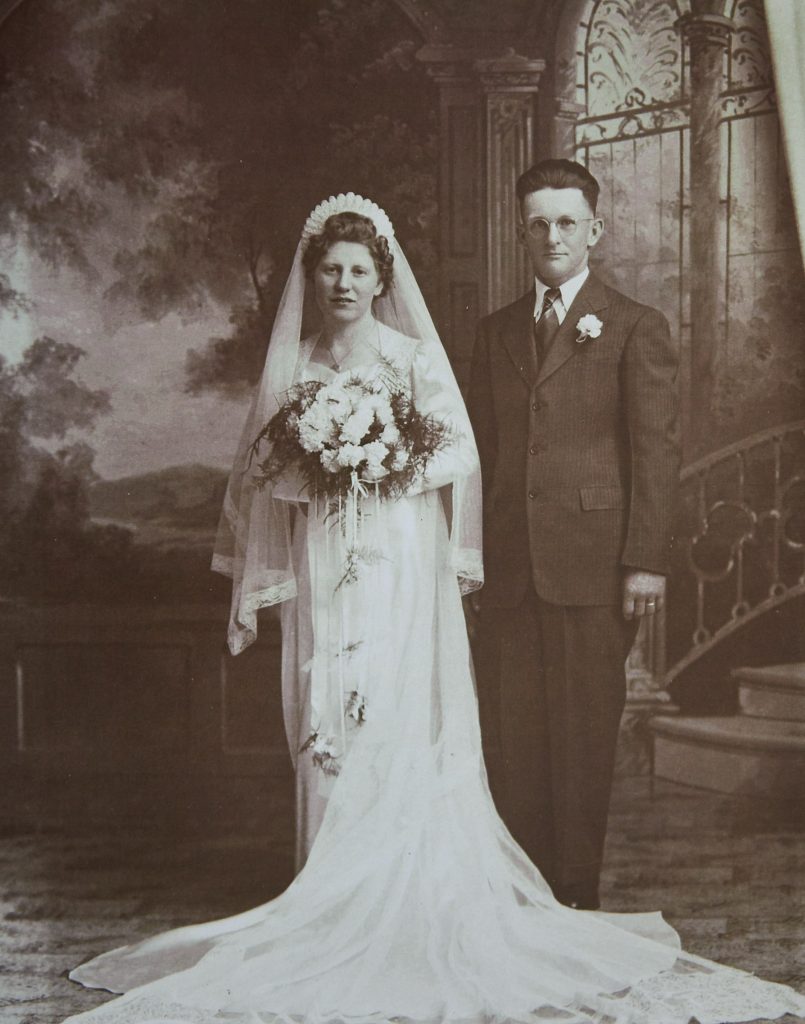 Irene and John have since passed on and their children remember their parents as being extremely devoted to our Lord and God in not only what they said, but how they lived their lives – lives that served as an example to Mike, Ray, Harry, Liz and Beatrice. In one instance Mike recalled, “Every Lent, after supper we would all kneel down either in the kitchen or living room and say the rosary as a family each day of Lent.” Liz added, “And also during the month of October because it was holy rosary month. We did this as far back as I can remember.” Mike said, “Dad prayed his rosary so often over the years that he wore it out. It would break, and he would put it back together again. When the metal turned color and faded because it was used so much, we took it to the store to be fixed. However, instead of repairing it they gave us a new one and said they never before in their life had ever seen a rosary used so much.” Beatrice related another time of prayer, “Dad would be reclining in his davenport and we would kneel down to say our evening prayers.”

Prayer life, that is, communicating with God, is important for our spiritual health. It is through prayer that the Holy Spirit comes to us, an inner voice. Some might say it is our conscience speaking to us as we contemplate decisions we need to make in our daily lives. Through our Baptism﷯ and Confirmation, the Holy Spirit gives us the Gift of Understanding: comprehending how we need to live as a follower, a disciple of Jesus Christ. We can all have this gift if we seek the Holy Spirit as we pray. Fortunately, prayer can be done anywhere at any time. Reciting the holy﷯ rosary was the Jonases’ custom, during Mass with the parish community, praying in silence at Eucharistic﷯ Adoration, morning and evening prayer at the beginning and end of each day, and in the presence of nature in solitary prayer as Jesus often did as He went into the desert.

“We collected flowers, stretched linens, dusted the altars, mowed lawns, and so forth because it just was the right thing to do.”

Things done out of love of God and neighbor are the consequence of the Holy Spirit’s Gift of Understanding. Liz said, “What I remember [as a child] is that every Saturday Mom did the flowers for the altars and in the summertime, we’d go around the neighborhood and collect the flowers and she would do the arrangements. She [her mom] always said, ‘this isn’t for us, it’s for God.’ I also remember in the summertime stretching the altar linens because the nuns who used to do that were gone at that time.” 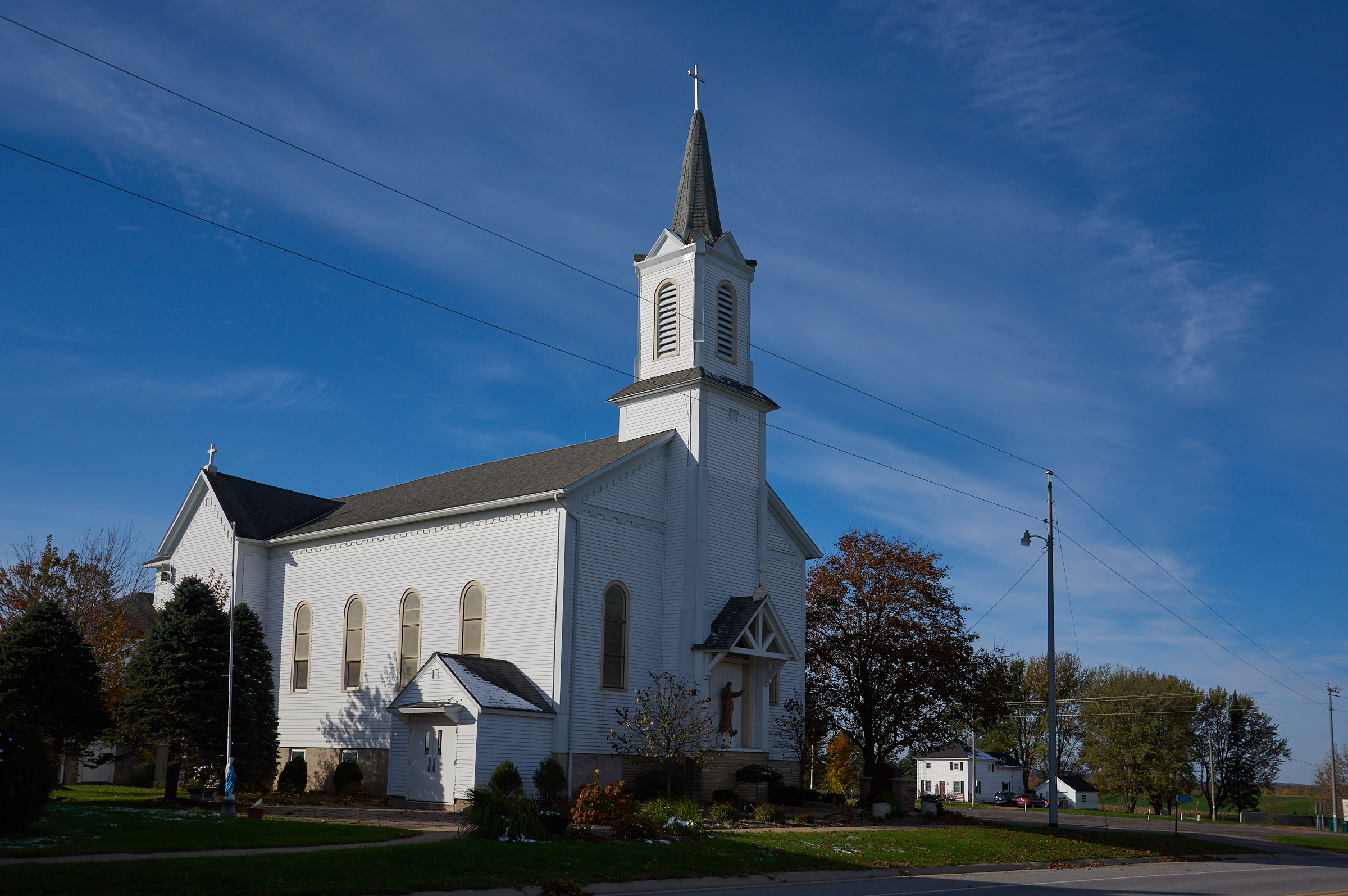 Corpus Christi Church stands on the corner of County Hwy B and BB. The Jonases’ house is visible in the lower right.

“Our [the boys] job in the summertime,” said Mike, “was to mow the lawn – with a push mower. And my dad was very particular about how it was to be mowed: first one way then the other. If it was not done right, we would do it again. Harry and I also did the cemetery.” Beatrice added, “We collected flowers, stretched linens, dusted the altars, mowed lawns, and so forth because [we knew] it just was the right thing to do.

When asked if they did things they really did not want to do, Beatrice related how difficult it was to care for her mother near the end of her life. As young boys, Mike, Ray and Harry remembered how, at the request of their parents, they would help an old woman who lived in a house nearby who had two apple trees and wanted apples that had fallen from the trees picked up off her lawn. Mike confessed, “I hated doing that job, but I did it.” Beatrice, Mike, Ray and Harry could have refused to do these things. Asked why they did do it they answered, “it was the right thing to do.”

Neighbors helping neighbors. If someone was in need, the Jonases were there to help. The inner voice kept saying it is the right thing to do. Perhaps, just perhaps, this inner voice is the Gift of the Holy Spirit – of Understanding – at work in the Jonases and in us.