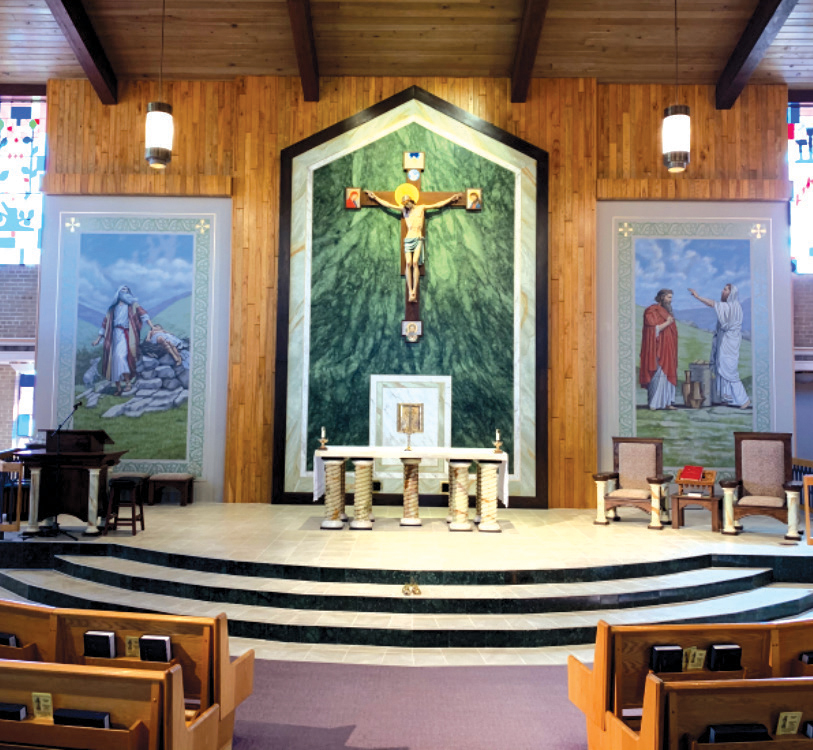 The new sanctuary at St. Patrick Church in Onalaska incorporates the theology of covenant and sacrifice. To the right, one sees the picture of the priest Melchizedek giving the blessing to Abram. The symbol of the covenant is the offering of the bread and wine. To the left, we see the sacrifice of Abraham, our father in Faith. We realize from the story that it is not Abraham who provides the sacrifice but it is God. For God provided the ram instead of Isaac; just as God provided His son to be sacrificed for the salvation of the world. Thus Abraham and Melchizedek are both looking upon the cross of Christ—for the true sacrifice and the new covenant are found in the cross of Christ. Both of these scenes are mentioned in the Roman Canon.

The new crucifix, handcrafted in Italy, depicts the Trinity. At the very top, we see the hand of God the Father, followed by the Holy Spirit represented by a dove. Central to the crucifix is the Son of God depicted in the sacrificial manner. Seeing that “one does not look upon the face of God and live,” God is usually depicted as a hand, which represents His hand in creation. Thus, it is the hand of God who points to the salvation that is won for us by His Son on the cross. The icon on the right of the cross beam is of the Sorrowful Mother and St. John is on the left—for it was they who stood by Christ as He offered Himself on the cross. At the base of the cross is St. Patrick—the patron of the church.

The new ambo and presidential chair are made of dark wood, matching the dark wooden arches in the church. The legs are painted in a manner to match the onyx altar, which is unique to this area. The altar was acquired by Father Joseph Bach and was brought back to the states from Guadalupe, Mexico.