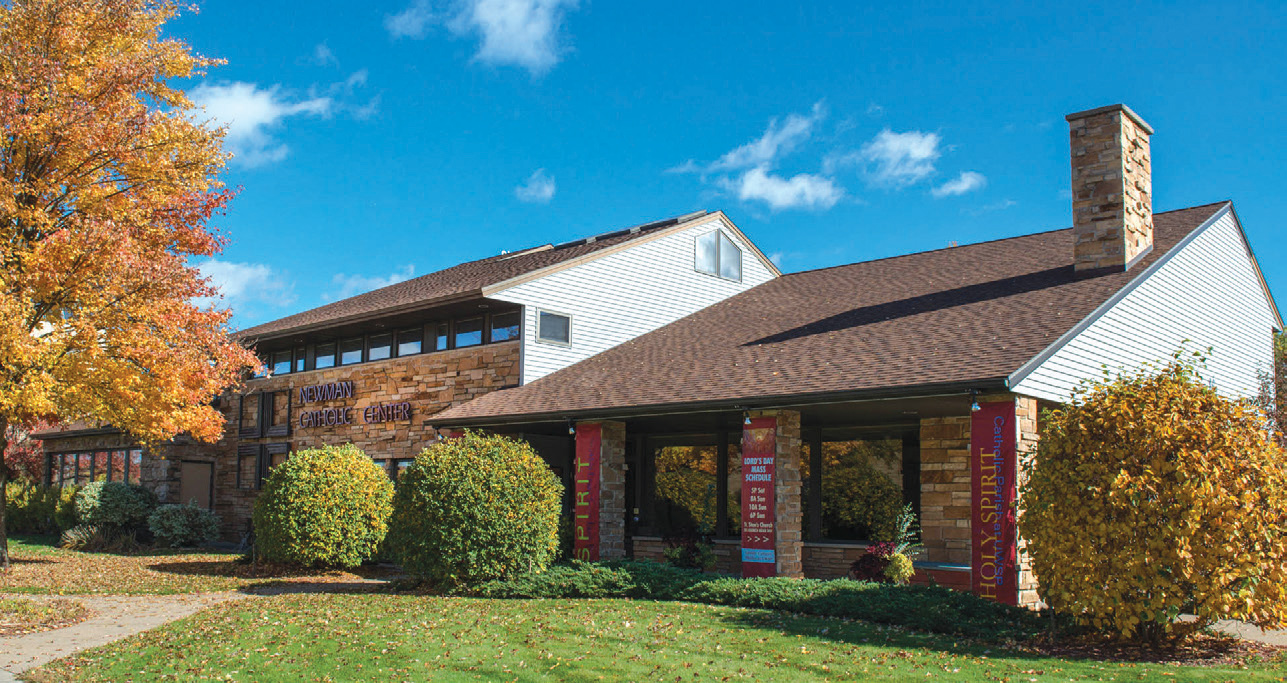 Throughout its history, Newman University Parish and its campus ministry outreach offered opportunities for students to become disciples of Jesus. Joining with St. Stanislaus Kostka in 2015 to become Holy Spirit Parish has not diminished service to UW-Stevens Point students. During semester breaks, parishioners support students who wish to reach out to communities in need. Mission trips to such places as the Catholic Worker House in Chicago, the poor in the Appalachian Mountains in Kentucky or Habitat for Humanity projects in Alabama give students a more global vision of the Church, especially of the poorest among us. What started from a desire of Catholic students to gather for religious activities has today grown into a thriving campus ministry.

Starting in 1915, a group of Catholic students known as the Loyola Club on the campus of Stevens Point, Normal School, the precursor of UW-Stevens Point, would get together for religious activities. Annually, they performed charitable works and learned more about their Faith from speakers and various conventions. One could say this was the foundation of the Newman University Parish.

The Newman House, purchased in 1958, provided a place for the Catholic students to hold discussions and enjoy recreation time together. They attended Mass at St. Stanislaus Church and prayed the rosary several mornings a week. In 1970, the Newman University Parish was established by Bishop Frederick Freking with a mission “to offer UW-Stevens Point students an opportunity to develop their life in Christ in a supportive Catholic Faith community made up of students, faculty, staff and local residents. We who are members of that community share in the mission of Jesus–by proclaiming the Good News of God in word and action–by celebrating God’s presence in the sacraments–and serving God’s children in building a just world.” He appointed Father James Lovejoy, Father Vaughn Brockman and Father Bill Jablonske as co-pastors of the new parish.

Roseann DeBot, a parish member from its very beginning, recalls, “Families [of the parish] were very resourceful. When our children were of age to receive the sacraments, every parent had a role to play in their preparation.” Roseann was instrumental in founding Operation Bootstrap, a social service agency in Stevens Point, which began in 1969.

Another early parishioner, Ruth Kulas, a lay minister and leader of prayer, began a community outreach ministry for senior citizens, which continues to this day. As part of this ministry, she holds communion services at the Portage County Nursing Home and at other assisted living facilities. Ruth says, “The residents are so grateful. There is always a time at the end of communion services for a ‘thank you.’”

The Newman University Parish underwent several changes and expansions. In the beginning, the parish lacked a dedicated worship space. From 1970 until 1983, the parish worshiped in Kostka Hall, located in the basement of St. Stanislaus Church. Later, they gathered for Mass in the Chapel of the Convent of the Sisters of St. Joseph, Third Order of St. Francis. Then in 1975, a Newman Center building was constructed on the UW-Stevens Point campus about 800 feet northwest of St. Stanislaus Church. The center provided a small chapel and gathering space for college students.

The Newman University Parish, now Holy Spirit Parish, has served students of UW-Stevens Point for many years. As times have changed, one thing has remained: the unwavering generosity and commitment to bringing the Gospel of Jesus Christ to the UW-Stevens Point students.

Story by Pat Trebatoski, parishioner of Holy Spirit Parish in Stevens Point
Published in the July/August 2020 issue of Catholic Life