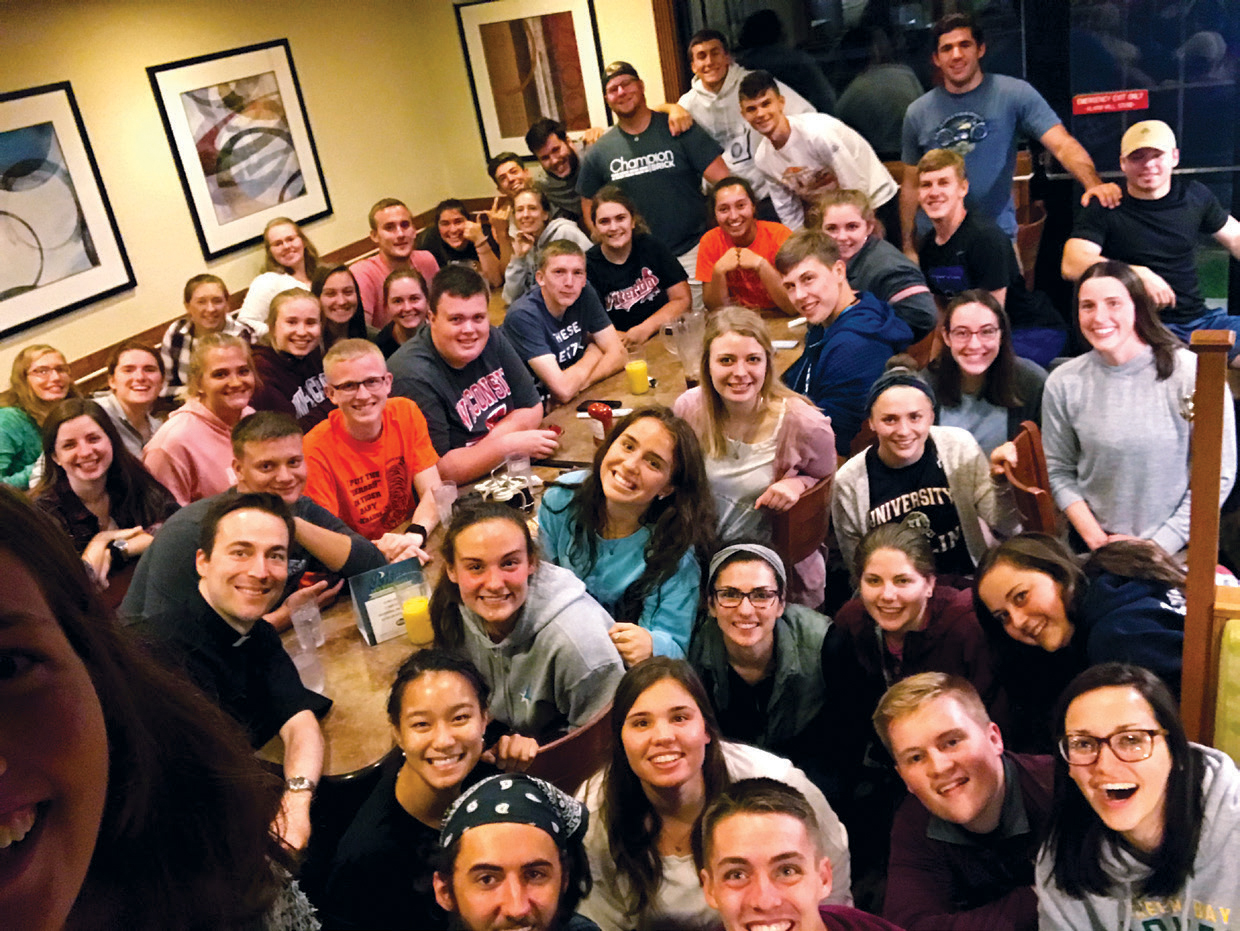 The future of society is in the hands of our youth. This can be traced back to the beginning of time. Knowing this, we teach our children family traditions and beliefs to be passed on to the next generation. With peer pressure and worldly influences, educating children to be disciples of their Catholic Faith can be difficult.

Almost 80 percent of those who leave the Catholic Faith do so by age 23, reported Pew Research in 2009. This signifies the importance of faith formation for teenagers and college students. Two organizations cater to these age groups, not only by teaching the Faith and discipleship but also serving as home to amazing missionaries who make up these groups.

FOCUS (Fellowship of Catholic University Students) is a Catholic collegiate outreach whose mission is to share the hope and joy of the Gospel with college and university students, inspiring and equipping them for a lifetime of Christ-centered evangelization, discipleship and friendships in which they lead others to do the same. The missionaries who lead FOCUS are usually recent college graduates who received a calling to minister on-campus because of their experience with FOCUS as a student.

NET Ministries (National Evangelization Teams) is a Catholic organization dedicated to spreading the Gospel message to youth. Teams of missionaries, ages 18-38, travel the country for nine months holding retreats for middle and high school students spanning from a few hours to several days. Topics range from confirmation and catechumenal preparation to lifelong faith formation studies. There are 170 NET missionaries, in teams of 8-12, who will travel the United States this year.

The missionaries of FOCUS and NET Ministries speak volumes for each organization’s influence on young adults.

Traveling with the Team

Braedon Hoecherl was raised in Bloomer and attended St. Paul Catholic School for grades 1-8. After graduating from Bloomer High School in 2019, he joined NET Ministries. “I wasn’t sure what I wanted to do after high school and wanted to take a year off before enrolling in college,” said Braedon. “I knew I wanted to do something with my Faith and how important that was to me. I also felt a desire to help other young people grow in theirs.”

He was raised in a Catholic family and attended Catholic retreats throughout middle and high school. “I first heard of NET at a Steubenville retreat in St. Paul,” he said. “Knowing how much retreats helped me grow and build my Faith I decided to check NET out further. I had never been on a NET retreat prior to joining NET.”

After graduation, Braedon began a nine-month commitment to NET. Training began in August and he was then placed on a team and traveled as a missionary throughout 12 states for the next several months. Missionaries are expected to raise enough money to cover their travel costs, so his journey with NET began months before.

Upon arrival at each destination, the missionaries made contact with the person or parish who organized the retreat and then met their host families. The group was split, depending on how many people each host family could handle. “It was a really cool experience to be welcomed into so many different homes and families.”

A typical retreat includes a large group presentation, followed by small groups discussion and prayer. Themes include Fully Alive, Anchored in Hope and Gifts of the Holy Spirit, among others.

“NET Ministries focuses on the simple truths of our Faith,” said Braedon. “Each young person we encounter is loved by God and we invite them to enter into a relationship with Him. That’s the main thing we want them to get out of the retreat.”

This journey helped Braedon grow in relationship with his team. “Because we traveled around the country in a van and spent so much time together,” he said, “we became like a family. I gained some great friends and we were able to help each other grow in Faith. It was nice to be part of a group that could focus on that.”

I wanted to do something with my Faith and felt a desire to help others grow in theirs.”

Braedon said, “It isn’t easy being on retreats all the time and away from home. Being challenged is God’s way of asking us to grow. But if you really want to strengthen your Faith, want to be challenged, and experience God work in your life in amazing ways, then NET is definitely a good thing.

“I grew a lot in my Faith. I knew my Faith was particularly important to me before joining NET. This past year showed me how important it is to live our Faith in everyday ways.”

Braedon will be attending St. Mary’s University of Minnesota this fall, majoring in music production.

Terry Bell is the FOCUS team director at UW-La Crosse. “College age is a pivotal time in someone’s life,” said Terry. “Students ask, ‘I’m not home anymore, what am I going to do? What direction is my life going to take?’ We reinforce and build on what they learned at home or in Catholic schools.”

At the core of FOCUS is small group Bible study and discipleship programs working together with Campus Ministry. “We seek out and bring people to our events,” said Terry. “We try to meet as many students as we can and welcome them to the Catholic community. As they encounter God, we give them a consistent way to grow in their Faith.”

Based out of Roncalli Newman Parish in La Crosse, Terry and two or three other missionaries connect with students by interacting with them on campus by doing things like playing volleyball or basketball or spending time at the student union to meet people. This past school year, 215 students were involved with Bible study and more than 60 in discipleship.

Terry took a somewhat unconventional path to FOCUS. “I wasn’t raised in any faith,” said Terry. “After I had a really powerful encounter with God at age 19, I found myself at a Catholic Mass and heard a Gospel about the Good News for the first time. Because I didn’t have any formation, I was scooped up by an evangelical Christian. Through a number of questions and circumstances, God led me back to the Catholic Church and the Eucharist.”

After active duty military service for nine years, and now married with four daughters, Terry began studies for theology and catechesis at Franciscan University in Steubenville, Ohio. He said, “While there, my desire to teach people about Our Lord, evangelize and help people find Christ grew.”

One day, he was praying and heard God ask him to become a missionary. “I told God he’s going to need to show me what that looks like because I’m a married man. It was a very clear call. Twenty minutes later, I was talking to someone about FOCUS.”

Students ask, ‘I’m not home anymore, what am I going to do? What direction is my life going to take?’”

From there, Terry followed the path to become the FOCUS team director at UW-L, where God calls him to the youth. “They’re at a pivotal age where they’re choosing which direction to go in life,” he said. “To be part of that and to help them invite God into the decision making process is really important. College students are very thirsty for God. It’s a privilege to serve this particular community.”

Rachel Mazurek became a FOCUS missionary at UW-L in 2019. Originally from Bessemer, Mich., she graduated from UW-Oshkosh with a degree in psychology. Her first experience with FOCUS started with cookies.

“At UW-Oshkosh, I signed up for Bible study because I knew it would be good for me and I wanted to make friends,” said Rachel. “The girl who ran the Bible study made really good cookies. I started to attend every week because I liked her cookies.”

This led to Rachel being invited on a FOCUS mission trip to Rome, Italy. The pilgrimage-based trip is what got Rachel engaged with FOCUS. It was her first real exposure to FOCUS beyond Bible study.

“I didn’t know anyone on the trip except the leader,” said Rachel. “But she was in charge of the trip, so I didn’t have a lot of time to hang out with her. I was so impacted by how people who didn’t know me were so welcoming like they knew me my entire life. They were so friendly and showed me the way Jesus loves us. I’d never experienced that before.

“Going to Rome brought me to the Faith on my own accord. I realized this is the core of my Faith and my responsibility to pass it on to others. Coming back to campus I was on fire. I needed to share this experience with others.”

She continued with FOCUS Bible study and discipleship. Upon graduation, Rachel intended on applying to grad school. However, God called her to become a FOCUS missionary instead.

“Every day I wake up and go to the Newman Center, knowing the work I do is making an impact,” said Rachel. “Jesus is working through me to help others come closer to Christ. Knowing that what I’m doing is meaningful in this life and also in the salvation of souls; knowing that the work I’m doing is not my work, but God’s work, makes it all worth it.

“We know from our Faith that looking for instant satisfaction in the here and now isn’t going to give us lasting peace and happiness. It’s a definite challenge to get them to shift their perspective. It’s hard for students to do this by themselves. That’s why we’re here to walk with them.”

Though graduate school is on hold, Rachel said, “I never anticipated doing mission work, but it’s definitely the best decision I’ve made in my entire life.”

If you would like to support the missions of FOCUS or NET Ministries, please go to their websites for more information: focus.org and netusa.org.