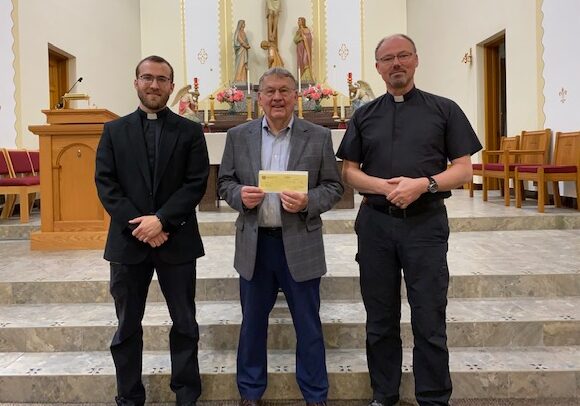 Catholic Order of Foresters (COF) General Agent Roger Klein of Arcadia earned a Richard Benevolence Tobin Award! He has chosen to donate the $500 associated with the award to the Hosea Initiative at Holy Family Parish in Arcadia. This organization has a mission to support the pro-life movement by educating Americans about the deception of pro-abortion advocates. “Because I am firmly pro-life,” Klein explains, “I chose the Hosea initiative [to receive the funds] and hope to bring clarity about the evil of abortion and the sanctity of life.”

Catholic Order of Foresters’ top 20 agents earned Richard Tobin Benevolence Awards, worth $500 each, based on production year 2019. COF donates the money to the church, school or community organization of each agent’s choice. These awards are made possible through COF’s Welfare and Relief Fund. The late High Chief Ranger Richard Tobin established this fund to allocate money for fraternal good.

Established in 1883, COF is a not-for-profit Catholic life insurance society helping members achieve financial security while supporting the Catholic community through spiritual, social and community service projects, which it identifies as fraternal outreach. It is headquartered in Naperville, Ill., and has more than 100,000 members nationwide. COF is licensed in 32 states and Washington, D.C. For more information, visit catholicforester.org, or connect with COF on social media.