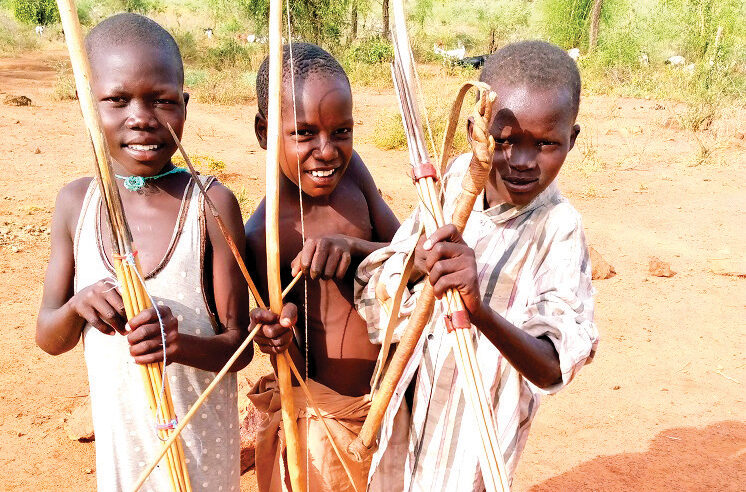 As a teenager, Stevens Point native Gabe Hurrish had career aspirations similar to those of other kids growing up in Wisconsin: he dreamed of being a football coach. But he found himself dreaming bigger dreams as he heard accounts from his uncle, a Franciscan Third Order Regular priest, who was serving as a missionary in India and Brazil.  “His stories inspired me,” Gabe says.

“My family life was a typical Midwestern, rural, middle-income upbringing,” Gabe remembers. “My parents were simple, hard-working, honest and faith-filled and instilled those values in their five children. I thought the whole world was white, Polish and Catholic, until I went off to college. I was rather insulated from the world at large until I left central Wisconsin.”

Gabe majored in health education and school health administration at the University of Dayton, Ohio. But stories of his uncle’s 33 years of missionary work intrigued him. “I always wanted to sell my possessions and go and live with him,” Gabe admits. His uncle was reassigned to the United States just before Gabe graduated from college. “I guess that unfulfilled desire to travel and work in mission stayed with me over the years until I joined the Peace Corps in 1984 and went overseas for the first time,” he says. “I was hooked.”

Since then, Gabe has lived and worked overseas in several different relief, development and mission organizations for more than 27 combined years in 10 countries, many in Africa. “My one-year stint in Sudan in 1988 was the worst experience of my life,” Gabe remembers. “This was a very difficult situation assisting refugees in the desert, and the politics was not easy. I was young, inexperienced and hopelessly over my head. Nothing went right. It seemed I had to deal with a crisis every day. Years later, I can look back and also say it was the best year of my life. It was in that year I learned to pray and rely upon God’s Providence. I learned I had an inner strength I could draw on.”

Gabe’s travels throughout the years have gifted him with friends from all over the world. “I seem to get along with most people in most countries: young and old, men and women, rich and poor, Christian, Muslim, Jew, and even atheists,” Gabe says. “Yet, strangely, I have become a bit philosophically estranged in my own country. Few have had the experiences I have had. They are good people, but just are not interested in the world around them.”

Having vast life experiences has naturally made Gabe more relaxed and accepting of different viewpoints and opinions. “I try to base all my discussions with the life of Jesus in mind because His teachings are my life foundation,” he explains. “Most people are not comfortable with others who have differing or even conflicting viewpoints, but I have learned that people are people all over the world and we can still enter into dialogue and try to find common ground. I tend toward more compassion than judgement.”

“I try to base all my discussions with the life of Jesus in mind because His teachings are my life foundation.”

In 2010, Gabe returned to the United States when his younger brother passed away unexpectedly. “After 33 years away from home, I returned to be with my parents,” Gabe says. “My father passed away shortly thereafter.” He decided to stay in the United States to be with his mother. Father John Potaczek, a friend of Gabe’s and then-pastor of St. Stephen Parish in Stevens Point, offered him the position of part-time coordinator of religious education. “I took the position, as it filled my desire to stay close to the Church and its people,” Gabe remembers. “I enjoyed the work very much and especially liked the people.”

Four years ago, Gabe felt the pull to return to his work overseas for multiple reasons. “First, my family situation had stabilized, and I was more relaxed about leaving my mother,” Gabe says. “Secondly,  I did not seem to fit in the America culture anymore. I feel much more myself when I am overseas, especially with the poor. Thirdly, through my meditations, I felt the urgings of the Holy Spirit to again return to Africa. I am not sure if this was self-fulfillment of my own wishes and desires, but I have had these feelings before.”

From June to August of 2016, Gabe volunteered as a professor in South Sudan at the Solidarity Teacher Training College in Yambio. From this, he returned 18 months later to serve as a Maryknoll Lay Missioner in South Sudan. “I wanted to simply work with the poor in a Christian setting with like-minded people,” he says. “I had known of the Maryknoll Lay Missioners for a long time. I felt I would be energized by a group of people who are dedicated to the building up of the Kingdom of God and are not afraid to venture out of comfort zones and simply trust in the Lord. Being a part of such a group would make me a stronger and more responsible Christian.”

In August 2019, Gabe was transferred to Juba, the capital and largest city of South Sudan, where he serves as project officer for Solidarity. He also manages their guest house. “I live where I work and this makes life a bit challenging, as there can be some very long hours and days,” Gabe says. “Juba is a difficult city to live in, as it has few amenities.

“You know, I have been all over the world and only a few times did I go to a place I actually wanted to go to,” Gabe reflects. “I felt a quiet urging that sort of guided me to the many places I have been. It was only in retrospect that I realize the Holy Spirit led me to these experiences for Divine reasons. I spend a great deal of time alone with God trying to open myself to His will and trying to discern what He asks of me at the moment. I have found that I am closest to My Lord when I am in a desperate situation such as Africa or other places. I want to continue a simple lifestyle so I can dedicate myself to the service of others.”

Gabe says you don’t have to travel to Africa to help those in need. “Poor are everywhere. Needy are everywhere. Sick are everywhere. If you feel the call, go out and find places to volunteer,” he recommends. “The best medicine for depression is helping others. It may only be holding a hand, washing dishes, buying groceries for a home bound person or just listening. This is true missionary work. You ask anywhere to volunteer and you will find endless needs.”

“Seek not the things of this world but seek ye first to build up the kingdom of God, and to establish his righteousness …” (Mt 6:38)