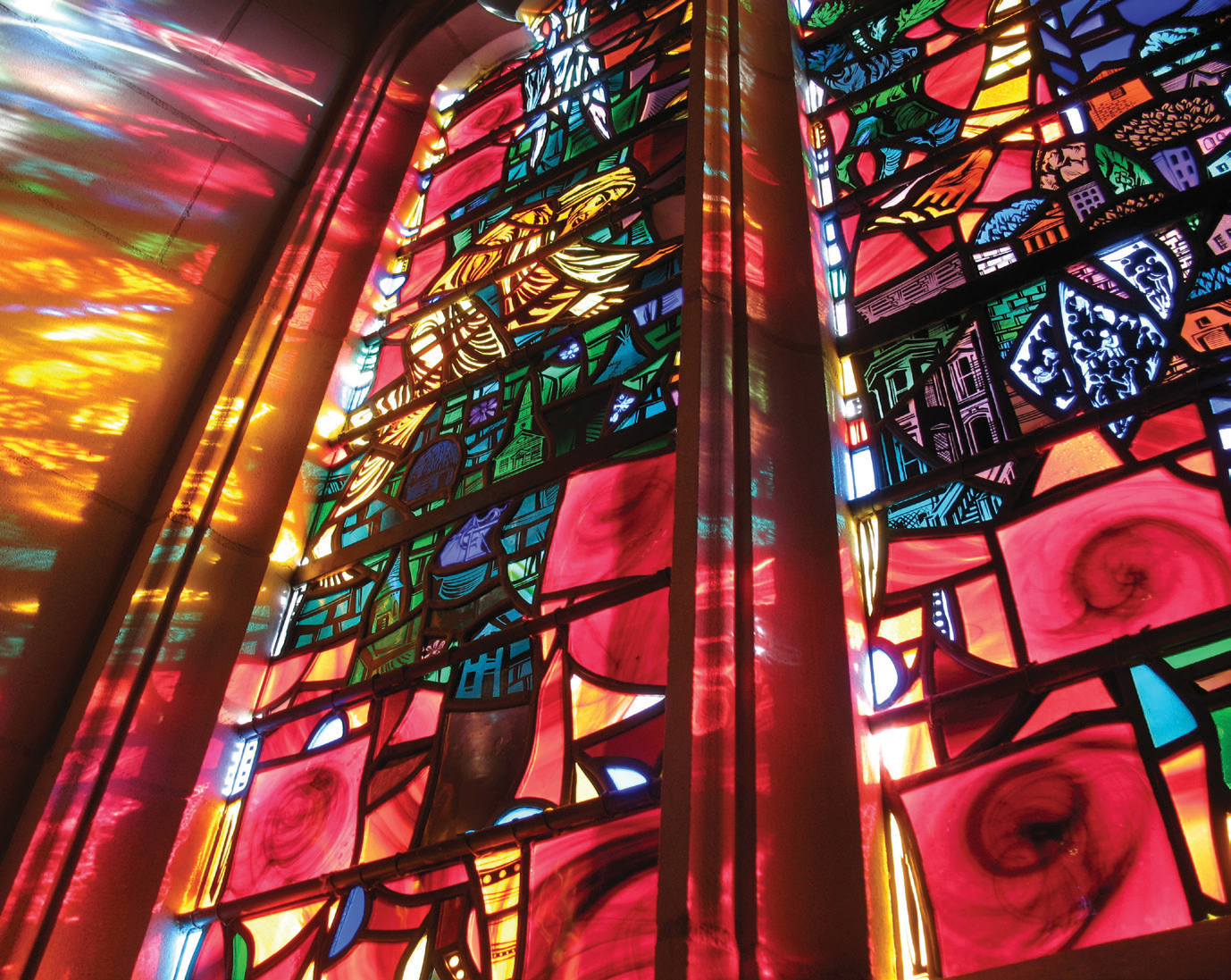 You know the story: In the beginning, God made a perfectly ordered world, with Adam and Eve at its visible center, made in His image and likeness. But then things got ugly. Our parents turned away from the source of beauty and into themselves; as a result, they effaced the divine image and lost eternal life. Chaos ensued. The end.

Or the end of the beginning, anyway ….

What followed was (and is) basically a world-wide beautification project. The Holy Spirit, whom the Catechism of the Catholic Church calls the “artisan of God’s masterpieces” (CCC #1091 and #741), rebuilds a fallen world and its fallen humanity after the pattern of the perfect man—Jesus. If we have paid attention in Catholic school or catechism class, we know that our reflection of the Redeemer returns and grows through the sacraments of initiation—baptism, confirmation and the Eucharist. Those who regain the lost image of God most perfectly are called saints. What we may not know is that the fallen, material world is similarly restored through a kind of baptism, confirmation and Eucharist. Nature’s stones, wood, metals and other materials taking particular form through human effort as buildings are also “initiated”—at which point they are called churches. The ritual that celebrates their divine restoration is the Order for the Dedication of a Church and an Altar.

On July 26, 2020, some of the faithful of the Diocese of La Crosse were privileged—and blessed—to witness the celebration of this rite at St. Philip Church in Rolling Ground. What follows is a sacramental look at this rite and how it served as an initiation for a newly renovated country church located in the southern part of the diocese.

Before a church or its altar comes to life as a divine image of Christ, each of these human, material objects is as mundane as any other building or table. So when the diocesan bishop—who is the ordinary minister of adult initiation—arrives, he ignores the “altar” and walks immediately to his chair during the entrance procession. After all, if the soon-to-be-but-not-quite-yet-initiated altar is at this point not significantly different from any other table, why would he bow to it or kiss it? In fact, at this, the beginning of the ritual, the altar stands naked: no cloths, no candles, no flowers adorning it.

But then a remarkable thing happens: the bishop blesses holy water, and then he sprinkles it on the people (who are called the Church’s “living stones”), the walls of the church building and the altar. Much as that first creation emerged from the waters (Gn 1:1)—and not unlike our own rebirth from the baptismal font—the church and its altar begin their supernatural genesis from water.

After the sprinkling of holy water during the Mass’ introductory rites, the Liturgy of the Word follows. But this doesn’t mean that the church is now fully initiated. Like the “living stones,” God’s people, whom the church building represents, the building’s baptism is “confirmed” with sacred chrism.

As with the sprinkling, the anointing with chrism starts on the altar. The bishop (maybe even the same bishop who confirmed you) goes to the altar and pours chrism on the four corners and center of the altar’s top, evoking the five wounds of Christ, whose image the altar is becoming. The bishop then anoints with his hand the entire altar top.

After the altar’s anointing, the bishop or one of his concelebrants anoints the walls of the church building. Before the Mass began, 12 crosses were added to the inside walls of the church, symbolic of the Twelve Apostles, who are the foundation stones of the heavenly Jerusalem (if necessary, only four crosses may be erected). The bishop or priest anoints these crosses, confirming, strengthening and dedicating the building as a living image of Christ.

A few additional rites are necessary before the church’s initiation is complete. First, the chrism is wiped from the altar—along with the incense that was also burned upon it, signifying how our “prayers rise like incense” (Ps 141:2) before God. Washed clean with water and confirmed with sacred chrism, the altar is now covered with a white cloth (other colors are not permitted), much as the newly baptized member of the Church dons an alb (from the Latin albus, “white”). Second, like this newly vested neophyte who receives a lit baptismal candle, the altar’s candles are solemnly lit for the first time. At the same time, the church building also receives special candles that are mounted and lit beneath the dedication crosses. Finally, the bishop performs that gesture he had omitted at the start of the Mass—he approaches the altar and kisses it, signaling that it is becoming the presence of Jesus.

But as significant as these elements are—the vesting, the lighting and the kissing—the most important rite for the church and its altar now begins: the celebration of the Eucharist. Here, again, we witness a remarkable parallel between the initiation of a person and the “initiation” of a church: both complete their sacramental conformity to Christ in the reception of their first holy Communion. When referring to the altar, which beats as the heart of the building, the Order for the Dedication of a Church and Altar cites St. John Chrysostom on the point: “This altar is an object of wonder: by nature, it is stone, but it is made holy after it receives the Body of Christ.” There exists no greater transformative force on earth than the Eucharist, for it has the power to change any worthy recipient—be it a person or an altar—into Christ.

Men and women become saints by actualizing in the world their baptism, confirmation, and eucharistic reception. Buildings become churches by a similar sprinkling with holy water, anointing with sacred chrism and receiving and giving the Eucharistic Christ. The parallels are striking, but they shouldn’t be altogether surprising to those who profess a sacramental Faith. For Christ is the model for both His churches and His saints. Recall these sacramental similarities the next time you go to your parish church: you, your church and your Savior are all restored images of God’s own beauty.

(These images were taken at St. Philip Church, Rolling Ground, on the day of its rededication.)

Christopher Carstens
Director of the Office for Sacred Worship