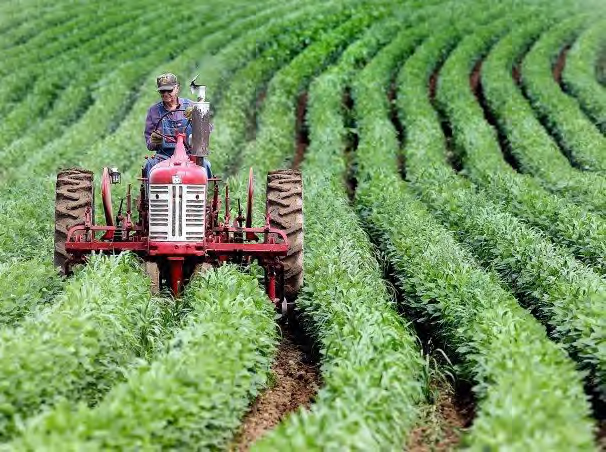 The life of a farmer is one filled with faith. Faith that crops sown will reap a strong harvest. Faith that God’s creation will provide. Faith in the constant presence of God to persevere through life’s uncertainties. Perched on the top of the hill in Middle Ridge sits St. Peter Catholic Church, lovingly referred to by parishioners as the “Jewel on the Hill.” The rolling hills beneath the church are home to many farms and families who have comprised the community there for decades.

Arnold “Arnie” Hundt has been involved at St. Peter’s since the day of his baptism on Dec. 8, 1928. He and his twin sister Arlene were born to Peter and Mary Hundt, just half a mile from the parish on their family farm, and are the youngest of 14 children. Their community and lives were nestled into the coulees surrounding the “Jewel on the Hill.” “How I got involved in the Church? Well, my parents of course! It was their no. 1 priority,” Arnie said with a chuckle.

Much like a farmer tends to his fields, Mary and Peter tended to their children, raising them in Faith and watching them grow. Every day, Peter worked on the farm, and Mary “Ma” walked the children up the hill to school at St. Peter. After dropping them off, Ma went to Mass every single day, setting an example of enduring Faith for her children.

Arnie learned to serve for Mass in fourth grade and loved it. When the other boys complained about being asked to assist with daily or Sunday Mass, Arnie’s love of the sacrament of the altar helped him persevere. His deep devotion to the Eucharist was a great source of comfort and spiritual growth for him. “When I was young, I wanted to be a priest, you know! I loved serving Mass. Ma wanted to be the sacristan so bad, but she couldn’t. She always had a deep desire to care for the altar.” His Faith grew over the years, as he dutifully served for Mass each Sunday, reaping the benefits of frequent reception of the sacraments.

“They said, ‘When the church bell rang, they knew the Hundts were coming’ ‘cause we were always late! And since I served Mass, they couldn’t start without us.” He added with a smirk. “We had stations after Mass, and the long version! We stayed at church all Sunday morning ‘til noon, if you believe it!”

As he grew into young adulthood, Arnie’s love for the Eucharist deepened. “I’ve served for 28 different priests and Father Hugo Koehler was my favorite,” he said. “Each priest was different and wanted things just so, but ya know what was the same about them all? Every one of them turned bread and wine into the body and blood of Christ for us.”

Father Koehler brought even more activity to the already vibrant, small church, and left a lasting impression on Arnie. “We put on a three-act play every spring, and he was the director,” said Arnie. “We wrote and acted in the play, and had so much fun in the CYO [Catholic Youth Organization]. We had a basketball team, softball team and dances. Every Sunday afternoon, you’d have 15 to 20 of us boys playing basketball after Mass. Every month, we’d have meetings and we’d play records. Oh, we had so much fun!
That was our social life.” All aspects of Arnie’s life could be traced back to his involvement in the parish.

I’ve served for 28 different priests … but ya know what was the same about them all? Every one of them turned bread and wine into the body and blood of Christ for us.”

His Faith was tested more than ever during World War II. “I really wanted to be a priest,” Arnie said, “but then the war came and disrupted everything. On Dec. 8, 1941, Ma came out of the house and told me, ‘We are at war.’ From then on, she was always afraid because my big brother Emil was off fighting the war.” He recalled that time with misty eyes and a saddened countenance. Even before the war, his family of 16 would pray the rosary on their knees together every evening. After his brother Emil left to serve overseas, they prayed for him each night. Even now, Arnie and his wife Madonna, pray their rosary nightly.

Arnie and Madonna met at the wedding of a family member. “My older sister married Madonna’s brother, and the wedding was at the house where I was born. It was ‘bout 20 below outside and we both were crowded around that woodstove trying to keep warm.”

The two were married at 18 years old in 1947 at  St. Peter. Arnie and Madonna raised 10 children and passed their Faith onto them each day as they lived their vocation. When asked how they made sure their children knew about their Faith, Arnie looked puzzled. “It is our life,” he said. Living their Faith was as simple as breathing and is deeply ingrained in their identity to this day. They celebrated their 73rd wedding anniversary on June 17, 2020.

After getting married, Arnie was looking for ways to serve his Church like he used to serve Mass in his youth. Recalling how his mother always wanted to serve as sacristan, he set his sights on this role for the parish. With a new pastor came new opportunities.

Monsignor Francis Abuah-Quansah was a jolly man, with a laugh that filled a room and a smile you could not resist. Monsignor Abuah-Quansah arrived at St. Peter Parish from Ghana, and when he came, there was an opening for a sacristan. “I had asked so many priests that were here if I could be the sacristan, but he finally said ‘yes.’ I wanted to do it because my mother never got to. I dedicated that job to her,” Arnie said with tears streaming down his face. “She had such a deep love of the altar and all she wanted to do was serve. I tried to make her proud.” His mother’s deep Faith was inspiring to him, and with her encouragement, his Faith grew just as strong.

When asked about the changes he has witnessed over the years, he said, “The most changes I have seen occurred after Vatican II. The altars were turned and the Mass changed. We used to do everything in Latin … Us servers had to learn a lot of Latin.” He recalls the years following the Second Vatican Council with mixed emotions. “I grew up there, you know, I was so used to it. There was some good and some bad in it and time will tell.” Through the years, Arnie’s Faith only grew deeper. No matter what changes or challenges he faced, his devotion to the Blessed Sacrament grew through daily Mass and his prayers to Our Lady through the rosary remained constant.

Arnie recalled, with a smile and reminiscing look, some of the trials he and Madonna have faced. “We’ve had a lot of challenges and our Faith just got stronger. We are both cancer survivors. We had a lot of mouths to feed and there were some tough times. One year at Christmastime, we had two [of our children] in the hospital.”

A recent challenge was the passing of their eldest son. “He lived in Phoenix, you know, and we visited every year. He asked me one time if he could be buried on top of me, but now he’s there before me.” He quieted himself and let the tears fall silently before gathering himself to say, “You’re not supposed to bury your children.” Adding later, “You don’t bail out from your Faith when something like that happens. You lean in.”

Arnie is a shining example of the lay faithful. He lives his vocation with every breath and leads by example. Sitting on his deck, overlooking the land his family has farmed for centuries, Arnie recalls a happy life. In his 91 years of life, he has always lived in view of his church. He was baptized there, married there, saw five of his 10 children married there, and last spring laid his eldest son to rest there. He still enjoys tilling his fields, baling hay for the livestock and working in the fields alongside his son. From each place on his farm, he can see his beloved “Jewel on the Hill,” and just as he sows seeds in his fields, he sends prayers to heaven waiting for God’s will to be done in his life.