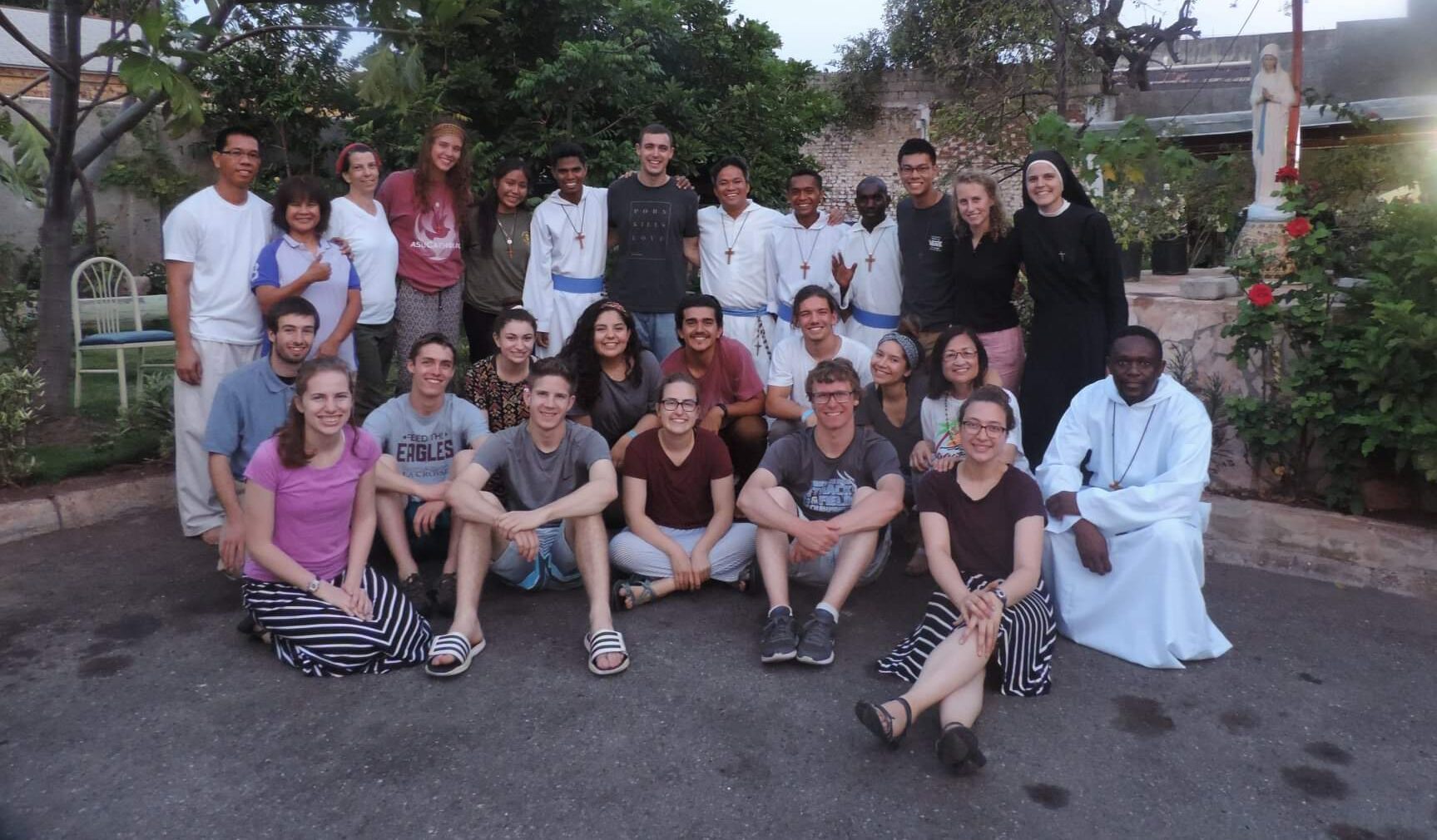 Derek Edwards of La Crosse accepted the invitation of his girlfriend to come to church and, as a high school junior, converted to Catholicism. The relationship ended before he went to college, though, and Derek had to decide whether to continue to grow in his Faith.

He met with the campus Fellowship of Catholic University Students (FOCUS), who offered him opportunities to be part of Bible studies and connect with other Catholics on campus at the University of Wisconsin La Crosse (UW-L).

It was at a SEEK conference, at the start of his second semester, where his Faith was transformed. “I got hooked,” says Derek. “I came to believe that I was loved by God and that he was calling me to a relationship with Him. That was when I started exploring the deeper Faith questions.”

Returning from the conference, Derek got more involved in FOCUS. The invitation to pray for an hour every day and attend daily Mass, helped him discern his plan for his life, which previously centered on becoming a doctor.

Derek felt he was called to help people, but needed to release his need for personal glory. Praying in the campus chapel helped him refocus.

“At that particular moment, when I was praying,

I wrote down in my journal, ‘What do I want to do?’” Derek says. “I wrote down that I wanted to bring God to the people. At that point, I started thinking about religious orders and the priesthood.”

Derek explored being a diocesan priest as well as a call to community life. “It was really the Jesuit spirituality that attracted me,” he says.

During his college sophomore year, while in discernment with the Jesuits, Derek had an impactful class, Global Infectious Disease.

After reading Mountains Beyond Mountains by Tracy Kidder for class, Derek was inspired to sign up for a FOCUS Mission trip to Haiti during spring break.

“I remember feeling like I was in a different world,” says Derek. “I felt called to respond to the ignorance I had before going to Haiti.”

The college missionaries stayed with the Missionaries of the Poor community. Living with them, and being part of their work in Haiti, was very powerful for Derek.

Derek returned home with his FOCUS group, but something was different. “I couldn’t shake the experience,” he says.

After taking a break from academics, Derek went to live with the Jesuits in North Dakota and then entered the Jesuit novitiate in St. Paul. “I was only there for three weeks,” says Derek. “On the day that Mother Teresa was canonized as a saint, I went with other Jesuits to a Mass with the Missionaries of Charity.”

During the Mass, the Missionaries of Charity shared how Mother St. Teresa had joined a different order of sisters and then felt compelled to work with the poor and start a new order. “It was the same experience that I had,” Derek says.

The Jesuits made more sense, but Derek continued feeling a pull to the Missionaries of the Poor. After talking to his Jesuit adviser, Derek had one day to decide between the orders.

“The call to join the Missionaries of the Poor remained through all of it,” says Derek.

After committing to the Missionaries of the Poor, the logistics of joining the order were complicated by Derek’s student loan debts. His spiritual director helped him connect with the Labouré Society based near Minneapolis. The organization helps men and women discerning religious life utilize fundraising to pay off student loans.

To make the Missionaries of the Poor deadline of January 2019, Derek had only six months to raise enough money to pay off his student loans. “It seemed almost impossible to raise what I needed in six months,” he says.
Then an opportunity arose for Derek to go on a two-week pilgrimage to Our Lady of Guadalupe in Mexico, further reducing the time for fundraising. “It was a very last-minute thing,” says Derek. “I was convinced I was called to go on this pilgrimage.”

I came to believe that I was loved by God and that he was calling me to a relationship with Him.”

Derek spent 40-hour weeks sharing his story to earn the money needed to meet his goal. An impossible task? Derek trusted in God.

“On the feast day of Our Lady of Guadalupe, it was clear I was going to meet my goal,” Derek says. The notification came on Christmas Day that he went over his goal.

His departure to join the Missionaries of the Poor in Jamaica had several delays and, instead of landing on the island in January, he stepped off the plane on May 10.

His first few months were spent getting to know his new brothers, while working at the centers established to aid men, women and children living on the streets.

“We care for them. Our motto is ‘Joyful Service to Christ on the Cross,’ and that is really what we do every day,” says Derek. “The brothers seek to bring the joy of Christ in what seems so despairing. There’s almost a chilling joy there. It doesn’t make sense because there is so much suffering, but it does make sense from a Gospel perspective.”

Derek learned to live in a new way and with men from around the globe. “I was stripped of my cultural comforts and left to understand people in different ways,” he says. “It was a powerful experience. I learned a lot about myself and the world.”

Threaded all through Derek’s life was the Catholic Church and the work done by the Holy Spirit. Faith was a part of his new daily life. “It was challenging,” says Derek. “There were times where I didn’t know what was going on and I had to go with it. I think humility was the greatest thing I learned.”

In August 2019, Derek returned home to Wisconsin to take care of visa requirements. He went back to Jamaica in November, believing it would be years before he came home again.

Holidays with the Missionaries of the Poor were memorable. “Christmas with the brothers was amazing,” Derek says. “I got to celebrate Christmas in eight different cultures. How often do you get to do that?”

An unwanted holiday gift for Derek and several other novitiates was contracting dengue fever. The illness brought him back to Wisconsin once again.

Derek is relying on his Faith for not only healing, but also for a new approach to the illness, which has resulted in an autoimmune disorder that has affected his ability to swallow. “I would have given up if it weren’t for my Faith and my deep conviction that God is with me,” he says. “My suffering has transformed me and has value.”

Prayer has provided insight that his health challenges will help him truly understand the lives of the people for whom he wishes to care for. “It’s my calling from Christ Himself,” says Derek. “I’m called to serve Him in whatever way He wants.”