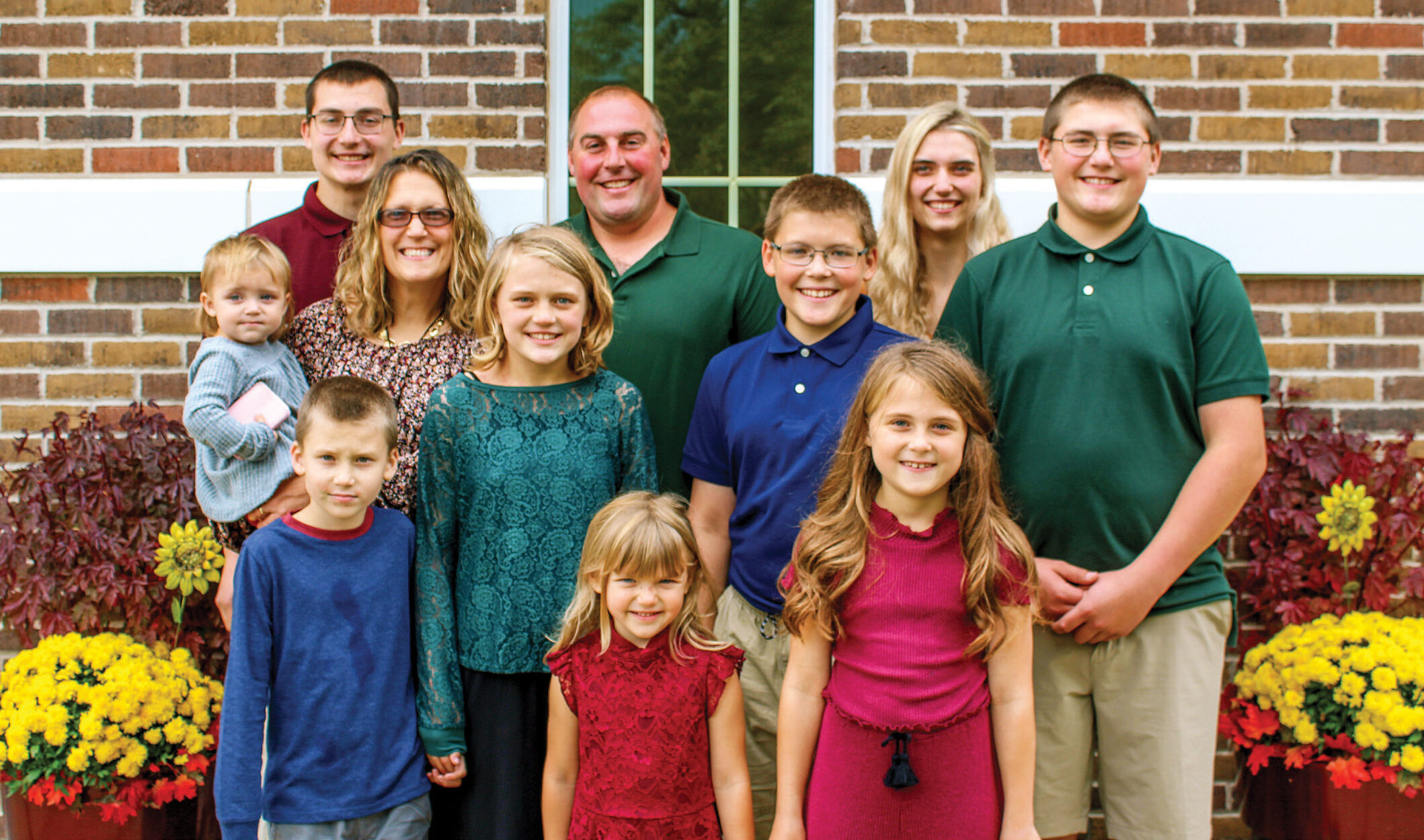 Allan and Connie give their lives to God and reap joy

Faith, farm and family have been intertwined for Allan and Connie Walter of Loyal since they married in 2001. The couple are raising their family of nine children on the farm where Allan grew up and continues the family membership at St. Anthony de Padua Parish.

“I’m the fourth generation farming here,” says Allan. “My great-grandfather was the one who settled here from Germany.”

Faith has always been part of Allan’s family, as much as farming. His grandfather lived on the farm while Allan was growing up.

“He was really inspirational for me,” Allan says. “He always had his rosary. Sometimes after school, we would come in and say the rosary with him.”

Great Aunt Annie lived on the farm with Allan and Connie after they got married. Up every morning at 3 a.m., his aunt put prayer before the rest of the day’s activities.

Prayer and Faith were as natural as tilling the fields or milking cows for the Walter clan. “These people around me, all they did was pray,” he says. “I was really blessed.”

“I was telling him about my stuff, and he told me the stuff that was happening with him. I suddenly understood that God sends you people to share your burdens.” -Allan

Prayer and Faith were an invaluable gift for Allan and Connie right from the beginning of their life together.

“We got married in 2001 and in 2002 we had a barn fire,” says Allan. “The barn burned down and there was a neighboring barn where we moved the cattle.”

The late fall fire meant a new barn couldn’t be constructed until spring. Unfortunately, after surviving the fire, half of their herd of cows died that winter due to unknown causes.

Young and disheartened by the dual tragedies, Allan and Connie turned to their Faith for answers. “It was just so stressful,” Allan says. “They always say, ‘Good things happen to good people,’ but what happens when bad things happen to good people? We wanted to know, what does God have in store for us? I went to see Father Roman Kaiser, and he helped us through this really tough time.”

That difficult winter, Allan gained insight into how God takes care of his children. One morning after the death of another cow and dealing with a tractor that wouldn’t start, a neighbor stopped to talk to him.

“I was telling him about my stuff, and he told me the stuff that was happening with him,” Allan says.

“I suddenly understood that God sends you people to share your burdens.”

Faith and family were also intertwined with the birth of their second son in 2004. On May 18, Connie’s contractions had started.

Allan had to put the cows in and get things settled on the farm before they could leave for the hospital. Road construction required a longer drive to the hospital, and as they were coming into Loyal, Connie’s water broke and the baby’s head started to crown.

Close to St. Anthony’s, Allan went to get help from Father Kaiser. “I knocked on the door and ran in, telling Father, ‘Connie’s having the baby,’” says Allan.

By the time he and Father Kaiser returned to the car, Connie had delivered the baby. “Louie was born at St. Anthony’s,” Allan says with a laugh.

The story of Christ’s birth resonated even more with Allan after that experience. “I could connect with that,” he says. “God puts you in places where he wants you to be.”

Childbirth created a different challenge for the appearance of the next Walter child. Connie’s quick labor yielded a baby boy with the umbilical cord wrapped around his neck and blue from the lack of oxygen.

“That was such a scary moment,” says Allan. “If Jesus wasn’t with us that day, our son would have died.”

The next trial involved the farm in November 2009. A fire started when a hot light touched the straw.

It just ripped me up. I thought, ‘How can we go through another one?’ It was Christmas and it was raining. I was milking cows and the rain was coming in.”

The setback seemed to draw them closer to their parish family, even attending evening Mass during the week with the family. Connie credits Father Jerome Naduvathaniyil for the family’s increased involvement in the parish.

“He wouldn’t take no for an answer,” she says.

“We started reading, we went out of our way to help,” says Allan.

Then an article about Rural Life Day in the Times Review inspired Allan. He wanted the celebration to happen at the Walter farm instead of in a church, as it had been in the past.

In 2012, Allan wrote a letter to Bishop Callahan for consideration to have the celebration in September 2014 on the farm. The bishop wrote back and agreed to the request.

“We did planning for two years,” Allan says. “We were gung ho. There were 700 people here. We asked the kids to come. We did a collection for the food pantry and had the kids bring the collection up in wagons and wheelbarrows.

“It was in our machine shed,” says Connie. “The day was awesome. Everybody from the deanery had their own banner hanging up. The bishop was blown away.”

“It reminded me of Jesus taking James, John and Peter up for the Transfiguration,” Allan says. “The whole shed was packed with people praising God.”

In 2015, Allan had a dream they made the shed 50 feet bigger to hold more people. In September, straight-line winds hit the farm and blew the shed out onto the road.

“When we rebuilt the shed, we built it 50 feet bigger,” says Allan, making his dream a reality.

It’s a tough life. You work a lot. God guides your heart to where you have to be. –Allan

So, when House of Mercy—a shelter for women and children—needed funds in 2017, Connie and Allan offered the use of their shed for a Catholic Charities benefit. There was a concern with some about having a fundraiser in the shed.

Seeing Bishop Callahan at a funeral, Allan asked him if he would attend the benefit. “He said, ‘Absolutely,’” Allan says. “That got the ball rolling. In July, we had the benefit. Roberto Partarrieu (executive director of Catholic Charities) said it was the largest fundraiser that they had for Catholic Charities. And the bishop did come.”

All the work on the farm while growing in their Faith is something Allan and Connie’s children share with their parents. The kids all see hard work is important both on the farm and to grow with God. A Catholic education for all the children has helped reinforce the right values.

“It’s a tough life. You work a lot,” says Allan. “They know I love religion. So, when they come home from school, they always want to tell me about religion.”

Faith is also shared with extended family. Allan’s nephews help him on the farm.

One day, one of his nephews told Allan he wished there was a book that could tell him what he needs to do in life. “I said the book is already written. God guides your heart to where you have to be,” Allan says. “They told my sister they learn more out here working on the farm than they did at CCD.”

Sharing their Faith is important to Allan and Connie. They rejoice in God’s love, which they have experienced in the support of neighbors, friends, and their church community every time life has been challenging. Allan and Connie believe the gifts of love and joy and hope are available to all who seek them.