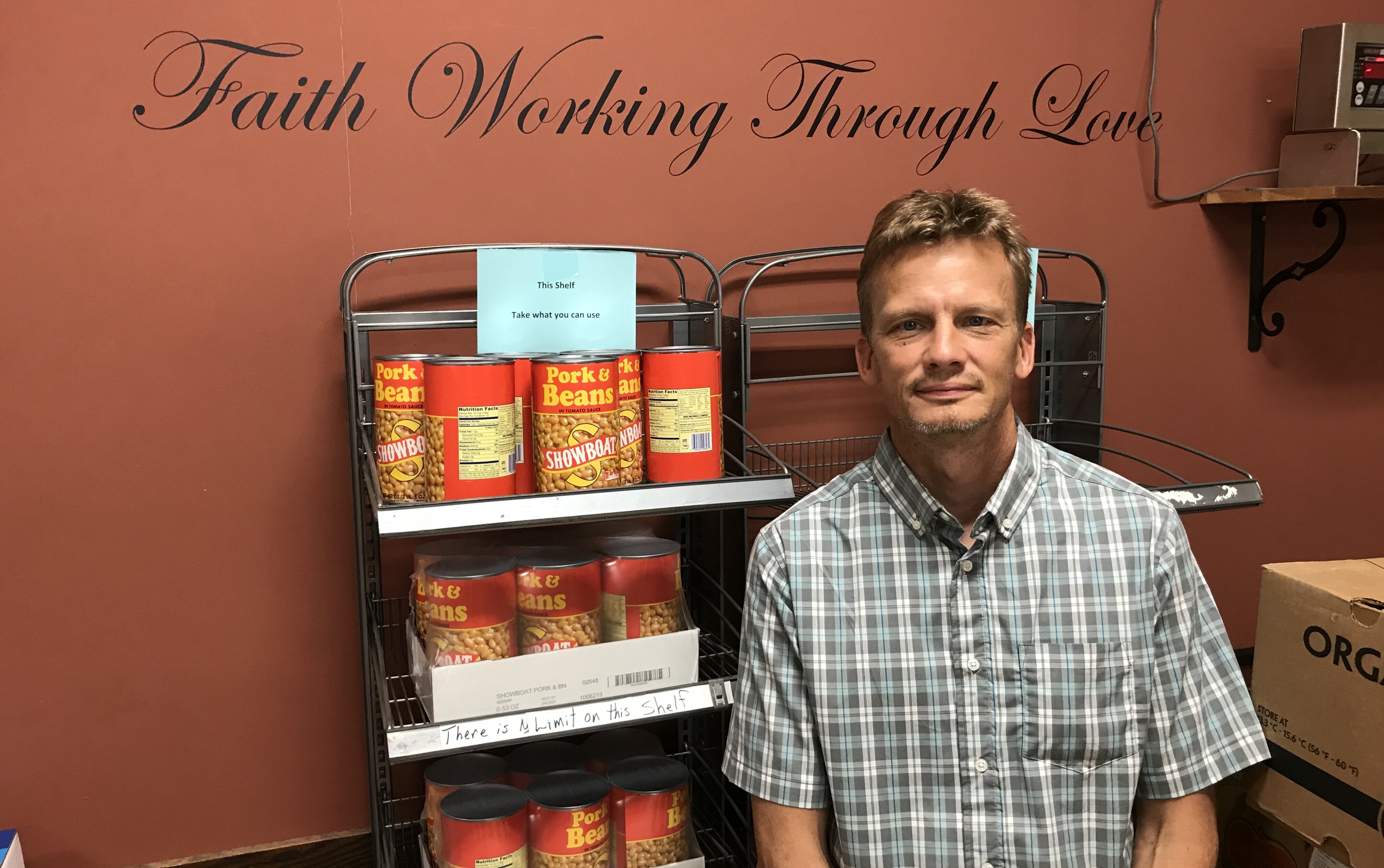 “If you keep showing up, Jesus will put you to work in some way.” That’s how Matt Elstran, a member of Notre Dame Parish in Chippewa Falls, explains the pro-life, charitable and evangelization efforts he has embraced over the years.

Matt’s words about “showing up” refer to fidelity to daily Mass and to his eucharistic adoration hour, every Tuesday from 2 a.m. to 3 a.m., he has kept for 15 years. He confesses to missing twice–once because of the flu and once when his first grandson was born.

As he speaks about his spiritual commitments, there is no hint of pride in Matt’s voice. In fact, upon meeting him you would never guess all that he has done. He doesn’t come across as a “mover-and-shaker” type; just a quietly humble man so soft-spoken that you have to listen closely to catch everything he’s saying.

Matt was born in Chippewa Falls in 1966 and has one younger sister. The Elstran family belonged to Holy Ghost Parish, which his parents still attend. Matt is grateful for the good, loving example they set in raising him in the Faith. Having said that, the family has an intriguing religious lineage. On his mother’s side, his grandmother was Catholic and his grandfather Lutheran, and going back a generation, his great grandfather was a Lutheran minister, while he had a great aunt who was a School Sister of Notre Dame. One odd result of this divergence was his maternal grandparents’ decision to raise their five boys Lutheran and their four girls Catholic! The latter, including Matt’s mother, attended McDonell Catholic School in Chippewa Falls.

Despite his faithful upbringing–and like many of his peers who grew up in the ‘70s–Matt drifted from his childhood Faith as he went off to UW-Stout, where he got a technology degree. After college, he moved to Milwaukee, where he found work and married his wife, Rhonda, who had attended the same high school in Chippewa Falls but was a year ahead of him. Rhonda was Lutheran, but the young couple were sporadic in their church attendance (mostly Catholic churches) as Matt worked long hours in middle management at iron and aluminum foundries. While living in Milwaukee, the couple had their first son, Nick, now 30.

Matt never cared much for Milwaukee, so he and Rhonda moved back to Chippewa Falls after a few short years. As Matt puts it, “There’s no place I’d rather live than Chippewa Falls.” They had their second son, Eric (now 28), and, after working a couple of years as a machinist and a millwright, Matt was faced with an opportunity in 1995. His uncle was ready to sell a six-cabin resort that Matt’s grandfather had originally built on Lake Wissota on the outskirts of Chippewa Falls in 1953. Matt took the leap. Two years later,
he was able to make the Hideaway Resort his full-time occupation.

From the time they moved from Milwaukee back to Chippewa Falls, Matt and Rhonda had alternated between Catholic and Lutheran church attendance, but now Matt began to study the Catholic Faith more deeply. Feeling a stronger and stronger pull, he started attending daily Mass, as well as eucharistic adoration, which was begun by Father James Benzmiller.

Rhonda was attracted by what she saw happening to her husband. As Matt puts it, “When I was younger, I didn’t always live my Faith so well; I was more of a ‘me’ person. But then when you actually begin to live it, it makes it easier to draw your spouse in.”

Sure enough, Rhonda entered the Church in 2003, along with their two children. Their shared Faith brought with it a shared openness to new life, which led to the birth of Owen (16) and Olivia (11).

I knew we wanted to feed and clothe people, but why couldn’t we combine that with the Faith and pro-life dimensions?”

As he grew closer to Christ, Matt found himself becoming more responsive to the needs of his neighbors in the community. He joined the Notre Dame Parish Social Justice Committee, looking for ways to serve. Passionate about the pro-life cause, he was helping with a 40 Days for Life prayer campaign when he heard a local young woman by the name of Katie Stelter tell her story of post-abortion healing and redemption. “I remember thinking, this would make a powerful film,” he recalled. His sons Nick and Eric were studying cinematography in the Twin Cities at the time, so Matt enlisted them and funded and directed the film “Metamorphosis” in 2013, in which Katie re-enacts her dramatic story. A link to this deeply moving, 30-minute film can be found at the diocesan Respect Life website (diolc.org/respect-life).

In an effort to address community poverty and hunger, the parish Social Justice Committee organized food drives to contribute to the Salvation Army. They visited it and other food pantries in the area, and gradually an idea blossomed to have their own parish outreach. Tina Simmons, a member of the committee, said, “Matt was the one who grabbed hold of the idea and went full force with it.”

Fast-forward to December of 2014, when the St. Francesca Resource Center (SFRC) opened its doors in the former Notre Dame Parish school building. In the first five years of its existence, thanks to the leadership of Matt and the Board of Directors and the work of its dedicated volunteers, SFRC would distribute more than 800,000 pounds of groceries, 50,000 articles of clothing and 2,000 packages of diapers. When the pandemic hit, SFRC had to move from an indoor pickup to a curbside delivery model for the food pantry, and they did so without missing a beat.

Still, the distribution numbers don’t convey the fullness of the vision embraced by the St. Francesca Resource Center. Matt recalls, “I knew we wanted to feed and clothe people, but why couldn’t we combine that with the Faith and pro-life dimensions?” And so they added the Avila Room, a place where young and expectant mothers would be supported in choosing life and learning parenting skills through personal mentoring and a video program run by Tina Simmons, who recently came on full time as the SFRC’s outreach and services coordinator (see accompanying article on page 22). SFRC added a table of Catholic resources staffed by parishioners representing St. Paul Street Evangelization, an international ministry that invites people, in a non-intrusive way, to know more about what we believe and live as Catholics. “We want to minister not just to physical needs, but to spiritual needs as well,” Matt says. “We want to help people encounter Christ.”

For Matt, the work and the environment of SFRC have to flow from respect for the dignity of each person. “Food pantries can look like warehouses,” he said. “We wanted to make ours more like a regular retail space and include a warm and inviting office area that looks more like a living room, where you can come on in and have a conversation.” In the central food “shopping” area of the pantry hangs the motto of SFRC in large letters: “Faith Working through Love.”

In the end, whether it’s the pro-life video, the St. Francesca Resource Center or any other project with which Matt Elstran has been involved, everything circles back to that habit of daily Mass and weekly adoration. “If you keep showing up, Jesus will put you to work in some way. And he’ll never be outdone in generosity.”