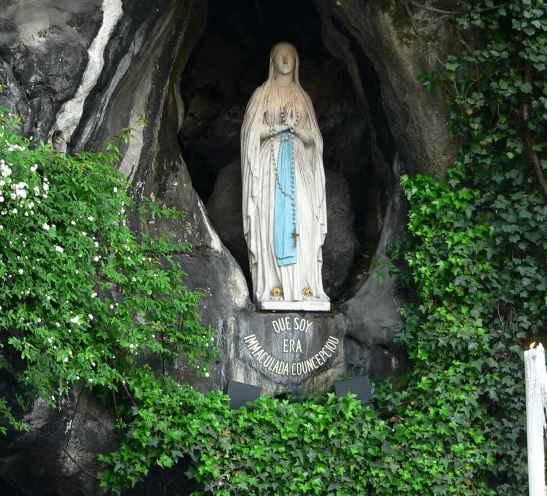 Lourdes is known the world over as a place of hope, healing and pilgrimage. Once a small market town in the southwest corner of France, Lourdes is now home to the Sanctuary of Our Lady of Lourdes, one of the most visited Catholic pilgrimage sites in the world. And each year on Feb. 11, the Church celebrates the feast honoring the Blessed Virgin Mary, Our Lady of Lourdes.

In February of 1858, a 14-year-old peasant girl named Bernadette Soubirous, from a poor family in Lourdes, was gathering firewood with her sister and a friend when she experienced the first apparition of the Virgin Mary. As Bernadette came near a grotto, she saw a light emanating from a bush. The light surrounded a woman in a white dress holding a rosary. She took off her shoes to wade in some water near the grotto, and then, in her own words, Bernadette recounts:

“I came back towards the grotto and started taking off my stockings. I had hardly taken off the first stocking when I heard a sound like a gust of wind. Then I turned my head towards the meadow. I saw the trees quite still. I went on taking off my stockings. I heard the same sound again. As I raised my head to look at the grotto, I saw a lady dressed in white, wearing a white dress, a blue girdle and a yellow rose on each foot, the same color as the chain of her rosary; the beads of the rosary were white. … From the niche, or rather the dark alcove behind it, came a dazzling light …”

Bernadette reports that she attempted to make the sign of the cross, but her hands were shaking so much that she was not able to. The lady, wearing a white veil, smiled, and invited her to pray the rosary with her. Bernadette did, with her own rosary. According to Bernadette, when the lady spoke to her, she used the polite form (vous), not the informal (tu), thus affirming Bernadette’s dignity. Meanwhile, her sister and friend had seen nothing.

The Blessed Virgin Mary would appear to Bernadette 17 more times, telling her to pray for sinners, to do penance and to have a chapel built in her honor. The lady asked her to dig in the ground, where she found a spring. She was told to drink from the spring, which she did. It was initially muddy, but eventually began to run clear.

Bernadette continued to visit the grotto to see the lady and hear her words until one day, on March 25, the lady said, “I am the Immaculate Conception.” This apparition came less than four years after Pope Pius IX proclaimed the dogma of the Immaculate Conception—that Mary was free of original sin at her birth. Bernadette’s last visit to the grotto was on July 16, 1858.

Many people did not believe Bernadette when she spoke of her visions. But the water from the spring was reported to be healing, and it was curing people who followed the instruction of the lady to “drink at the spring and wash in it.” Thousands began to travel to Lourdes from other parts of France and from all over the world. In 1860, Church authorities began an investigation into the apparitions, and finally, the local bishop, Betrand Severt Laurence, concluded:

“We are inspired by the commission comprising wise, holy, learned and experienced priests who questioned the child, studied the facts, examined everything and weighed all the evidence. We have also called on science, and we remain convinced that the apparitions are supernatural and divine, and that by consequence, what Soubirous saw was the Most Blessed Virgin. Our convictions are based on the testimony of Soubirous, but above all, on the things that have happened, things which can be nothing other than divine intervention.”

In 1907, Pope Pius X introduced the feast of Our Lady of Lourdes, and Bernadette was canonized by Pope Pius XI in 1933.

At least 60 miraculous cures at Lourdes have been documented by Church authorities, although many believe there have been thousands more. There still may be people who doubt the apparitions of Lourdes. Perhaps the best that can be said to them are the words that introduce the film “The Song of Bernadette”: “For those who believe in God, no explanation is necessary. For those who do not believe, no explanation is possible.” St. Bernadette eventually became a nun, but she remained humble and did not want to be praised. She died at the age of 35. The hidden treasure that was the life of St. Bernadette managed to yield the harvest of the Marian shrine at Lourdes, which attracts more than 5 million pilgrims each year.