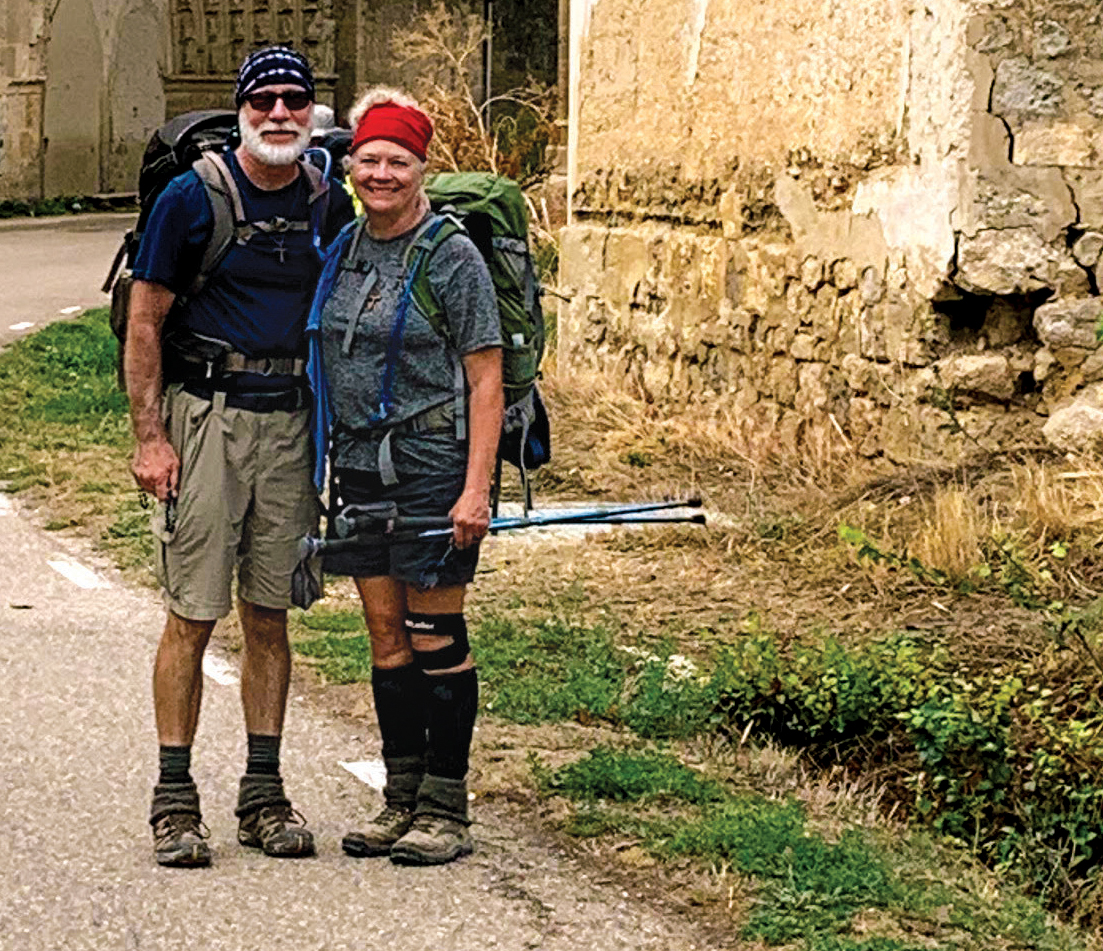 El Camino de Santiago is known to call out to men and women who are searching. Kevin and Peggy Dubois, Secular Franciscans of La Crosse, answered the call in September 2019, and the journey changed their lives.

Also called “The Way of St. James,” the Camino begins in France and ends at the Cathedral of Santiago de Compostela in Galicia in northwestern Spain. The “Camino Francais,” the path taken by Kevin and Peggy, is the most popular of many routes. It extends for 500 miles across northern Spain, ending in Santiago, where the bones of the Apostle James are housed within the cathedral. It has been a source of pilgrimage since the 11th century, one of three recommended that Catholics take during their lifetime (the other two are Rome and the Holy Land.) Prior to the pandemic, a quarter of a million people walk it every year, more during holy years.

“Father Conrad Targonski, OFM says the Camino calls,” Peggy says. “We don’t always hear God’s calling. We get too busy in the commotion of the world around us.”

“I heard the call from the books we read,” says Kevin. “You try to read and place yourself in their footsteps, but it was so different being there. Even though Peggy and I went there together, we had our own separate Caminos.”

“The Camino called me for many years,” Peggy says. “Walking was an answer to a call. Christ calls each of us to what is best for us. It may take some time (years!) to bring that call to fruition, but He continues to gently call and find a way—often in ways that we could not have thought of or planned, but always for what is best. My goal now is to continue to listen for His call—to trust in His plan for me.”

“Some say that your Camino begins the day you decide to walk it.” – KEVIN﻿

“Some say that your Camino begins the day you decide to walk it,” says Kevin. “Our Camino was much longer than the time we spent in France and Spain.”

Guidebooks were consulted, websites were studied, gear was purchased and training began with long hikes locally. What they discovered was trust in God was most important.

On Sept. 1, 2019, before dawn, Kevin and Peggy took their first steps on the Camino. “One day, we woke up and started walking in France,” says Kevin.

“That was the first night I slept in a room with people I never knew,” Peggy says. “I was scared to death that morning. It was the point of no return for me.”

The Camino welcomed them with breathtaking scenery as they walked in the clouds, over the Pyrenees. Their breath was literally taken away.

“I was nervous that morning, my stomach was all knotted up,” says Kevin. “I don’t think I have ever walked over terrain like that in my whole life. It was a long, strenuous day, but what kept us going was the spectacular view.”

“Each night, as you arrive at the town where you will stay, you usually can’t get into the refugio (hostels established along the Camino for the pilgrims) until after three because they are cleaning,” Peggy says. “You take a shower anda nap and then enjoy a community dinner. The first night, we met three pilgrims from Brazil. They gave us four crystals, almost like amethysts. I carried those crystals every step of the way. People were so kind. You don’t forget when people share a piece of themselves with you.”

Both Kevin and Peggy intended their pilgrimage to be a prayerful journey, opening their minds and hearts to God’s message. “We had 500 miles of listening,” says Kevin, who is retired from the Army. “For me, it was hard because my mind is always going at a hundred miles an hour. I always want to plan things and have things in order.”

There are no tour guides, travel agents or reservations found on the Camino. “We said the same prayer together every morning,” Kevin says. “‘Lord, we place this day at your feet and we ask you to find us a place to sleep.’”

God answered their prayer. Every night, Peggy and Kevin had shelter and the opportunity to shower.

As a podiatrist, Peggy made sure she and Kevin had just what they needed to care for their feet. She felt called to share her knowledge and healing hands with other travelers.

“She was a saint on the Camino,” says Kevin. “We would see pilgrims tending to their sore feet along the Camino and in the evenings at the refugios.”

During a day of rain, Kevin passed a man with a bad limp, walking down a lonely and steep road. Sharing encouragement was part of Camino life and Kevin told the man he would be OK.

When he looked back, he saw Peggy’s backpack sitting on the ground, as she was fixing the man’s knee. “That hit me hard,” Kevin says. “She taught me a lesson that day in humility. Our job on the Camino is to look out for each other.”

Before the Camino, Peggy had questioned whether she should retire. “The lesson I learned is that I love my job,” she says. “Each time, when I was able to help someone, I felt good. What an affirmation that what
I am doing in my everyday life is the right thing.”

Peggy ministered to more than feet—she wrapped knees and removed a thorn causing a finger abscess. During the pilgrimage, she was approached by people who heard about her healing abilities.

Initially, Kevin’s journey was to support Peggy and challenge himself physically. “I’ve always been a very competitive person. The first week, when we were walking slower than other pilgrims, it bothered me,” says Kevin. “I learned I didn’t always have to be first—on the Camino or in a conversation back home. Once I got to that point, it made walking so much more pleasurable. We tried to make every step a prayer. It seems hard to do, but when you set your mind to it, it’s not hard. I’ve never prayed so many rosaries in my life.”

Peggy and Kevin planned to walk the Camino in 33 days to mark each year of Jesus’ life on earth. God and the Camino had other plans for the couple.

After walking the daily long distances, over mountains and rocks, Peggy developed a stress fracture, along with valuable insight. “I learned that I can’t ignore my body. I learned respect for my abilities, and I learned that our bodies are a gift from God,” she says. “The verse from Matthew, ‘Suffering leads to perseverance,’ I said that a hundred times. The suffering that goes hand-in-hand with walking the Camino lets us share in the path that Christ took while incarnate. It is the tool He uses to bring us closer to Him. The hope—within the trail of perseverance, leading to character, leading to hope and hope never fails—fulfills itself in the certainty of His promise and His love.”

As part of the emerging Tau Shalom Secular Franciscan fraternity, Kevin and Peggy evangelized their Faith on the Camino—sometimes through conversation and other times through their prayerful example. “To know that we walked on this ancient pilgrimage trail that St. Francis walked on really helped me on the difficult days,” says Kevin.

“We wore our Tau crosses every day,” Peggy says. “That was a great conversation starter.” Peggy and Kevin both realized that the weight of possessions in their life was holding them back in their relationship with Christ. Walking the Camino gave them the inspiration to let go of their large house and physical possessions when they returned home to La Crosse.

“We have a plaque on our wall that says, ‘Less house, more home,’” Kevin says. “To lighten our load was powerful for both of us during the Camino. Not only to lighten the load of our backpacks, but also lightening the load of excess emotional baggage that I was personally carrying.”

“To lighten our load was powerful for both of us during the Camino. Not only to lighten the load of our backpacks, but also lightening the load of excess emotional baggage.” – KEVIN

Kevin and Peggy woke up on Oct. 5, 2019, knowing they would reach the end of their Camino pilgrimage. The sun rose as they stood in front of the cathedral, alone in the square at that early hour.

“The closer we got to Santiago, there were distance markers. The closer we got, the more real it became,” says Kevin. “It was almost sad because we were nearly finished. We also heard, from other pilgrims, that the real Camino begins the day you finish and come home. What actions are we going to take from the 500 miles of listening? It was very emotional for us.”

Returning to La Crosse, their parish family at Roncalli Newman Catholic Church and their Tau Shalom fraternity were both easy and difficult. Kevin and Peggy continue to feel the Camino in their current lives.

“Every day, I can look at a picture on my phone,” says Kevin. “We experienced God’s grace and mercy.

It helps to look back to ensure that we remember God’s will and we don’t lose faith in humanity. We can look back at all the things we experienced.”

“I would tell people I was a little like Frodo from ‘Lord of the Rings’ on this journey. Kevin was a little like Samwise Gamgee. Neither of us could have made it without the help of the other,” Peggy says. “There’s not a day that goes by that I don’t remember a specific incident that helps me get through the day.

They feel their Franciscan heritage has deepened from all of the many moments of Camino wisdom and joy. A deep connection with God’s creation and majesty, found on the Camino, continues once home.

“Nothing is yours. What a freeing feeling,” says Peggy. “There’s no reason to have what we have and not to share with others. It has invigorated my work. Each person I see, because of the Camino lessons, are a gift to me.

“Even though La Crosse is a smaller town, it seemed like a metropolis to me,” Kevin says of the return home. “I try to keep the Camino spirit and keep things simple, to be quiet and thankful for everything I see in God’s great nature. I never want to forget the amazing things that happened on the Camino. I don’t want it to fade away and it really hasn’t. Once you are a pilgrim, you are always a pilgrim.”

Hearing the call of the Camino?

Want to know more about the logistics of a pilgrimage? Peggy and Kevin are happy to share their experience. Contact them via email at [email protected].