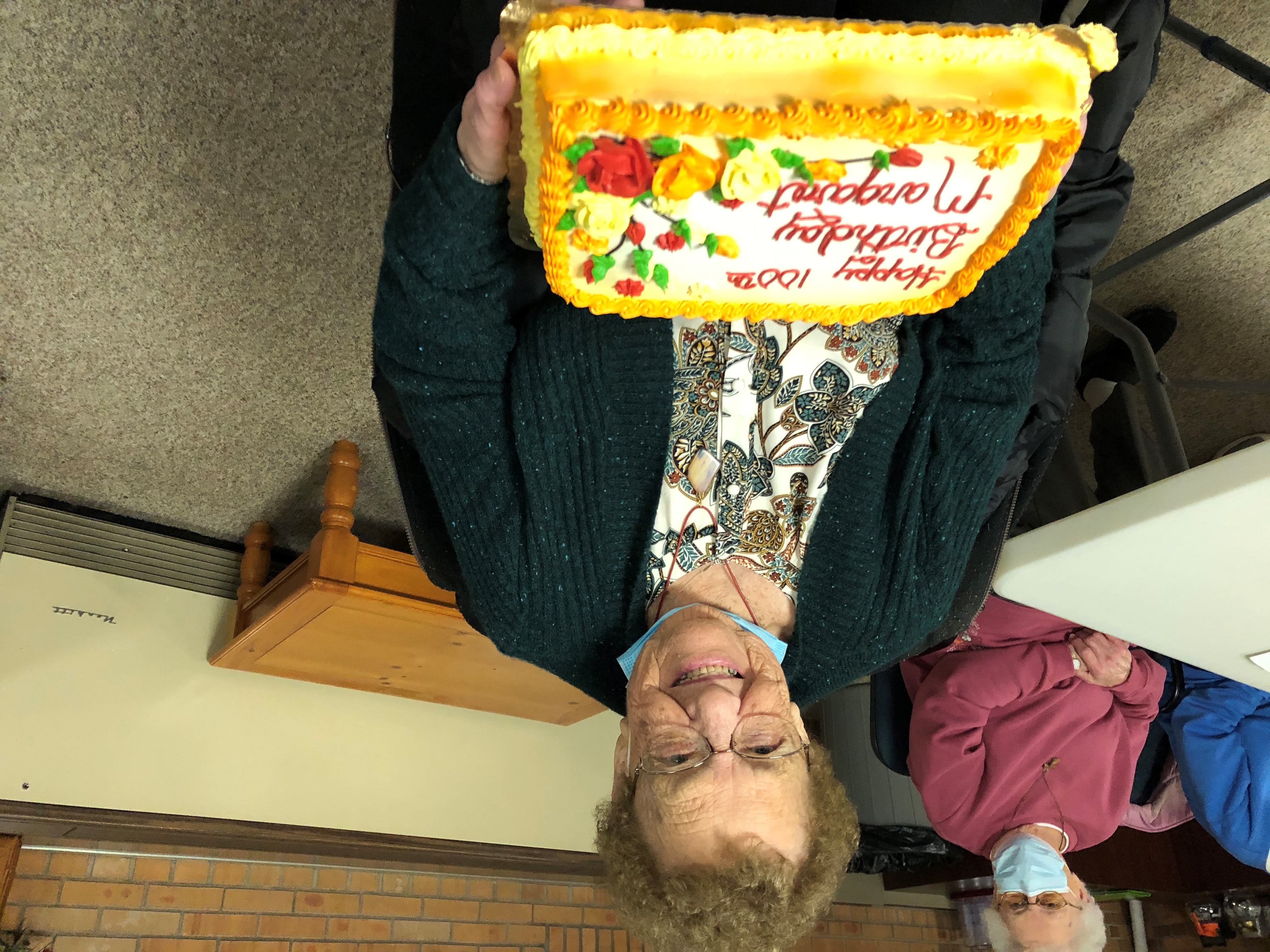 Margaret Shidell proudly says she has been a parishioner of Nativity of the Blessed Virgin Mary Parish in Marathon for almost all of her 100 years of life so far. “I was born in Marathon on Oct. 23, 1920, and received all of my sacraments at St. Mary’s,” Margaret says. “With the exception of two years, when my husband and I lived in Wausau, St. Mary’s has always been my parish. I have been very blessed. I had wonderful parents and a wonderful church life all of my life.”

Margaret’s childhood centered on a close-knit family who lived and worked together. “My father and mother, Peter and Lena Bingen, along with my uncle and aunt, Phillip and Amelia Ritger, ran a one-stop shop in Marathon called Ritger and Bingen,” Margaret recalls. “We sold everything from groceries to machinery to hardware.” The two families lived in apartments above the store, and it was a tight fit. “My aunt and uncle had 11 children and my mom and dad had five children, so there were 20 people living above that store,” she says with a laugh.

The apartments didn’t have running water, either. Margaret remembers walking up and down a flight of 25 stairs multiple times a day with pails of water and wood for heat. “We had a pump outside where we could get the water. We had an outdoor toilet and a little shack where we washed our clothes and then hung them outside to dry,” she says. “We had a cow that would give us milk and we made cheese. We also had a big garden out back where we grew our own vegetables, and we did a lot of canning.”

Margaret remembers her childhood years with fondness. “I was blessed to have had a wonderful childhood. Lots of neighbors all came together every night to visit with each other,” she recalls. “During the winter, we had sleigh rides and went ice skating. In the summer, there were baseball games. All the neighbors were friends. I wish young people today would be able to have that. To me, it was the best time in my life.”

By the spring of 1936, the two families finally got running water in their apartments, but their happiness was short-lived. A tragic fire gutted the building that September, forcing them all to move out. Two months later, Margaret and her family settled into a new home of their own, the very house where Margaret still happily resides.

Faith has always been an integral part of the Bingen household. “As children, we prayed the rosary together every night and the nuns were our teachers at school,” Margaret says. “Father Daniels was St. Mary’s pastor at the time, and he came to our house every Sunday night for dinner. My mother made wonderful cream puffs. I think he came for them!”

Margaret’s older brother, Norbert, followed a vocation to the priesthood. “He was ordained in 1936 and was an associate pastor in Athens and then taught at Aquinas High School. His residence in La Crosse was in a cloistered convent,” Margaret says. “When the war broke out, he wanted to be a chaplain in the service, but he needed to have some surgery done in order to get in.” The surgery, which Margaret says was so minor that today it would be performed in a doctor’s office, took a heartbreaking turn. “The convent was very damp and when Norbert came back from surgery, he got pneumonia. He was hospitalized and then we got the call that he had a blood clot and died. He was only 33 years old and had been a priest for eight years.”

The tragedy took a toll on the family. “Norbert’s death was hardest on my mother,” Margaret remembers. “My dad had died just two years before that and Norbert always told Mom that when he became a pastor, she would live with him.” Margaret pauses and then adds, “My mother went through a lot. My father was paralyzed when he was 40 years old. Norbert died in 1944 and my other brother died in 1951. Plus, Mom had her own health problems. Without Faith, I’m not sure how she would have survived everything.”

Margaret’s future began to take shape when she met her husband, Joe, at a dance in 1939. “We would keep meeting at dances and have a lot of fun. After a while, we started going steady,” she says. “A year before we married in 1941, Joe became Catholic. That was really wonderful. My brother, Father Norbert, married us, which made it very special.” The couple lived in Wausau for two years until Joe entered the Navy. “Joe left in May of 1943 to serve on a destroyer in the South Pacific. I didn’t see him again until the war ended,” Margaret says. “I had a 3-month-old baby when Joe left, and I was lucky to be able to move home to Marathon and live with Mom.” When Joe returned home in 1945, they decided to continue living with Margaret’s mother, as she was in poor health. “We were blessed to take care of Mom for the next 18 years until she died,” Margaret says. “She was a wonderful mother.”

Through the years, Margaret and Joe enjoyed life with their four children: Sharon, who died in 2012 from cancer; Norbert (named after Margaret’s brother); Mary Jo; and Michael. The couple were married for almost 50 years before Joe passed away in 1991, following a four-year battle with Alzheimer’s.

Even though Margaret has reached the century mark, she still remains young at heart. “My children are really helpful to me. I’ve got wonderful kids,” Margaret says with a smile. “I also have 11 grandchildren and 20 great-grandchildren. They all come to my house for holidays and family gatherings.” Margaret’s sister, Norma, is 97 and lives in nearby Edgar. “We see each other quite a bit and make it a point to talk with each other on the phone every day,” Margaret says.

As children, we prayed the rosary together every night.”

When she’s not with her family, Margaret enjoys playing cards, socializing, crocheting and rooting for her favorite team, the Green Bay Packers. Of course, one of Margaret’s greatest joys is going to Mass. “When COVID-19 came along, I was given an iPad so I could watch Mass every day, from anywhere in the world,” Margaret shares. “But watching Mass at St. Mary’s is always my favorite. I’m looking forward to when I can be there again in person.” Margaret is also a proud member of the Secular Third Order of St. Francis for the past 38 years.

Monsignor Joseph Diermeier, Margaret’s pastor, describes her as the matriarch of the parish. “Margaret is a holy, prayerful woman with a heart of gold,” he says. “If I have a special intention that requires prayer, I know that I can count on Margaret to bring the intention before the Lord. She is humble, kind and a Faith-filled woman.”

Margaret says her Faith has gotten her through many difficulties in the past 100 years. “I was born at the end of the last pandemic, the 1918 Spanish flu, and have gone through a lot in my lifetime, including wars and the Great Depression,” Margaret reflects. “I thank God for my Faith through the years. When things were so bad, without Faith, I don’t know where I would have been.”

What advice does Margaret have for a young person striving to live a good life? “Be honest and kind, and love each other. Do the best you can and always put your Faith first,” she says without hesitation. “I pray the rosary every night for peace in the world and peace in families. I pray for my children and grandchildren that they all get closer to God. We all need that. My mother always prayed for us; now it’s my turn.”