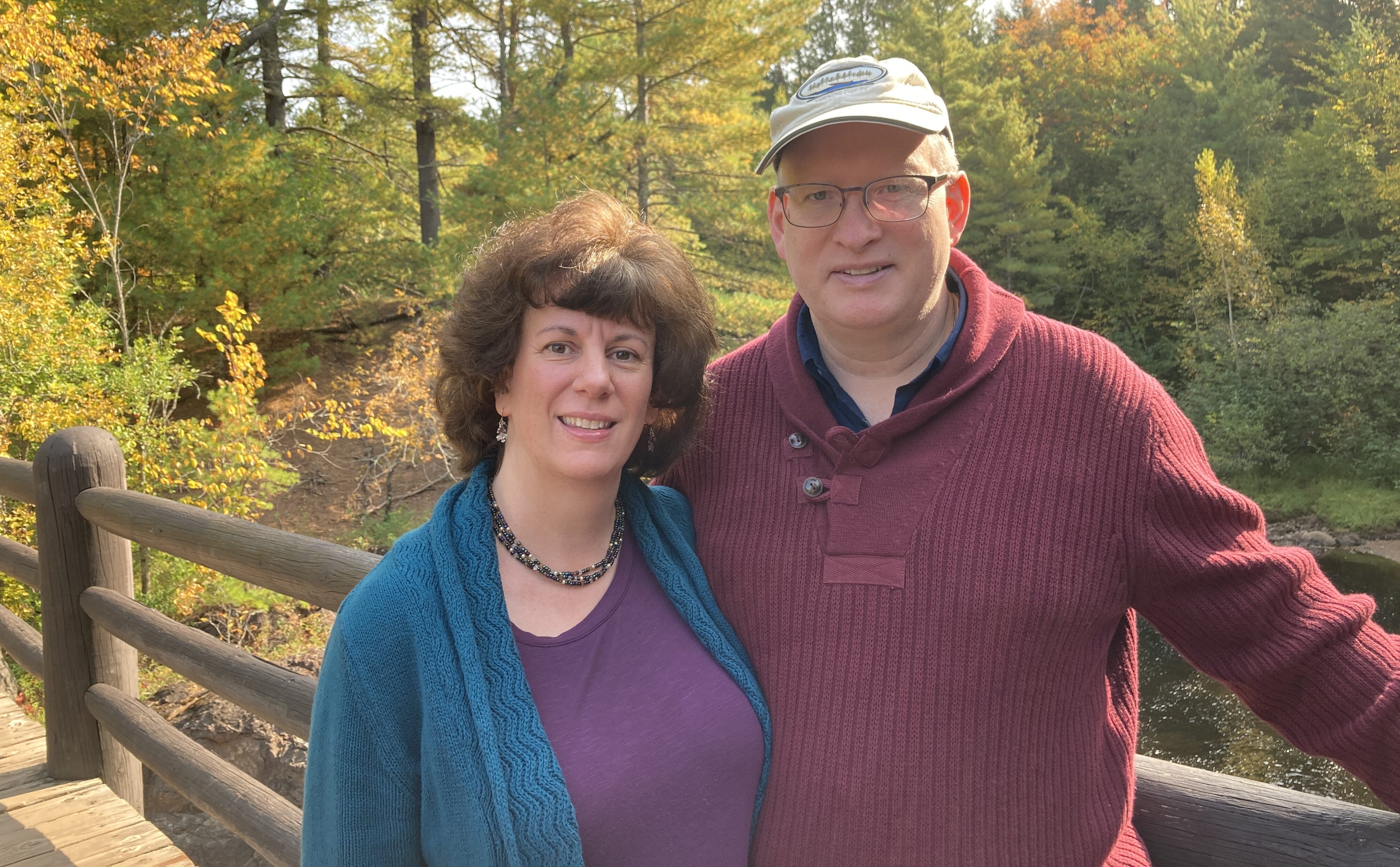 Every day, parents teach their children by their words, examples and actions. The family unit is commonly referred to as the “Domestic Church” and, as Pope St. John Paul the Great tells us, “Catholic parents must learn to form their family as a domestic church, a church in the home as it were, where God is honored, his law is respected, prayer is a normal event, virtue is transmitted by word and example and everyone shares the hopes, the problems and sufferings of everyone else.” It is the distinct privilege of parents to choose to follow God’s will for their life and their family as they live their vocation. It may be a big change, such as moving your whole family to a new area or simply living your daily life in search of holiness.

Joseph and Mary Lehn are a warm, lovely couple. Joseph has a guarded smile and intelligent, piercing eyes. Mary’s warm, chestnut tresses fall gently around her face and frame a smile that warms the heart. Their home is nestled halfway up a hill on a quiet cul-de-sac. The couple has a welcoming home that lends itself to reflection. Their gathering space is ripe with books and Catholic sacramentals and suggests the gentle contemplation of a library. Together, they have created a home for their family that is filled with joy and space to grow, both intellectually and spiritually. The pair have raised four children—three sons and one daughter. They have intentionally chosen to follow the will of God for their lives and that of their family.

While their kids were young, the two prayerfully considered where they might live and what kind of lifestyle they desired for their family. In a move that was reminiscent of the Holy Family, Joseph and Mary packed up their children and belongings and moved to the Coulee Region. “We had never been to this region, but when we came down to look at a different property, we drove through these river valleys and fell in love. We knew where we wanted to live. It was like going back 25 years in time. The pace of life was slower, the geographical area was stunning and there were many Catholic churches.” Once settled, the family found it was a great challenge to leave their homeschooling community behind, but persevered, fortified by trust in our Heavenly Father’s plan for their lives. “It was natural for us to miss what we left, but God always provides us with new opportunities. That was true 14 years ago when we moved, and it is true to this day.” Mary said. The challenges of moving with young children were not lost on this family, but bolstered by Faith, they remained steady in this decision. “Looking back, it is easier to see God’s hand in our lives and the great blessing it has been to be here. The generous people that we met early on became dear friends and that, too, was a generous gift from God.”

We have daily interaction with the church and it is normal for us to live our Faith with our kids.”
–JOSEPH

The spouses were born and raised in rural Minnesota to farm families, but while Mary went to Catholic school, Joseph attended public school in his town. When they were first married, they wanted to send their kids to Catholic school, but “God kept putting people in our path that would ask questions like ‘Have you ever thought about homeschooling?’” Mary recalled. “We had enrolled Steven in Catholic school, but two weeks before school started something changed.” The couple decided to homeschool. Did they know anything about how to homeschool? No. Did they feel strongly that this was what God was calling them to do? Yes, so there they went. Intimidated, overwhelmed and scared, the couple took to researching and learning about how to make this possible for their family. “It was wonderful, and we just kept going,” said Mary. “We came to love how homeschooling became our way of life. It was a way of living our Faith with our children and teaching them how to serve each other and not be burdened by limitations. It was freeing to be able to be at home with our kids, and oh, it was fun! There were challenges, but it was so fun to be able to watch them learn and grow.” Mary’s face lit with joyous memories as she spoke about the beginnings of their homeschool journey.

The peace that comes from choosing to follow God’s wishes for your life is stronger than any doubts or struggles they encountered, of which there can be many. “We will only do it for this first year,” the pair reassured themselves, but one year quickly turned into all of elementary school. “When the kids are older, they will go to public high school,” the parents said. Fast forward to today, and their youngest is preparing to graduate from their homeschool curriculum. The couple saw the decision to homeschool as a gift to their family. They were able to shape their family in ways that would not have been possible, had they been constrained to traditional education schedules. “We were blessed with an abundance of holy and fun homeschool families who were part of our lives and we decided to continue. They have all graduated from Catholic homeschool, they have done well and the oldest is now homeschooling his own family, too.” Mary reflected. “You have to know that homeschooling is not for everyone, but it was great for our family,” Mary added with a soft smile and reminiscent look. Homeschooling their children gave them the flexibility to do fun field trips and include hands-on learning that is not always present in a traditional classroom. It was this that allowed their youngest son to study abroad in Spain during his senior year of high school and ultimately led to his consideration of the priesthood as his vocation.

After joining a couple of different parishes, this family found their home at St. James the Less on the north side of La Crosse. “It was the sacredness that drew us in.” Joseph said. The deep reverence this parish has for the Eucharist is apparent in all things, but particularly in their sacred liturgy and architecture. The church was beautifully restored with sky-high stained-glass windows and the altar is inlaid with relics from so many members of the Church Triumphant. They “fell in love” with the parish there. “The feeling of reverence was so apparent,” Joseph remarked. “The Mass is so important to our family. We wanted it to be beautiful and to give glory to God. It was so reverent and beautiful. It was an experience that gave glory to God. It was all in the details. You could tell that they cared and that the Eucharist mattered to them.”

Joseph recalled, with a happy but reflective countenance, “We had daily interaction with the church and it was normal for us to live our Faith with our kids.” The boys started serving Mass, and the importance of their exposure to the Mass really allowed them to discern their vocations more intimately. All three of their sons entered seminary at one point. The two oldest eventually discerned out, but their youngest son, Peter, is still in Spain, studying, learning and discerning his vocation. The Lehn children were open to a call because they were in an environment where prayer and discerning were daily occurrences in their home. “We were blessed with holy priests who were so involved in our lives and that was important. Priests are real people to our family and kids. It was so much easier for a young person to imagine a priestly vocation, because they were able to see the daily life of a priest,” Joseph described.

Mary added, “It’s so important for families and young men to realize that they can help out their kids by talking about different orders and making those all possibilities. For young women, it’s very normal to think about their options regarding other orders of sisters or nuns, but for men, they are often sent into the diocesan priesthood role, without thinking much of other options.” The Lehns were able to foster vocations in their home by allowing their children room to grow, pray and consider what God may be asking of them in their lives. Leading by example, the couple accepted God’s plan for their life and, in turn, their children were prepared to do the same.

While the Lehns seem to lead a quiet life, it is in the daily joy of their routine that they can listen and hear the will of God in their lives. They were able to grow in Faith through the humdrum of life, and there lies the beauty of the path to heaven in the domestic Church. This couple has dedicated themselves to living in their vocation and living in Christ’s Church and much fruit has been borne from that dedication. Joseph and Mary have had the pleasure of raising four children and bringing them up in the Faith. They now get to experience the profound joy that comes from watching their children learn to lead their own families and therein lies the beauty of the domestic Church.