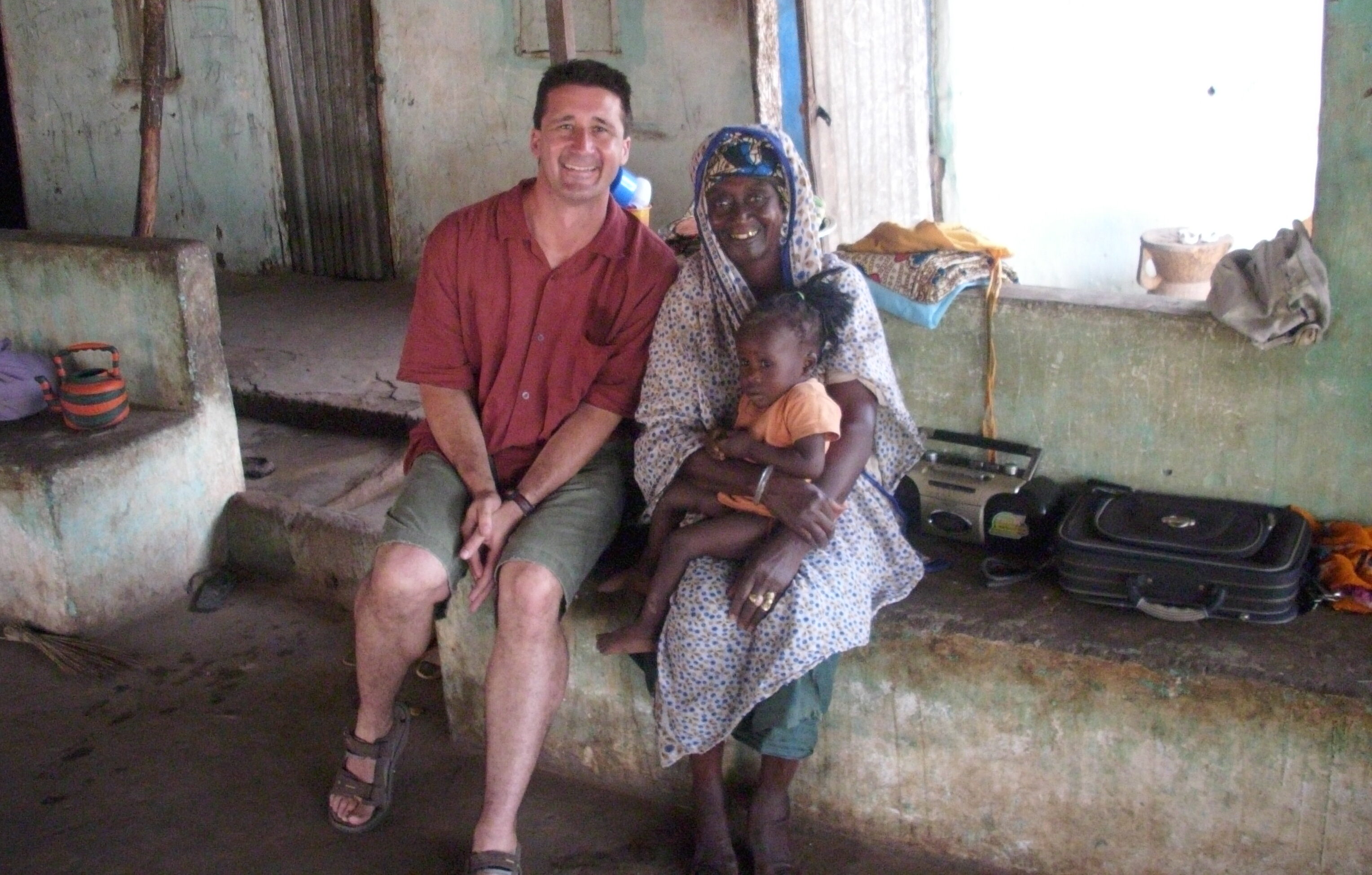 Joseph Koch may be a bona fide world traveler—exploring 154 countries in the last 25 years—but his roots are solidly more local.
“I grew up on a dairy farm in Ashford, Wis., about two hours south of Marathon,” Joseph says. “The farm has been in our family since 1858. My seven sisters and I grew up there and I guess you could say we had a pretty sheltered upbringing. Travel wasn’t really on my radar back then.”

The farmhouse, built in 1888, had only one bathroom for 10 people. “That was interesting, especially with so many sisters,” Joseph says with a laugh. “It was a dairy farm, so we spent a lot of time helping out my dad and mom when I was growing up. My mom passed away four years ago, but my dad still lives in the house.” Joseph hasn’t lived in Ashford for decades, but he still enjoys visiting his homestead. “It’s my getaway now,” he says. “The farm has always been a place to center myself. It’s just so calming there, and a good reminder of my past and country living and values.” Joseph says being the youngest—and the only male—of eight children gave him a good foundation. “My sisters helped raise me. Our family had good, strong, Catholic values, and my sisters had a big influence on me. They were good examples, and I could see, through their relationships, how to be a gentleman.”

It’s when I returned to a job in Catholic education that my Faith really came back to the forefront again.

Joseph attended UW-Madison for an undergraduate degree in education. “There were a lot of distractions when I went to college,” Joseph remembers. “Many young people find themselves questioning their faith at that point in their life. That was somewhat true for me, too. I never abandoned my Faith, but it wasn’t in the forefront, either.”

After earning his degree, Joseph discovered there wasn’t an abundance of jobs readily available for social studies teachers. Through the years, he found work in several other professions as well, including public relations, computer programming and project management. “I’ve spent most of my career in Catholic education, though,” he says. “I taught at a few Catholic schools in the Twin Cities before moving back to Wisconsin after about 20 years. It’s when I returned to a job in Catholic education that my Faith really came back to the forefront again.”

In 1997, Joseph found himself traveling overseas for the first time to student-teach in Australia. “It was my first big trip, and that’s when the travel bug hit me,” Joseph chuckles. “When I was a little kid, a big family trip meant going to the Milwaukee Zoo. But now, I was traveling to the other side of the world.” He says he went to Australia with a large suitcase filled to the brim and a goal to see all the tourist sites. Then he met some locals, who gave him a different perspective. “They gave me a backpack and told me everything that I needed should fit in that backpack,” Joseph says. This began a journey of independent traveling that he calls “authentic travel.”

Since that first trip, Joseph has used his summer breaks to travel abroad and has also taken a few longer sabbaticals. He has traveled extensively throughout Western Europe, the Middle East and Africa. “When I first began traveling, I just went to places to have a good time,” Joseph says. “But the more I traveled—and especially when I got back into Catholic education—my trips turned into seeing a situation or issue and trying to figure out a way to fix it.”

Joseph learned one vital lesson early on. “I realized that finding a solution to a problem in an area has to make sense to the local population,” he says. Thus began Joseph’s quest to find “local solutions to local problems” wherever he traveled. This took “authentic travel” to a whole new level.

“When I was in Africa, I wanted to see how Africans interacted with each other and with me.

I wanted to see how they ate, how they slept, how they got from place to place—and I wanted to see it as authentically as possible. That meant no tours, no African safaris and no organizations with a preconceived agenda,” Joseph explains. “I relied on local transport with my backpack being my travel partner, interacting with the real Africans. That meant no eating at chain restaurants, but eating the just-slaughtered goat with the real Africans. That meant not staying at the upscale, tourist hostels where the local staff are paid to cater to Westerners. Instead, I stayed at the flea-infested, bucket-shower-only hotels where the real Africans are attempting to get some sleep as well.”

Joseph learned some important lessons during his stints of independent travel. “A service organization may come to a remote part of Africa to build a well for the locals, which is great. But what happens a couple of years later, when the well needs repair but the organization is long gone?” Joseph asks. “I’m not saying going in and building a well is a bad thing, but there needs to be a long-term plan, too.”

Finding creative solutions is sometimes also the key. “Maybe a service group wants to come into that same area and build a playground for the kids,” Joseph continues. “I used to think, ‘These kids don’t even have enough food to eat or water to drink, and they want to put in a playground?’ But then I began to understand that while the kids need food and water, they also need some normalcy—like a safe place to play. So, how about putting in a merry-go-round that will also pump water for the community when it’s used? That’s a win for everyone.”

Joseph says the more he traveled, the more he saw the same problems happening over and over again, just in different parts of the world. When he talked about his experiences with others, people began to express an interest in traveling with him. “This led me to start leading some service trips on a small scale,” Joseph says. “We would go to different areas to see how we could actually help the locals.” This might mean arranging for books or computers for a school or building a fence around that school for safety.

In 2011, Joseph felt compelled to form a travel guide service called “Pathinator Travel Lounge” to focus on an educational and “how do we help” component of travel. “We look at the world and see what and why people are doing what they are doing and how we can be of service to others,” Joseph says. For example, Pathinator might be utilized by a church or school group looking to plan a trip with an education or service element.

“Many tour agencies market 10-day ‘life-changing’ experiences, but within 10 days of returning from the trip, the person’s life is pretty much the same,” Joseph explains. “Pathinator trips are often to areas that tourists traditionally don’t venture. They are designed to be a more authentic experience with more interaction with the local people. While jumping off the top of the waterfall can be an adventure, so can crossing the street in Delhi. Many Pathinator trips include some type of service and are for those who don’t want to do a typical organized tour but still need a little guidance.”

Joseph says while he will continue to lead some trips in the future, it won’t be as often. “I’m shifting more to travel consulting, including helping others lead trips, as well as providing education that involves travel, world issues and solving conflict,” he explains. “I’d like to look at conflict resolution through my travel experiences in an entertaining way while relating it to an organization or whatever the target audience is. I’d also like to lead school in-services or company trainings in this way, as conflict resolution is a major area for every organization to improve on.”

While Joseph has many irons in the fire, he successfully balances it all with his current job as principal of St. Mary Grade School in Marathon. “I love working with young people because they’re so genuine—they say what they think,” he says. “There is so much potential and possibilities for young people. There is so much they can do. I love having the ability to help shape students and see them grow.” Joseph says St. Mary School is the perfect combination of being “big enough to be vibrant, yet small enough to be a community.”

Joseph enjoys living in Marathon with his wife, Paige, who he credits with helping him to grow into a better person. “Marriage has helped me understand the needs of others are not just periodic or when it is convenient or helpful for me,” Joseph says. “Paige is compassionate and thinks of others, which helps me do the same. I owe her a lot for helping me develop my thinking.”

While the COVID pandemic has slowed down his travels for now, Joseph says he hopes to one day lead a trip to the Holy Land and other areas that emphasize religious sites. While he understands that international, independent trips may not be for everyone, Joseph does believe traveling has many benefits. “It obviously teaches you about other countries and history. There are also many skills learned, especially when traveling independently, including how to budget both time and money, how to roll with the punches and how to read and understand people,” he says. “The skills needed to be a successful traveler are the same that are needed to be a successful person.”

Joseph sums up his traveling philosophy by sharing a quote from his Pathinator website: “Traveling makes one tougher yet weaker. It is mentally, financially and physically exhausting, yet refreshing; there are no deadlines, no alarm clocks. I often feel like an old man yet I’m running around like a wide-eyed child. There are so many memories I would like to forget and so many memories that are unforgettable.”

TO FIND OUT MORE about the mission of Pathinator
Travel Lounge, go to Pathinator.com