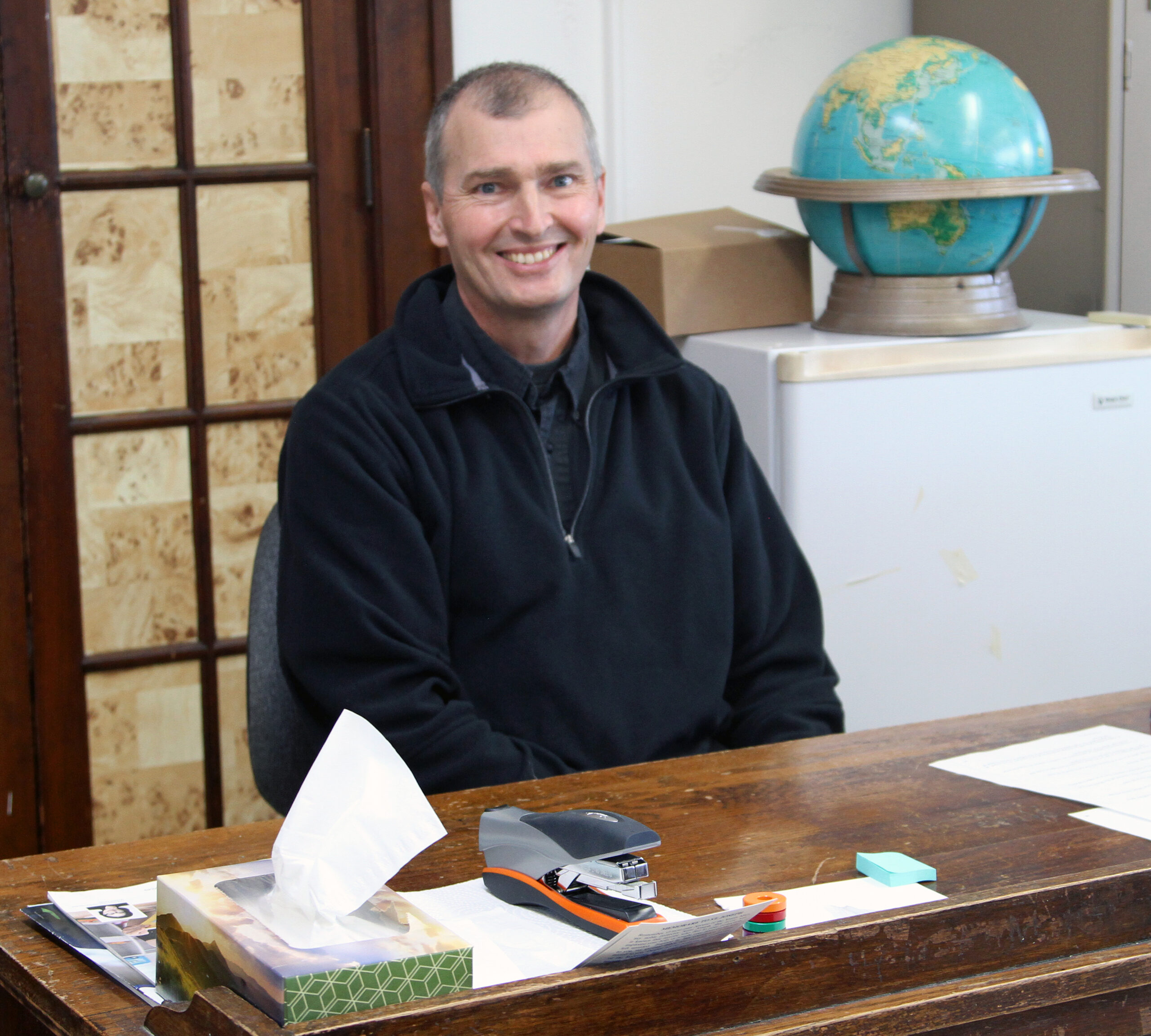 The desire to share our blessings with others can be traced back generations. Inspiration carried forward from our parents, grandparents and beyond motivates us to pass on the tradition taught by example. This sense of generational giving is alive at many Catholic parishes worldwide, including St. Paul Parish in Bloomer.

Parishioner Tom Ruff conveys the Faith, blessings and charism handed down by his ancestors. Tom is the middle school science teacher at St. Paul School, a temporary position he took in 2002 as a volunteer fill-in teacher. “I teach three classes from 11:50-2:10 and then I’m done teaching for the day. I was supposed to be temporary until they found someone. That was 19 years ago.”

Tom’s full-time job is in insurance: “I sell insurance to make a living and pay the bills. I teach because it’s fun and I enjoy it. It’s a way for me to give back.”

The tradition of giving back instilled in Tom goes back to his great-great-grandfather, who fought in the Civil War and then brought the Ruff name to the Bloomer area. As the story goes, faithful area Catholics prayed to St. Kateri Tekawitha for funds to build a church. Their prayers were answered and, in 1876, St. Paul Catholic Church was finished, with the Ruff family one of the many parishioners who stepped up to help make the church a reality. The first parish school was built in 1890, with the present structure completed in 1938.

Tom’s memories of his descendants go back to his grandparents, who were strong and faithful people: “They were daily Mass goers and were always involved with something at the church.”

His grandfather, Arthur, worked hard and raised his family on the family farm and enrolled his three children in St. Paul Catholic School. Once his children were grown, Arthur left the farm and turned it over to Tom’s father, Henry, who raised his family of nine children there. Arthur then started the insurance agency Tom now owns.

I always saw Faith in my parents and grandparents. They were always involved in the parish.”

Tom, along with his siblings, followed in their father’s footsteps and attended grades 1-8 at the parish school, and then attended Bloomer High School. From there, Tom went to UW-Madison, majoring in the farming industry. “After graduating from college, I farmed with my brother on the family farm for six years. Along the way, I figured out I didn’t love farming as much as my brother did.”

Tom decided to return to college and received his physical science degree. He and his wife, Amy, lived in South Carolina, where he taught high school chemistry for two years. “I really liked it, but I wanted to raise my family in Wisconsin.”

Around that same time, Tom’s father was looking to sell the insurance company he had taken over from Tom’s grandfather. “My dad asked if I was interested in purchasing it, and I agreed, knowing this would at least get me back to Wisconsin, where I wanted to be. If I didn’t like it, I could always return to teaching.”

As Tom was building his insurance business, he continued to help his brother on the family farm and volunteered as a school playground monitor when his daughter was in eighth grade. In 2002 Tom was asked to teach science until they could find a permanent teacher. “I figured I’d give it a try. I previously taught chemistry at a public high school, but those kids wanted to be in that class. Middle school is a whole different ball game, so I was very apprehensive.”

Tom accepted the challenge, thinking he’d be teaching for a few months until another teacher could be found. At the same time, he continued managing his insurance business, a small hobby farm, “to keep me from going crazy,” and raised six children, all with the support of his wife.

His few months teaching assignment has turned into 19 years, and Tom finds teaching “tremendously rewarding.” Not only has he taught his children, but he also taught his brothers’ and sisters’ kids. His passion for Catholic education is apparent. “Families are smaller now than when I began teaching, and I don’t think everyone sees the value in Catholic education. We invest so much into our kids, why don’t we want to put a little more towards their education?” Tom isn’t sure how to convince Catholics to send their children to the parochial school. “Maybe it’s just the money. Money never meant that much to me. I don’t know how to convince them. If what they see doesn’t convince them, then what will?”

Tom’s admiration for children doesn’t stop when he leaves the school. He and Amy are the parents of six children, ranging in ages from 33 to 10. “After our third child, I thought we were done with diaper bags,” Tom recalls. But Amy’s heart had other plans. When their youngest child was 6 years old, she felt the calling to adopt. “I questioned as to why would we want to start all over? But she gave me time to consider the idea,” Tom says.

God intervened, as He always does—we can hear Him, if we listen. One day, Tom was attending a school Mass and the children were singing the song “Be Not Afraid.” “It was a sign for me. Looking back, I realize now this was something both Amy and I were called to do.” Since then, the couple have adopted three children. “It’s been awesome, and I can’t imagine life without them,” Tom comments. “The youngest is now in fourth grade. She sparkles and keeps us going.”

With teaching, raising a family and operating his insurance business, you would think Tom’s days would be filled. But he still makes time for his passions of farming and woodworking. “I have a hobby farm that keeps me grounded. I also like to do woodworking projects. St. Joseph and I get along well. It’s good therapy.”

Tom has a strong connection to nature and he values the gifts God has given him. Those gifts are tied to family memories. “My brothers, sisters and I grew up riding our bikes past a big pine tree located near the house our parents built. When the tree went down, I turned it into lumber and made breadboards. It was part of home. Another year, the barn on the home farm was resided. I used the old barn wood to make frames and gave my siblings a picture of our childhood farm, framed with the barn wood. I have a strong connection to things like that. As we get older, it’s these types of things which hold more significance.” Tom is currently working on building rabbit hutches for his daughter.

Being grounded in family and Faith are gifts Tom grew up with. “I always saw Faith in my parents and grandparents. They were always involved in the parish. One of my uncles, Father Francis Ruff, is a Catholic priest. He is well-put-together with peace and joy.” Father Ruff is now retired at the Glenmary Home Missioners in Kentucky.

“My grandparents bought Bibles for each of the grandchildren, for when they got married. That was their gift. Even after they passed away, there was a Bible there for my siblings who got married after their passing. My parents made Faith a priority. My siblings still talk of how they walked down the cow lane to the woods with our parents and recited the rosary. When there was dry weather, we prayed the rosary. If a tornado was coming, we went to the basement and prayed the rosary. It was part of life. My grandmother worked in the garden when it was hot. I remember being with her and a cool breeze came along. She said, ‘Look what God did for us.’”

Tom’s parents didn’t have much. “I didn’t realize how little they had. Mom and Dad didn’t bother us with those things. But I remember there was always money for the Sunday collection. Before we headed to church, Dad would put the money in the envelope. I don’t know if it was on purpose, but we always saw that happen. There may not be money for other things, but he always contributed to the church and always pitched in. That’s the Faith I was raised in.
I struggle to pass on the Faith as it was done for me. We plant the seeds and set the example. Results may vary.”

Tom isn’t sure what the future holds: “I keep discerning that there’s something else, but I don’t know what God has planned for me. I never dreamed I’d be teaching for as long as I have. But then God asks me, ‘Haven’t I taken care of you?’ We all have obstacles like the Israelites. We have to learn to trust in God. I keep trying. God knows what He’s doing.”