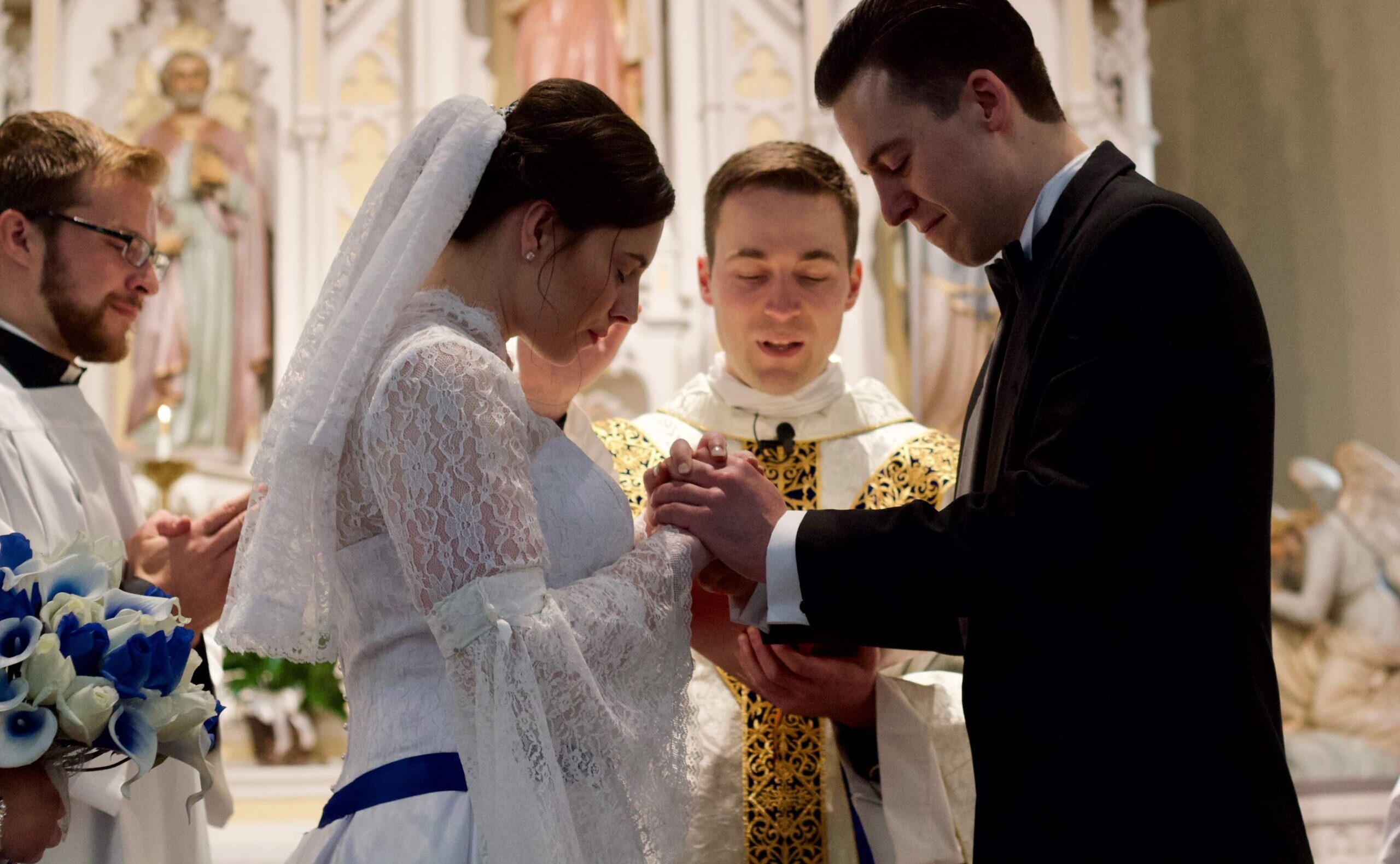 Dustin and Becky Dodge know with utmost certainty that God has perfect timing. The couple met and began dating in 2017, marrying the following year. However, they should have met at least a decade earlier. “We had the opportunity to cross paths so many times when we were younger. We had similar circles of friends—I was in the liturgical choir at the University of St. Thomas with roommates of Becky’s brother, Levi, and Becky worked with my brother, Billy—but we never met,” Dustin says. “It was God’s providence, working through where we were individually in our lives. God was saying, ‘No, not yet. Just wait.’ Because we wouldn’t have connected if we had met any earlier.” Becky agrees. “We both would have written each other off if we had met sooner!” she says with a laugh.

Dustin and Becky had similar upbringings with a strong Catholic foundation set by their parents and grandparents. “St. Mary’s in Big River is my home parish,” Dustin says. “My grandmother, mother, brother and I were all baptized here.” Dustin and Becky’s daughter, Mary Grace, was also baptized at St. Mary’s earlier this year. “Our family has deep roots at the parish,” he says.

“My father grew up Protestant but converted to Catholicism when he married Mom,” Dustin continues. “Dad recognized that it would be best for his family to be united and go to the same church. That was a huge witness for my brother and me.” Dustin’s brother, Father Billy Dodge, was ordained to the priesthood in 2015. “When we were growing up, Mom taught CCD and invited Billy and me to be her assistants. She was always working on growing in faith and she passed that onto us.”

Becky, a native of Sacred Heart Parish in Elmwood, grew up on a farm with her parents and six brothers. In 2008, their family grew when her parents adopted two boys from Guatemala. “Both sets of grandparents were devout Catholics,” Becky remembers. “My maternal grandfather’s family fostered five vocations from 13 children. Grandpa was a great example for us. He didn’t have a loud Faith, but a strong Faith.” Becky and her siblings were homeschooled by their mother and their days included praying the rosary as a family, Mass and eucharistic adoration. “Mom showed us the importance of spending time in prayer, having that one-on-one time with Christ,” she says. Becky and her brothers always knew that a vocation to the priesthood or religious life was an option and her brother, Father Levi Schmitt, was ordained last year.

Mom showed us the importance of spending time in prayer, having that one-on-one time with Christ.” – Becky

Dustin says, “After college, I chased what the world tells you to chase. I graduated with honors and got a good-paying job. But it still felt like there was a hole that needed to be filled.” Dustin began to volunteer as a CCD teacher. “Suddenly I had this class of seventh-graders that I cared about, trying to strengthen them to go out in the world,” he remembers. “Teaching was the most joy I felt all week. It filled that hole that work couldn’t fill.”

He also began thinking about marriage and fatherhood. In fact, his brother told Dustin about a girl named Becky who would be perfect for him. At the time, Father Billy was a seminarian interning at the tri-parishes of Elmwood, Spring Valley and Boyceville, where Becky was the parish secretary. “I blew it off because I thought, ‘What would my brother know?’” Dustin jokes. It took three years for Dustin to give her a call. “I don’t know if it was an angel telling me to call Becky, but her name popped into my mind and I tracked her down,” he says.

Becky had been going through a period of discernment herself. She had contemplated religious life, but God pointed her in another direction. “During adoration, I asked, ‘What am I called to do?’ I heard Jesus say, ‘You are ready’ and realized He meant I was ready for a relationship. It was a little overwhelming,” Becky shares. “I didn’t know what I wanted, so I began a novena to St. Joseph, who was the best model of what I was looking for in a spouse.” She began the novena on a Friday, and the following Tuesday she received that life-changing call from Dustin. “All I could think was, St. Joseph, you work fast!” Becky laughs.

Becky and Dustin soon realized their values and desires aligned and that God was bringing them together for a purpose. “I proposed to Becky on Valentine’s Day, which fell on Ash Wednesday that year,” Dustin says. “I asked her to stay after Mass and pray with me. I knelt on the steps before the Blessed Sacrament in the tabernacle and proposed to her in front of Jesus. She told me later it was the same spot where she would go to pray for her future husband.”

Becky’s engagement ring ended up being one that Dustin had bought for his mother more than a year before he met Becky. “In 2015, Mom asked me to buy her a white gold ring with a blue stone,” Dustin says. “It was a strange request—she never wore white gold or blue. But, of course, I bought it for her.” Four months later, his mother died from a fast-growing brain tumor. Dustin put the ring away, hoping to give it to his wife someday. A year later, when contemplating an engagement ring for Becky, he remembered his mother’s ring. He knew Becky only wore white gold and loved blue. The ring’s stone was tanzanite, Becky’s birthstone, and it had 30 small diamonds–Becky and Dustin were both 30 years old. The ring didn’t need resizing either as it fit Becky perfectly. The symbolism could not be ignored. “I never met his mother, so for me this ring is reassurance that she approved of me for her son,” Becky says. “Billy says their mother made sure Dustin had what he needed when I came along. It’s nice to have that confirmation.”

Validation continued when it came time to schedule their newborn daughter’s baptism and they discovered the only day available for everyone was Dustin’s mother’s birthday. “It was providential,” Dustin says. “Mary Grace was baptized into God’s family on the day her Grandma Mary was born.”

“God was leading us to each other from the very beginning,” Dustin continues. “Becky and I had to be open to His call and have the courage to answer our vocations. We both had times in our lives where we wanted to do it our own way. God’s way isn’t always easier, but it’s phenomenally more joyous.” Becky adds, “Trust that God has a plan that is better than yours. His timing is perfect timing.”