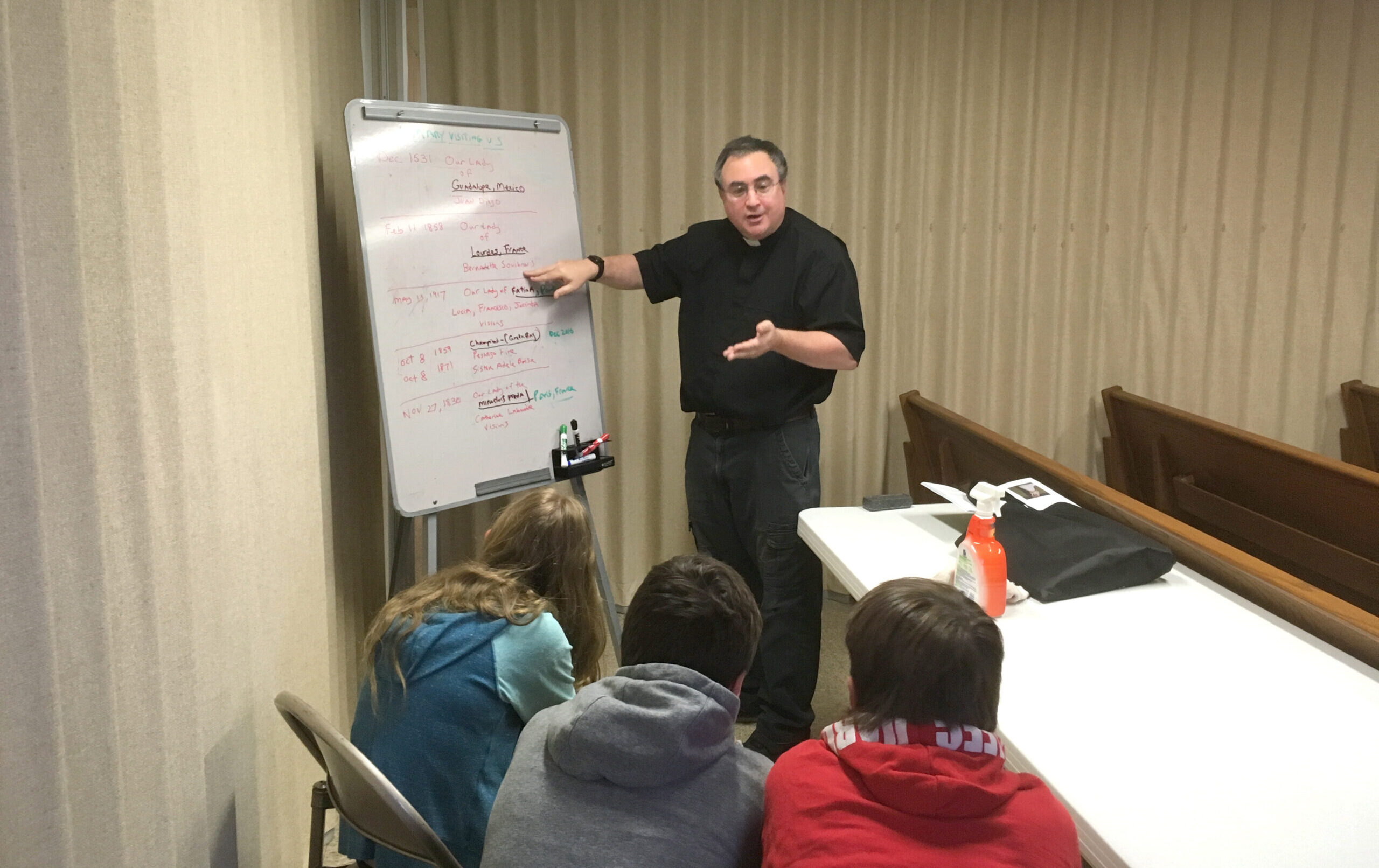 St. Augustine saw the truth and love of Christianity and prayed to be converted—but not yet. He was on the wrong path and began to sense it. In a similar manner, the young Tim Welles followed his own path for a number of years. But like St. Augustine, the truth began to attract him. This sports-minded son of Green Bay began the journey of conversion from his lukewarm, Catholic-in-name-only practice to one of fully embracing his Catholic Faith and later being ordained to the sacred priesthood. Tim’s new life in Christ began to bring about positive changes in his daily experience. Through a providential friendship, he was encouraged to study Mariology. This is the study of Mary—the Mother of God and first disciple of Jesus. As many spiritual writers have found, Mary deepens the Faith and life of Christians. As a result, Father Tim Welles embarked on a seven-year course of study in Mariology. Recently, he attained certification in this field and is available to share this treasure trove throughout the diocese.

Father Welles’ story is about life-giving conversion and unexpected surprises. Let’s go back to the time when Tim was 24 years old. He just learned his paternal grandfather passed away. It was March 24 and, for more than one reason, is etched forever in his mind.

A few weeks later, Green Bay had a big flood. Floating in the basement water of Tim’s home were his childhood rosary and brown scapular. He had not seen these articles for many years. Again reminiscent of St. Augustine’s experience, where the philosopher heard the words: “take and read”—referring to the Word of God, the floating rosary and scapular were symbolically saying to Tim: “take and pray.” It was a reminder of his need to have the Blessed Mother in his life. So he went out and bought a rosary and scapular for $1.98. Such a small cost for such marvelous returns.

Following the inspiration he was receiving, Tim began a discipline of praying three rosaries daily. During that same time, his father started a supper club and Tim did the payroll, accounting, cooking and myriad other tasks to help launch the family business. It was during this period when the first call to the priesthood came, but Tim felt he was really needed by his parents, so he declined. However, as he continued to draw closer to Mary, the step to make his first confession in 18 years was taken. And, through the first Saturday devotions, the healthy habit of regular confession began to develop. He also began to stand up for the unborn by praying with other Catholics at a local abortion clinic.

Following the closing of the family business, the young restaurateur took his know-how to a national chain and achieved recognition for making his store the fourth best in the nation. This is a recurring theme for Tim. He learns a new field and makes it into a top-tier enterprise.

Proverbs reminds us, “Iron sharpens iron, and one man sharpens another.” A truly good friend is like a sparring partner. He will be frank and make you a better man. When Tim joined the Air Force, he met such a friend in Lt. Colonel Matthew Malnar. They first met in San Antonio, Texas, during basic training. Monsignor Malnar was a chaplain from the Diocese of Amarillo.

“Tell me what you’re doing and I’ll tell you why you don’t believe,” was the oft-repeated admonition given by Monsignor Malnar when confronted by people who always want to get their own way. He did not mince words. Straightforward and clear minded, the Lt. Colonel was a friend a man could trust. Tim appreciated his candor with people and the spiritual insights he shared.

Due to a stuttering problem, Tim was discharged because of Air Force rules at the time. But just like his new friendship with Monsignor Malnar, there was a hidden providence in the discharge. When he returned to Green Bay, the still, small voice calling him to the priesthood returned. Although he put it off for a time, eventually Tim said yes!

When he first applied to the priesthood, the Packers had just lost the Super Bowl to Denver. Tim was a regular at Lambeau Field and even touched LeRoy Butler’s helmet when he executed the first Lambeau Leap. Through a series of events, friends encouraged Tim to reach out to Bishop Raymond Burke regarding his vocation. In 1999 he met with the diocesan vocations director and, via the normal process, was accepted as a seminarian for the Diocese of La Crosse and started his studies in Detroit at Sacred Heart Major Seminary, located five miles from Ford Field, where the Lions play.

At nightfall, the echo of gunfire could be heard far too often in the distance. Although this was a culture shock, the seminary had many nationally known leaders in the Church and this helped make the life of community and the education a positive experience. Our Lady and St. Philomena kept Tim going forward despite the gun blasts of drug deals gone bad in the inner city. He also received some excellent counsel at the seminary to overcome stuttering.

In 2005, Tim was ordained a deacon by Bishop Earl Boyea, auxiliary bishop of Detroit. He was sent to Ss. Peter and Paul Parish in Independence. Surprisingly, he learned his old friend from San Antonio, Monsignor Malnar, was living in the same city. Eventually, Monsignor Malnar became Deacon Welles’ spiritual director and mentor.

After Father Welles’ ordination, Monsignor Malnar encouraged him to become a Mariologist for our diocese. During the many years of study, Father Welles began to develop PowerPoint presentations to share with CCD and confirmation groups. These informative talks were developed in response to questions young people had asked. Young people know of Mary but often do not understand how she fits into our Faith. They know Christ is the Mediator but unfortunately, tend to view the angels and saints as characters in a play rather than real persons whom we can know and talk to. For example, a presentation was created early on during his Mariology studies on Mary in Art. This helped answer questions such as “Why is Mary sometimes shown with long hair—emphasizing her virginity—and, at other times with a veil, which highlights her motherhood?”

Once Father Welles observed a mother telling her 4-year-old to look at Mary’s foot as they gazed at a statue of our Lady. The mother was trying to teach her daughter how Mary crushed the serpent, the devil. The bright and spunky little girl asked: “Why, mommy?” This led Father Welles to develop a presentation on the promises of the rosary and the graces we can obtain to overcome evil and difficult problems in life. Other presentations explore major approved apparitions including Lourdes, Fatima and La Salette. The response to these audiovisual talks has been very positive. Later, Father Welles put together “The Marian Spirituality of Bishop Sheen and St. Elizabeth (Mother) Seton,” “Relics and St. Philomena’’ and “Mary’s Mediation.” People can participate in these PowerPoint presentations in person or via videoconferencing.

Father Welles completed his seven-year journey in Mariology studies at the end of 2020 on the feast of Our Lady of the Rosary. His goal is to be a resource for all parishes in our diocese on Marian topics. These presentations will deepen your understanding and love for Jesus Christ and His Mother who He gave to us from the cross.
If you are interested in having Father Welles present on Mariology to your parish or small group, you can contact him at 608-518-1338.