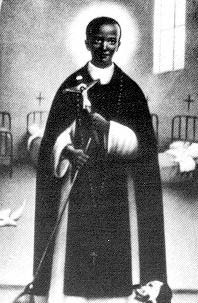 Sixteenth-century Peru was not a good time or place to be a multiracial child, but that’s the world St. Martin de Porres (Nov. 3) was born into. The son of a Spanish nobleman and a free Black woman, Martin was rejected by his father because he was too dark-skinned and by Blacks and Indigenous people in Lima because of his ethnic background. But Martin did not become bitter. Instead, he reached out to others and turned their rejection into respect.

Martin’s father eventually acknowledged his son and apprenticed him to a barber where Martin learned to cut hair and also perform the services of a doctor and pharmacist. Even as a young man, he earned a reputation for healing and became well-known among the Blacks and Indigenous people. But as Martin’s fame as a healer spread, so did his desire to dedicate his life to God.

But his decision to enter the Dominican monastery as a lay brother—and not as a religious brother or priest—angered Martin’s father, who wanted his son to aim higher. Although Martin was content with the lowest place in the monastery, the brothers finally convinced him to make his religious profession as a brother. His care of the sick who came to the monastery soon made him famous, and many people were healed by his touch. Martin also went out from the monastery into the street to find people who needed his help. He gave them medicine, bandages and religious instruction—healing both body and soul.

Not everyone was willing to receive help from the saint, however. Spanish families that had fallen on hard times would rather starve than accept help from a multiracial man. So Martin had a white friend deliver food, clothing and medicine to these families, because he refused to neglect them, even if they rejected him.

By the time Martin reached the end of his life at age 60, people throughout Peru—African slaves, Indigenous people, and Spanish nobles—were coming to the saint for advice and counsel. The conflicts of prejudice and racism could not stand in the face of Martin’s boundless charity and love for others.

Pope John XXIII canonized Martin de Porres in 1962, and he is considered the patron saint of social action.