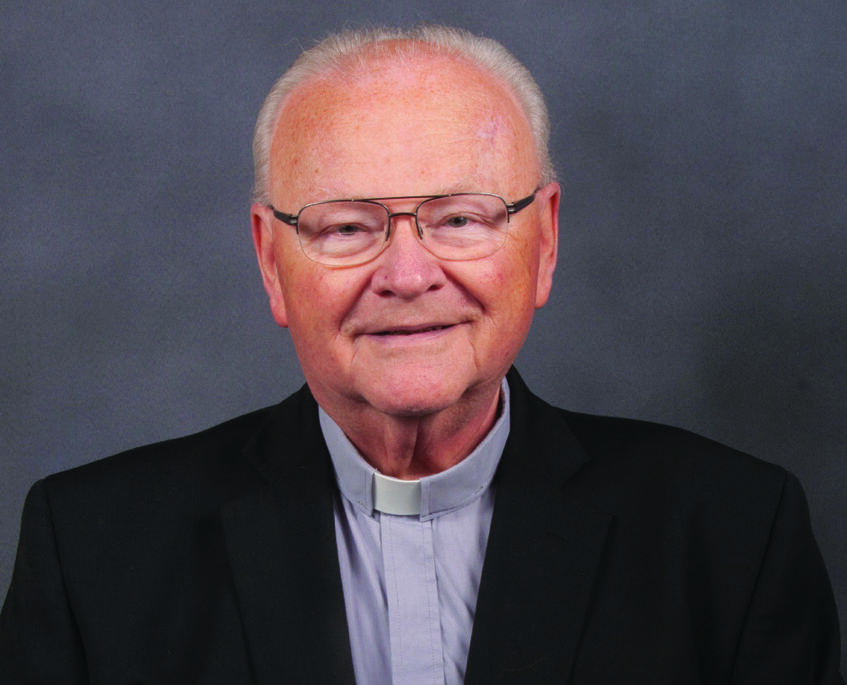 Deacon Richard Sage has served the Diocese of La Crosse for almost 40 years. He felt a calling to ordination and service at a young age, so, for him, discerning the priesthood was a logical step. “From the time I was very young,” he said, “I was very much drawn to the Church and active ministry and serving people.

I grew up at St. Patrick Parish in Onalaska and was always drawn to religious life.” During his sophomore year of college, he spent much time praying and listening to what God was asking of him. Eventually, he discovered that the priesthood was not to be his path and he left the seminary. Shortly after, he reconnected with Mary, a friend from high school. They were married and went on to have three children, but that feeling of a call for service on a deeper level never left him.

“When the diaconate opened, it just made sense. I was drawn to this more formal work of service and active ministry in the Church. I guess I was called to the grace of this sacrament.”

Deacon Sage made an impressive career out of service in his life. He first began working for the Diocese of La Crosse in the Finance Office, putting to use his strong administrative skills and tendencies. During his time working in the curia, the Diocese of La Crosse announced there would be an opportunity for ordination to the permanent diaconate. “When the diaconate opened and I became aware of it,” he said, “it just made sense. I was drawn to this more formal work of service and active ministry in the Church. I guess I was called to the grace of this sacrament in the diaconate.” After a time of careful reflection, he enrolled in what would be the first class of permanent deacons for our diocese in 1977.

The five-year course of study allowed him to further discern his calling. Though the training he received differs from the current format, it is still very similar in structure. Deacon Sage’s diaconate training was broken into multiple parts—two years of lay formation, one year of parish service and two years of diaconate formation. All of this culminates in the sacrament of holy orders in which Deacon Sage took a vow of obedience to the bishop’s chair. He was ordained on June 19, 1983. The calling as a deacon is one to serve, so this was a natural and thrilling step for Deacon Sage. His career allowed him to further serve his community, but now his ordination as a deacon would allow him to serve his own parish on a deeper level. “It’s been a wonderful ministry of service,” he said “and I’ve enjoyed it very much.”

During his early years serving as a deacon at St. Pius X Parish—joined with St. Thomas More Parish in 2000 to form Mary, Mother of the Church Parish—he accepted a new role in his career as the executive director for Catholic Charities. His Faith and career so wonderfully entwined to allow him to serve in all aspects of his life. Though Deacon Sage had a laudable career in service, after his retirement from Catholic Charities, he has now taken to administrative service at his parish. “It was a natural fit for me,” he said, “since that’s where my skills were. As I see it, if I can take some of those administrative tasks off the plate of the pastor, then he can serve the parish better.”

During his noteworthy career in service, Deacon Sage worked with various community partners to offer even more services to those in need. It was his work and dedication that ultimately led to the formation of the Catholic worker house in our diocese called Place of Grace. He served as a founding board member for the WAFER Food Pantry and described that as an “ecumenical effort sprung from a partnership of many different faith backgrounds in this community.” Deacon Sage was also instrumental in the opening of the Warming Center in La Crosse and Wausau, as well as the Sojourner House in Eau Claire.

His life of service was characterized in his career, but his service as a deacon has allowed him to step deeper into the sacrament of holy orders and to help his parish on a more intimate level. “The unique thing of the diaconate is that deacons are ordained to serve. Our chief role is not to administer the sacraments; it is to serve. In the same way as all the sacraments give us extra grace to help us in our vocations, so does the permanent diaconate,” he said. “There are other routes within the diaconate. There may be some who are involved in religious education, marriage preparations, visitations to the elderly and all that’s suited to them. I’ve been drawn to working with the poor and disadvantaged, but deacons can serve where their talents lie.”

Mary, Mother of the Church is a vibrant parish with many parishioners who follow Deacon Sage’s lead in service. Each week, the parish collects food for the local shelters. Most recently, the parish has been taking meals to unsheltered people in Houska Park on Wednesday evenings. During its open season, the parish contributes to the Warming Center in La Crosse by taking meals there every Sunday evening. Deacon Sage’s legacy of service has left a lasting impact on his parish and it’s his hope that he can continue to serve there for years to come. He credits much of his time in service to his wife of 52 years, Mary, and said, “She’s always been patient and understanding. It’s been a true partnership. She kept our home fires burning while I attended hundreds, maybe even thousands, of meetings and evening events at the parish.”Deacon Sage’s example of service in his role as a deacon shines brightly and demonstrates the beauty of the permanent diaconate. “In my 38 years as a deacon, I’ve always been blessed with very good pastors who have always been very kind to me, especially my current pastor, Father Konopa.”

Men who are interested in learning more about the formation, life and ministry of the  deacon should contact Deacon Bryan Hilts, director of the Office of the Diaconate: [email protected].