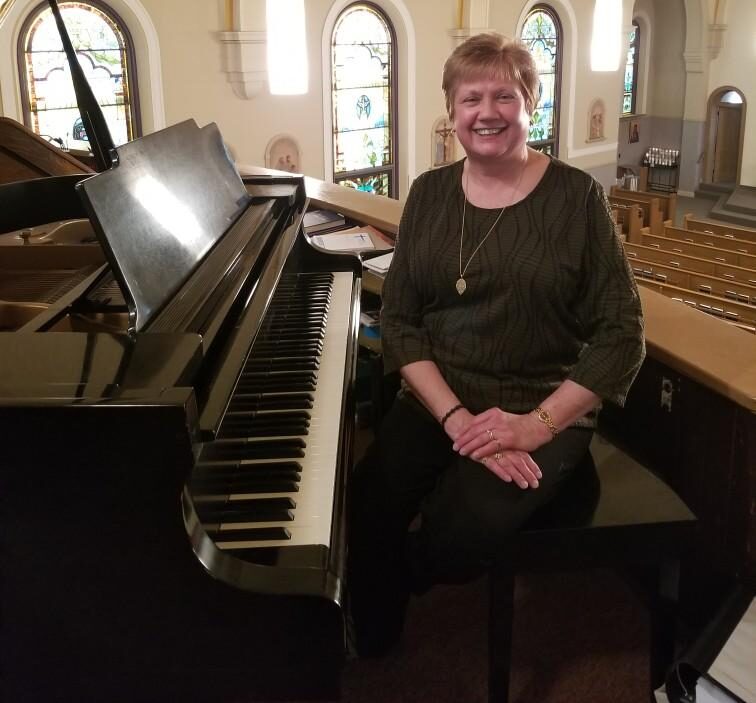 Just as God bestowed upon His people the gift of song to elevate their worship, so did He bestow on Nekoosa a gift in Peggy Wettstein. She is a lifelong parishioner of Sacred Heart Parish and has shared her talent and love of music in many capacities within her parish and community.

Music has always been in Peggy’s blood. When she was born, her brother was almost 15 and her sister was 12. When her sister practiced the piano, Peggy remembers fussing until she would be set upon her sister’s lap.

In 1967, when Peggy was 6, her life changed. Her brother joined the U.S. Army and her sister went off to college. “That was when I became ‘dad’s boy’ and ‘mother’s girl’ on the farm,” she recalls. She helped with the chores that go along with raising a herd of cattle and nearly a couple hundred chickens. “There were always so many eggs to wash for the customers who came daily. The summers were filled with good, honest garden and field work … Everything imaginable was canned or frozen, and lots of it!

“Oftentimes, it seemed that relatives would stop over just before a meal and I remember my mother saying to me, ‘You run quick out to the garden and dig a hill of potatoes.’ And we would all eat; no one ever went away hungry.”

Peggy’s mother’s family was very musical. No holiday or family gathering was complete without an instrumental sing-along. “My grandmother, my aunt and my mother all could ‘chord along by ear’ on the piano to any tune that was played or sung, and I was always fascinated with this!”

When Peggy was 7, it was her turn to begin piano lessons, which she continued until age 22. “While growing up, my mother often would give me a choice: Either I could help with doing the dishes or practice my piano. I was no dummy! I thought I was the smart one, practicing away. It wasn’t until years later that I realized who the smart one was! Soon I could ‘chord along by ear’ on the piano; and although I’ll never be quite as good at chording as my Aunt Ellen was, it is a life skill I use to this day.”

Along with piano, Peggy took up the violin during her youth, which led to the guitar, ukulele, organ and various other instruments. She began teaching private piano lessons when she was 16.

“One September day, a few weeks into my senior year of high school, a friend of mine had an older cousin who was getting married in three days and suddenly realized that she had no organist! After borrowing some wedding music from the school secretary, who played the organ at the Lutheran church, I played for that wedding. Then came the wedding of another friend, a relative, a friend of a friend and so on,” Peggy laughs.

After completing college, getting married and expecting her first child, Peggy and her husband moved back to Nekoosa and purchased a parcel of land on the property where she grew up. Those few years were the only time in her life when she resided outside Nekoosa or even off her family’s land.

After settling back into her hometown, Peggy was talked into playing the organ for Easter Mass at Sacred Heart Parish. “I’m not quite sure how that happened, but I do remember the church being absolutely packed, even the choir loft. That was Easter of 1983 and I have played ever since.” She began working with the church choir in the fall of the same year.

“It was about that time that I realized my life had begun to change. Money had always been tight and bare necessities were somewhat scarce. However, once I began playing for Mass each week, it seemed that when a real need arose for those same necessities, God always seemed to provide. My Faith grew and I became more acutely aware of the presence of God, not only in the people I met and worked with, but in the opportunities that came my way.”

In 1992, Father John Swing became pastor at Sacred Heart Parish and, in 1997, he also became pastor of St. Alexander Parish in Port Edwards. In 1998, Peggy took on St. Alexander’s music ministry and played at both parishes every weekend.

“At first, each parish had its own choir practice,” Peggy explains, “but after a few years we combined into one joint practice. This has led to great camaraderie between members of both choirs! Eventually, we began to sing together as a combined group whenever we sang for funerals or celebrations. We can attest to the fact that strength lies in numbers!”

When Sacred Heart School closed in 2008 due to local consolidation, Peggy’s 16 years as the school’s music teacher were over. She was moved to Assumption middle and high schools, where she taught for four more years.

Father Swing explains, “Peggy Wettstein ‘sets the tone’ at Sacred Heart and St. Alexander parishes. She is our music director and wonderfully lifts our hearts and minds to God through music. Peggy is blessed with an impeccable ability to express the moment in song. She has a talent to inspire young and old … Peggy is very streetwise and able to bring various factions together. She has a perfect sense of timing; knowing when to sing and when to speak, and she does it so well.”

The area-wide Catholic Vacation Bible School recruits Peggy to lead the music for the week. Organizer Rosemary Hokamp explains, “Peggy builds the excitement throughout the week in her music.” And long after the week is over, “the children carry the messages of the music with them and the kids remember the songs for years to come because of her excitement and unlimited energy.”

Peggy married her husband Doug in 2003. Together, they have a blended family of six grown children and nine grandchildren to date. She and Doug purchased the original family farm, where they have recently built a new home. There, they lovingly raise beef cattle and Nigerian dwarf goats.

Endearing in her positivity, Peggy encourages us all: “God’s timing is not always our timing, but it’s always perfect. Our humanness often makes us impatient waiting for the perfect. The beautiful music of life is all around us. If we are not hearing it then perhaps we need to change our own channel … Keep the Faith and keep a song in your heart!”