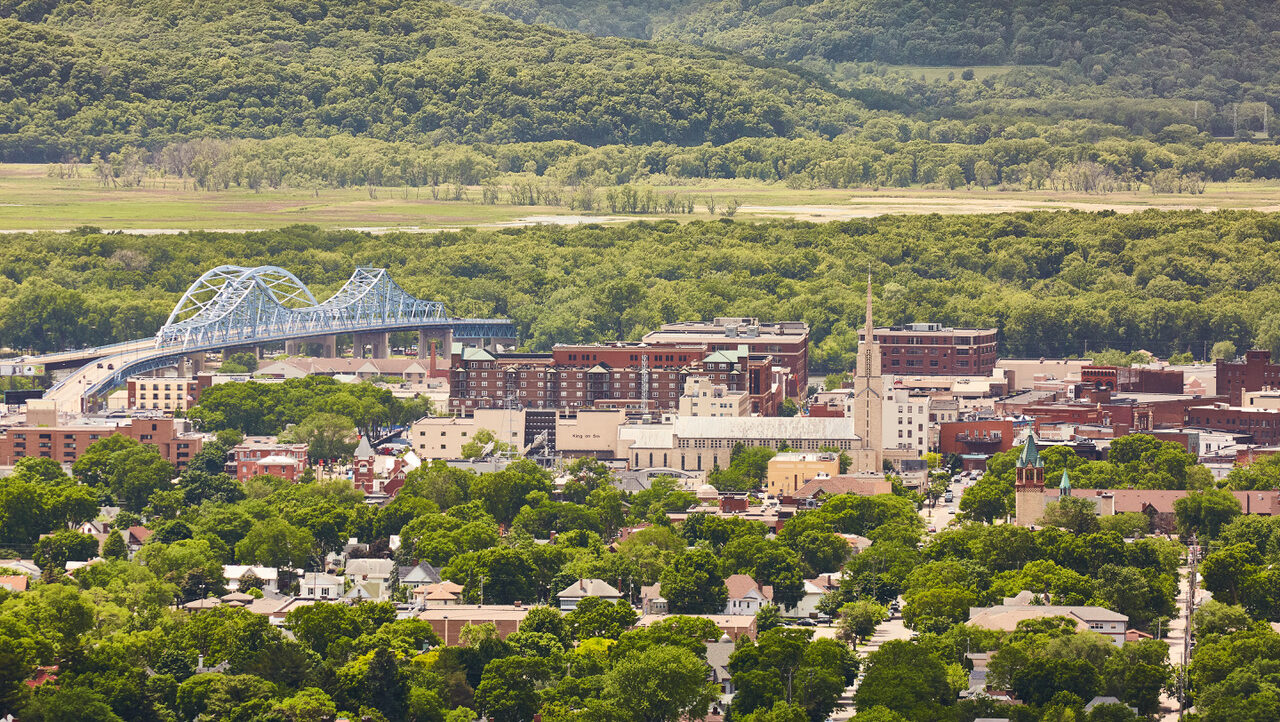 “Since its dedication in 1962, the Cathedral of St. Joseph the Workman has been an icon of faith and a magnificent place of worship. As the Mother Church of the diocese, she has welcomed all within her walls, whether generations of faithful parish families or visitors from afar,” says Cathedral Rector Monsignor Richard Gilles.
“As Christ is the cornerstone of our Faith, our cathedral is the cornerstone of our diocese.”

Unfortunately, time and harsh weather have taken their toll on the iconic building. Only 10 years after it was built, a passer-by noticed stones at the top of the spire were protruding and the mortar was missing. A repair team was brought in and the steeple was shortened about 10 feet. About eight years later, it was noticed that the cross on top of the steeple had rotated and additional work was required.

In recent years, increasingly serious issues began to crop up. “Five years ago, water started showing up in the cathedral in places that it shouldn’t,” says Tammy Becker, a parishioner since 1988. “Two years ago, several pieces of heavy stone fell from our steeple in front of the church. When they hit the ground, they shattered and sprayed pieces.” It was decided to erect a 23-story scaffolding tower around the steeple for the safety of passers-by below. A drone was sent up to assess the damaged steeple. “The pictures showing big cracks and fractures in the stones were heartbreaking,” Tammy remembers. In fact, the rapid acceleration and depth of the fractures were alarming. Left unattended, the damage would only increase, as would the cost of repair.

In January 2020, discussions began on how to approach the needed repairs. “We were given a quote for the Band-Aid approach, but how long would that Band-Aid last?” Tammy says. “It was so sad it broke my heart. I just couldn’t believe that our church was falling apart.” Fully restoring the steeple came with a price tag of $4.5 million; additional repairs throughout the cathedral sent the restoration costs soaring to $6.1 million. “Someone said, ‘We’re going to need a miracle,’” Tammy remembers. “But our parishioners and people throughout our diocese and community all stepped up. They wanted the cathedral to stay here. This church is the Mother Church of the diocese. This steeple is part of the landscape of the city, a symbol of strength to the community.”

Monsignor Gilles was appointed rector in July of 2020 and took the lead on the “Christ Our Cornerstone Campaign,” developed to raise the needed funds to restore the cathedral to its former glory. He knew he had his work cut out for him. “It was a good thing I didn’t know everything this restoration effort entailed when I became rector,” Monsignor Gilles says with a chuckle. “I suppose it’s a little like parents having their first child. You’ve never done it before, and you learn as you go along. Looking back, truly it was the grace of God that got this project off the ground so quickly.”

Monsignor Gilles says the effort at restoring the cathedral was not just some exercise in fundraising, it was an exercise in building themselves up as the Body of Christ as a parish. “Instead of detracting from that effort to build up the Body of Christ, the restoration project actually helped that along,” he reflects. “The amazing thing about the people of God in this parish and the city and the diocese is that so many people said, ‘I’m on board with this and I believe in this.’”

Steve Mar-Pohl, president of InSite Consulting Architects, who leads the restoration project, agrees. “I’m very proud of our community, our family, for supporting this restoration. I think that it’s a sign of any healthy family that when somebody is in trouble, you rally and make the effort, whatever it takes, to make sure that they’re OK. I think that’s what we’ve seen here, and I’m proud to be part of this process.”

As of late summer, the Christ Our Cornerstone Campaign saw a 90 percent parish response rate and raised 103 percent of the campaign’s goals, with donations from more than 2,300 individuals and organizations.

“These stones mean nothing if the spiritual stones of the temple of the Body of Christ, the Church, are not being built up.” – Monsignor Gilles

Steve says the project has remained on target since it began and even though massive amounts of work have taken place, most of it won’t even be noticed. “More than 95 percent of all the changes will never be seen, as they are repairs to damaged materials and corrections to the underlying construction,” he explains. “In other words, there should be no obvious changes to the exterior of the building.”

His crew is taking great pains to perfectly match the color, cut and structure of the stone that is being replaced. In total, 229 stones, weighing a total of 70,000 pounds, have been removed and replaced with new ones. “My experience as a building stone and mortar specialist, as well as a technical historic architect, naturally leads me to a healthy respect for the integrity of the materials and architecture as a whole,” Steve says. “We are truly working to conserve every possible piece of the cathedral, inside and out, and replacing only those materials that have failed with materials that match precisely.”

The inside of the cathedral is also getting a facelift. Damaged marble thresholds were replaced with new matching marble, while new tile flooring was installed in the Blessed Sacrament Chapel. Tile also was put in the Bishop’s Vestry, where previously there had been green carpet. Overhead, a dramatic feature of the cathedral is the use of gold leaf throughout and, in particular, on the vaulted ceiling of the Marian Chapel. Leaks in the roof had caused the plaster under the gold leaf to fail. Once the plaster was repaired, new gold leaf was applied.

Water leaks also caused staining on some of the limestone in the interior of the sanctuary and choir loft. These areas were cleaned and restored to their original condition. The extensive restoration and upgrades to the exterior will stop any future leaking, staining and damage to other interior elements.

Steve says that the work being done will last for generations to come. “This is a ‘forever building.’ When the project is complete, we will leave the cathedral in a condition where it will be much easier and less expensive to maintain. It will be more energy efficient and will resist the forces of nature and the weather much more effectively. With proper maintenance, this should be an 80-to-100-year fix.”

Monsignor Gilles is looking forward to a striking change to the cathedral that is not part of the restoration project but has taken place simultaneously. A beautiful 10-to-12-foot crucifix was commissioned and carved in Italy and will be suspended above the altar. “The focal point of any Catholic church ought to be the altar of sacrifice,” he explains. “It is the primary focal point of our cathedral. Therefore, the altar ought to stand out with undoubted significance. It visually has to pull everything in this very large space to it and into it. With a new sanctuary crucifix suspended above the altar, it will very much draw attention to it as being inseparable from Calvary’s Sacrifice.”

The majority of the restoration project is scheduled for completion by the end of December and Tammy is excited to step into the fully restored cathedral. “I cannot wait to walk into those front doors, to come straight down that aisle towards the beauty of that altar!” she says. “This building is like our children, it’s a part of all of us. We all have special, intimate memories of things that happened within these walls—weddings, funerals, sacraments for our children.”

Anita Froegel, a parishioner for more than four decades, is especially grateful to have the steeple restored. “I live in an apartment a few blocks from the cathedral. In the winter, when the trees are bare, I can see the steeple from my window. I think of my Faith whenever I see it. It’s a connection with God,” she shares. “It will be a joy to see the steeple again in all its glory and hear the bells ring.”

Monsignor Gilles agrees with Anita and Tammy’s sentiments. “I didn’t visit the cathedral until I was in college. It was the largest church I had ever been in and I was in total awe, struck by its grandeur,” he remembers. Even now, as he calls the cathedral “home” as its rector, he still feels that same sense of awe. “The more I’m here, the more comfortable I am. But I keep appreciating other facets of the cathedral that only come in time spent here. Just the other day, as I was praying in one of the pews, light shone through the stained-glass windows, and it was magnificent. I was able to appreciate that added artwork from God, even if it only lasted a minute or two.”

Monsignor Gilles says everyone is grateful the magnificence of the cathedral has been restored. “It’s not just the building, but it’s everything that this place represents. These walls mean nothing, these stones mean nothing, if the spiritual stones of the temple of the Body of Christ, the Church, are not being built up,” he reflects. “And that’s what is happening and it’s palpable and people get it, they understand it. The people’s generosity has been astounding and I thank God for them believing in this restoration. I just cannot thank them enough.”